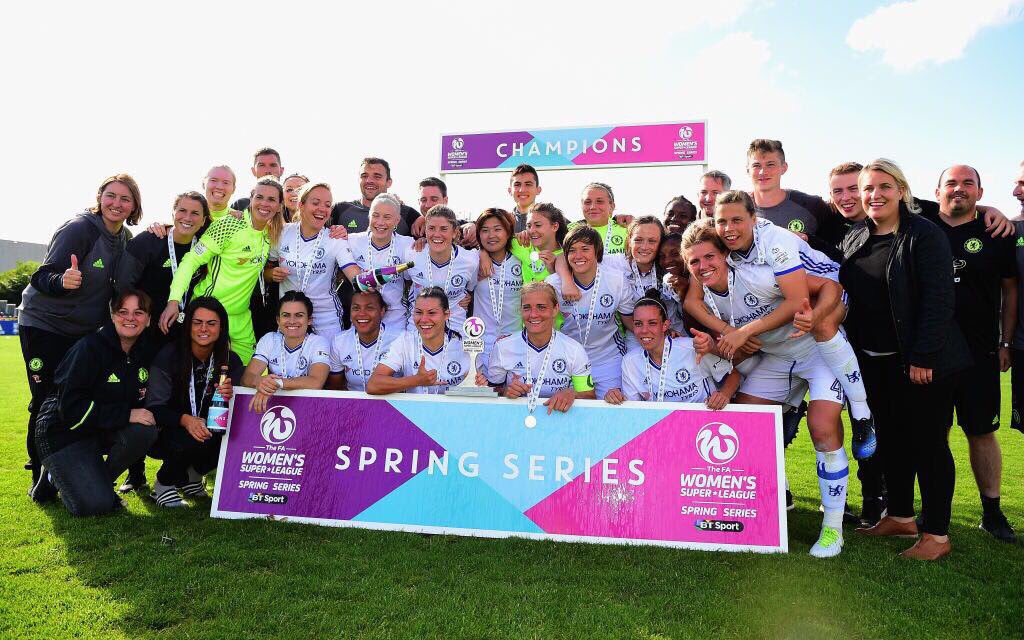 The road to the FA WSL championship will include many players as yet unknown to most fans in the states.

The FA WSL is a couple of games in and Manchester City and Chelsea are already setting the bar high with two wins from two and a hatful of goals between them – 21 across four matches to be exact.

You’ll know that Crystal Dunn and Heather O’Reilly are both playing their first full season in England, but who are the other players to look out for in this season’s WSL? We pick one player from each club, plus an additional player who is destined for great things this campaign.

For those in England, Leah will be well known having broken into the Arsenal team three years ago shortly after her 17th birthday.

Now 20, Williamson offers Arsenal versatility, but her best position is in the center of midfield, sitting in front of the back four. Her ability to break up play and start moves with her range of passing, allows for the more attack minded Jordan Nobbs and Danielle van de Donk to roam around in front of her.

Williamson is one of England’s most talented youngsters, but the last couple of years have been hindered by injuries. This could be the year that she makes her mark, and if she can perform consistently, make a case for a senior England call up. Much will rely on how head coach Pedro Losa uses her, having deployed her across the backline at times, which does not utilize her qualities.

One of England’s most talented young defenders, it leaves many scratching their heads as to why Mannion has not received a senior England call yet.

Softly spoken off the pitch, Mannion is an intelligent player on it, with a determination that sees her win more challenges than she loses. She has been part of a fairly solid Blues backline for the last few years that has made the team hard to beat, and she is only going to get better.

The England youth international did show a few nerves in this year’s FA Cup Final defeat to Manchester City – but so did her teammates. Mannion is a reliable and solid center back that is once again sure to have a good season and make a claim for a senior England call.

Carla came through the same youth system at Arsenal as Leah Williamson, and the pair looked destined to be the future of the Gunners. However, Humphrey was loaned out to Doncaster Rovers Belles last year, and after only making some brief appearances during the recent Spring Series with Arsenal, it was time for the attacking midfielder to move on.

She has landed at a good club in Bristol City Women and will be one of the club’s key players. Following the loss of Claire Emslie (see below), the former Arsenal midfielder will be looked upon to be a creator of goals, while chipping in with a few herself. Her talent is without question, and this could be the year she finally makes her mark on the WSL.

Chelsea are overwhelmed with talent from back to front and ask most fans of women’s soccer to name a member of the squad, few outside of England would name the Chelsea right-back.

But in Blundell, Chelsea have a future England international. The unfortunate position that the 23-year-old finds herself in is she is competing with Lucy Bronze for a starting spot with the Lionesses.

However, with Chelsea, she is almost always a starter, and when needed, can also operate at left-back. She is part of a well-organized and well drilled backline, and while she is a more than capable defender, she is also an asset when supporting the attack – especially with Chelsea having some of the best wingers in the league.

Forward Chloe Kelly is currently embarking on her second loan spell with Everton from her parent club Arsenal, and the England Under-19 international is already off the mark with a goal this season – netting in her side’s 2-1 loss to Birmingham last week.

In Kelly, Everton have a genuine predator in the box and a live wire who will cause defenses no end of problems. Her movement is exceptional and her finishing, still with time to improve, is lethal. If it were not for the signing of Vivinanne Miedema and form of Jodie Taylor, Kelly would be fighting for a starting spot at Arsenal.

However, while there is no room for her at the London club at present, Everton will benefit from her season long loan, but she will need supply from the team’s midfield, otherwise she could be an isolated figure.

Young winger Charles has some big shoes to fill out wide for Liverpool following the departure of EURO 2017 winner Shanice van de Sanden, who signed for Lyon before the new season.

The England youth international has bags of talent and showcased her attributes during the recent Spring Series, repaying the faith Head Coach Scott Rogers placed in her during the pre-season competition.

Charles is raw at 18-years-old and still has plenty of room for development, but her ability to run with the ball at pace will cause full backs plenty of problems this season. Sharing the flanks with Wales winger Tash Harding makes Liverpool a dangerous team out on the flanks, and Charles will be expected to play her part in creating opportunities for the likes of Jess Clarke up front.

For some, heads may have turned when star-filled Manchester City Women signed Scottish international Claire Emilie from Bristol City Women, but the move was very much testimony to her time at the West Country club.

Emslie was a key cog in the wheel in Bristol’s promotion back to FA WSL1 following her arrival from Hibernian Ladies, and while she has so far been deployed right of a front three at Manchester City, she has an eye for goal that makes her a focal point for defenders.

With Nadia Nadim due to arrive in January, the young forward is going to have one of Europe’s best to learn from. This, in addition to her already rapid development, ensures she is likely to be one of City’s unsung heroes this season.

A former Arsenal and Birmingham forward, Linnett is looking at this season to really kick start her career. The former England youth international has played and scored in the Champions League and is a forward with pace and energy.

Injury has curtailed her career so far and having looked like someone who would go onto achieve England honors, she has slipped down the pecking order and is now playing catch up.

But an in form Kirsty Linnett is difficult to stop, and with three England internationals playing behind her in midfield – Jade Moore, Jo Potter and Fara Williams – Linnett should get plenty of supply and chances created.

So you thought Heather O’Reilly and Crystal Dunn were the only Americans in the WSL? Well, they were until Zaneta Wyne signed for Sunderland before the new season.

The French-American midfielder has played in the UEFA Women’s Champions League with Apollon and has joined the north east club from Icelandic club Thor.

The University of New Mexico graduate is an attack minded midfielder and will add much needed firepower to a Sunderland side that will be looking to once again prove a few people wrong with many tipping them to struggle this season. Wyne’s experience in Europe is sure to be of benefit in the Sunderland midfield.

You can’t put a list together and not include a keeper, and Yeovil are fortunate to have a talented one in the form of Megan Walsh.

The England Under-23 keeper and former Notts County Ladies stopper, was recently in Taipei representing Great Britain at the World University Games and was also named the club’s Player of the Spring Series earlier this year.

Walsh will have plenty to do with Yeovil having by far the smallest budget and squad in the division, but in head coach Jamie Sherwood, they have a leader who will install a strong work ethic into his side. He will be relying on keeper Walsh to showcase her talent this season in order to help Yeovil compete, and it’s unlikely that she will let him down.

It’s hard to believe that Walsh is only 20 because her influence on a squad filled with senior internationals is almost unrivaled. Sitting just in front of the back four, Walsh faced some of her sternest tests in the UEFA Women’s Champions League last season – most notably against Lyon – and did not look out of place.

Calm and composed on the ball, with an array of passing that can quickly turn defense into attack, Walsh is also tenacious off the ball, and stood up well to the challenge of Dzsenifer Marozsan in Lyon during City’s 1-0 win in France earlier this year.

Senior England caps are a case of when and not if when talking about Walsh. Manchester City Head Coach Nick Cushing has done a tremendous job nurturing her and managing her workload, and now it is time for Walsh to kick on and really show why she is considered one of the best midfielders in England.