Thursday Roundup: Morgan Brian not expected to play for Red Stars this weekend

Morgan Brian’s hamstring won’t have her ready for the Red Stars semifinal against the Courage. (Photo copyright Steve Bruno)

Morgan Brian is not likely to play for the Red Stars this weekend, head coach Rory Dames told a national conference call on Wednesday. Brian has been hampered by a hamstring injury throughout the season.

The Red Stars acquired Brian from the Dash at the end of August knowing full well that her short-term health was in question. She appeared in the first two Red Stars matches just after the trade, which were followed by a call-up to the U.S. national team. Brian has not suited up for the Red Stars since returning from international duty.

Dames did not rule out Brian being healthy in time for the NWSL Championship should the Red Stars get by the North Carolina Courage this weekend. He added that he expected Alyssa Naeher and Sam Johnson to be good to go on Sunday. Naeher has been banged up since a collision against Brazil in August. Johnson smacked heads with Hayley Raso last weekend and came out of that match. 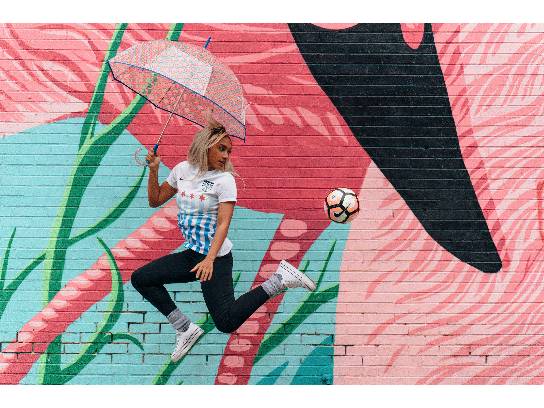 The Chicago Red Stars and The Annex are auctioning off prints to raise money for recent tragedies in the United States. The Annex helped roll out the Red Stars’ 2017 jersey by joining forces with 11 players to for photographs in different parts of the city. Those prints, part of the club’s #CRSNeverSleeps campaign, are now being auctioned off. The auction will include two signed prints of each photo and one complete set of the 11.

The bidding can be found here.

The final two Round of 32 ties at the UEFA Women’s Champions League played their first legs on Thursday and both are there for the taking.

Olimpia Cluj 0, Rosengard 1: Ebba Wieder scored in the 35th minute to stake Rosengard to a 1-0 away win. Former NWSL players Erin McLeod and Ella Masar both played 90 minutes with McLeod earning the shutout in goal.

Stjarnan 1, Rossiyanka 1: Captain Liudmila Shadrina scored three minutes into the second half to give Rossiyanka a pivotal away goal and a share of the opening leg spoils. Stjarnan went ahead on 22 minutes when their captain, Katrin Asbjornsdottir converted from the penalty spot.