Also in today’s Roundup, Montpellier upset in first day of UWCL knockout play and Lori Lindsey gets an award

Tom Sermanni has signed an extension with the Pride. (AP Photo)

The Orlando Pride announced Wednesday they have signed head coach Tom Sermanni to a contract extension. The 63-year old Scotsman was named the club’s founding head coach on October 20, 2015 and will make his playoff debut on Saturday in Portland against the Thorns.

“Keeping Tom was a no-brainer for our club,” Pride CEO Alex Leitão said. “He is one of, if not the, most accomplished coaches in soccer. His track record speaks for itself. I can’t wait to see what Tom and the Pride do in the upcoming NWSL playoffs and beyond.”

The Pride made a bright start as an expansion club in 2016 starting 6-6-0 before the Olympics took the entire back line and injuries dogged them the rest of way. The club finished 6-13-1. This season began slow but the arrival and integration of Marta, the return of Alex Morgan, and the switch to midfield for Alanna Kennedy triggered a dramatic turnaround. The club is 10-3-4 in its last 17 matches and are in the playoffs for the first time.

“It’s exciting,” Sermanni said of the contract extension. “I’ve had a great two years here. This gives me another opportunity to continue to build the squad; to build the culture and philosophy around the team and just to be a part of this great organization. Orlando has felt like home to me virtually from day one when I came here. It’s wonderful. There’s the stadium, there’s the people in the club and the community as well. It’s a mix of all of those things that makes this club unique. And having been in football for some considerable time, you don’t often get that complete environment and that’s what makes this club very special to me.”

Later Wednesday, Sermanni was named a finalist for NWSL Coach of the Year. The Pride’s announcement did not include specifics about Sermanni’s extension.

Ada Hegerberg had a hat trick for Lyon on Wednesday.

Montpellier’s first trip to the Champions League in eight seasons opened with a surprising, 1-0 defeat at home to Russian side Zvezda 2005. Linda Sembrant scored an own goal in the 64th minute to account for the only goal. The French runners-up must now flip the result when they travel to Russia for the second leg next Wednesday. The loss was the second tough one in a row for Montpellier. After winning their first three league matches convincingly they were run over at home 5-0 by Lyon on the weekend.

This one had the feeling of an anomaly after Zvezda won without registering an official shot. Montpellier attempted a dozen corner kicks to none for their guests. Zvevda keeper Iryna Zvarich made 7 saves for her clean sheet.

In other Wednesday Round of 32 Champions League action:

Medyk Konin 0, Lyon 5: Ada Hegerberg scored twice in the opening half hour and completed the hat trick in the second half as Lyon rolled to open pursuit of an unprecedented third straight crown. Wendie Renard and Eugenie Le Sommer also scored.

Chelsea 1, Bayern Munich 0: Drew Spence scored on 10 minutes and Chelsea’s defense did the rest in a 1-0 victory over Bayern Munich. The return leg in Germany will be one of the hottest contested return legs next week. Crystal Dunn came off the bench in what was her first appearance for Chelsea this season.

St. Polten 0, Manchester City 3: Demi Stokes, Steph Houghton, and Nikita Parris scored over a 12-minute span in the middle of the first half to put Manchester City in firm command heading home.

Avaldsnes 0, Barcelona 4: Lieke Martens scored in the 19th minute and the Spanish leaders put the match—and likely the tie—away with three goals in the final 20. Toni Duggan, Andressa Alves, and Mariona Caldentey were the other scorers with Mariona doing her damage as a substitute.

BIIK-Kazygurt 3, Glasgow City 0: The champions of Kazakhstan opened the second half with three goals in the first quarter hour to take a sizeable lead with them to Scotland. Begaim Kirgizbaeva, Kaelyn Korte, and Gulnara Gabelia provided the goals. Despite the deficit, Glasgow made only one substitution on the day.

Apollon 0, Linkoping 1: Kristine Minde’s 58th minute goal put the Swedish champions on the front foot ahead of their home leg.

Gintra 1, Zurich 1: The sides traded quick goals in the first half but the story was Martina Moser missing a 67th minute penalty that left things even. Moser put Zurich on top in the 18th minute only to have Zenatha Coleman equalize five minutes later.

LSK 0, Brondby 0: A combined 20 shots were not enough to put a goal on the board leaving it all to be played for in a week’s time. LSK outshot the visitors 11-9 in the only scoreless draw on the day.

Ajax 1, Brescia 0: Linda Bakker broke the deadlock in the 88th minute to lift 10-woman Ajax to the win. Marjolijn was shown the door in the 21st minute leaving Ajax to go with 10 and they pulled out the win despite being outshot 11-3.

Atletico Madrid 0, Wolfsburg 3: Wolfsburg’s quick start to the season continued with a 3-0 away victory. Goals by Pernille Harder and Ewa Pajor were sandwiched around an own goal charged to Silvia Meseguer. Wolfsburg are unbeaten without having conceded a goal in four games to open the German season.

Fiorentina 2, Fortuna 1: One of the more even matches of the day saw Valery Vigilucci and Ilaria Mauro stake the hosts to a lead before Signe Bruun pulled back what could be a key away goal in the 73rd minute. 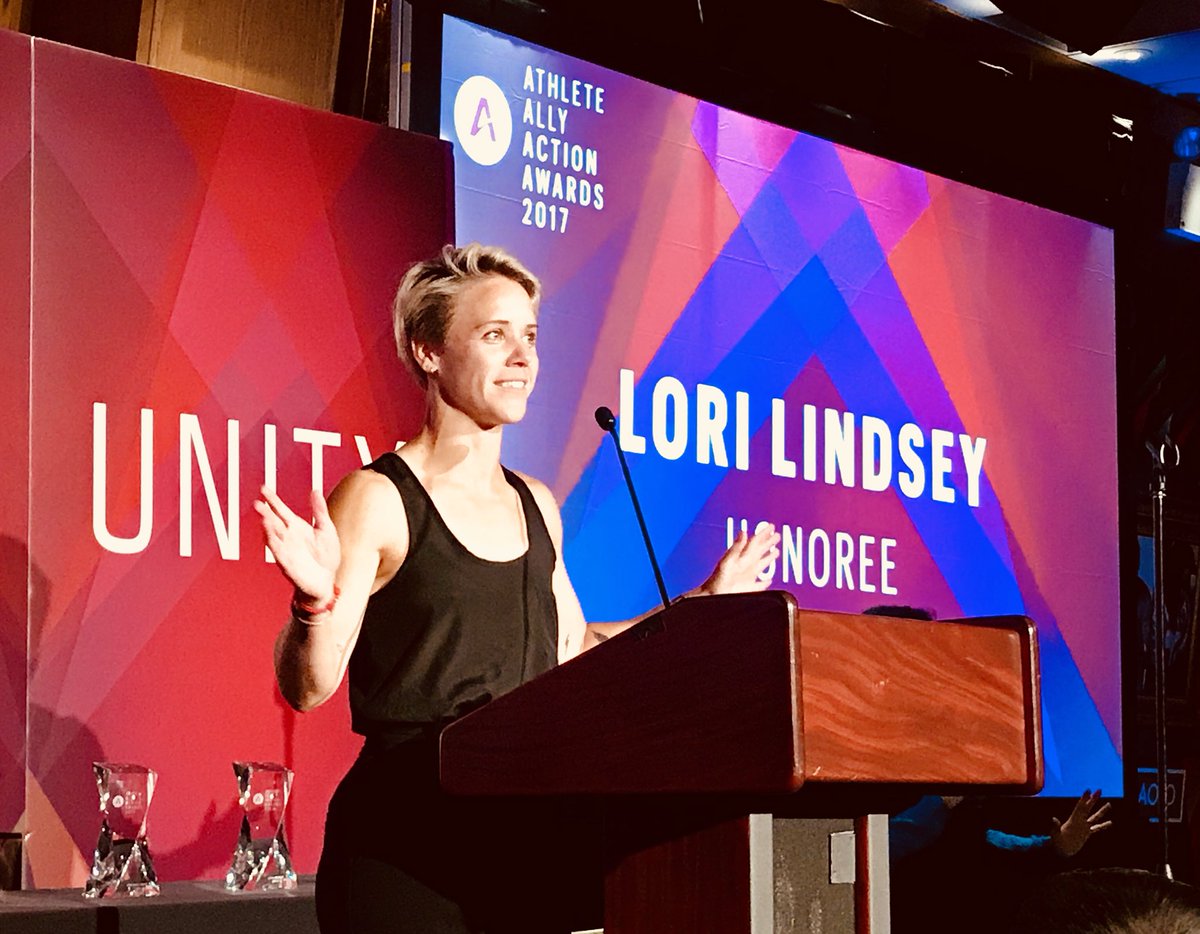 Former USWNT and Washington Spirit midfielder Lori Lindsey was honored in Tuesday’s Fourth Annual Athlete Ally Action Awards, which celebrate individuals and organizations who worked in 2017 to create LGBT-inclusive athletic environments and help eliminate anti-LGBT prejudice. Athlete Ally is a nonprofit organization which works to promote awareness and foster inclusive sports communities, specifically aimed at eliminating homophobia and transphobia. Lindsey has been involved in sports activism, with an emphasis on gender equality and LGBT rights, since her retirement from professional soccer. This year, she joined the Equal Playing Field Initiative and played a soccer game on top of Mount Kilimanjaro to raise awareness on gender inequality in sports.  She is also an Athlete Ally ambassador  and last month took place in the Global Goals World Cup, a United Nations-sponsored 5v5 soccer tournament dedicated toward raising awareness and creating world peace.

Lindsey made her USWNT debut in 2005 and was part of the silver medal squad in the 2011 Women’s World Cup. She captained the Washington Spirit during their inaugural NWSL season and retired from soccer in 2014.