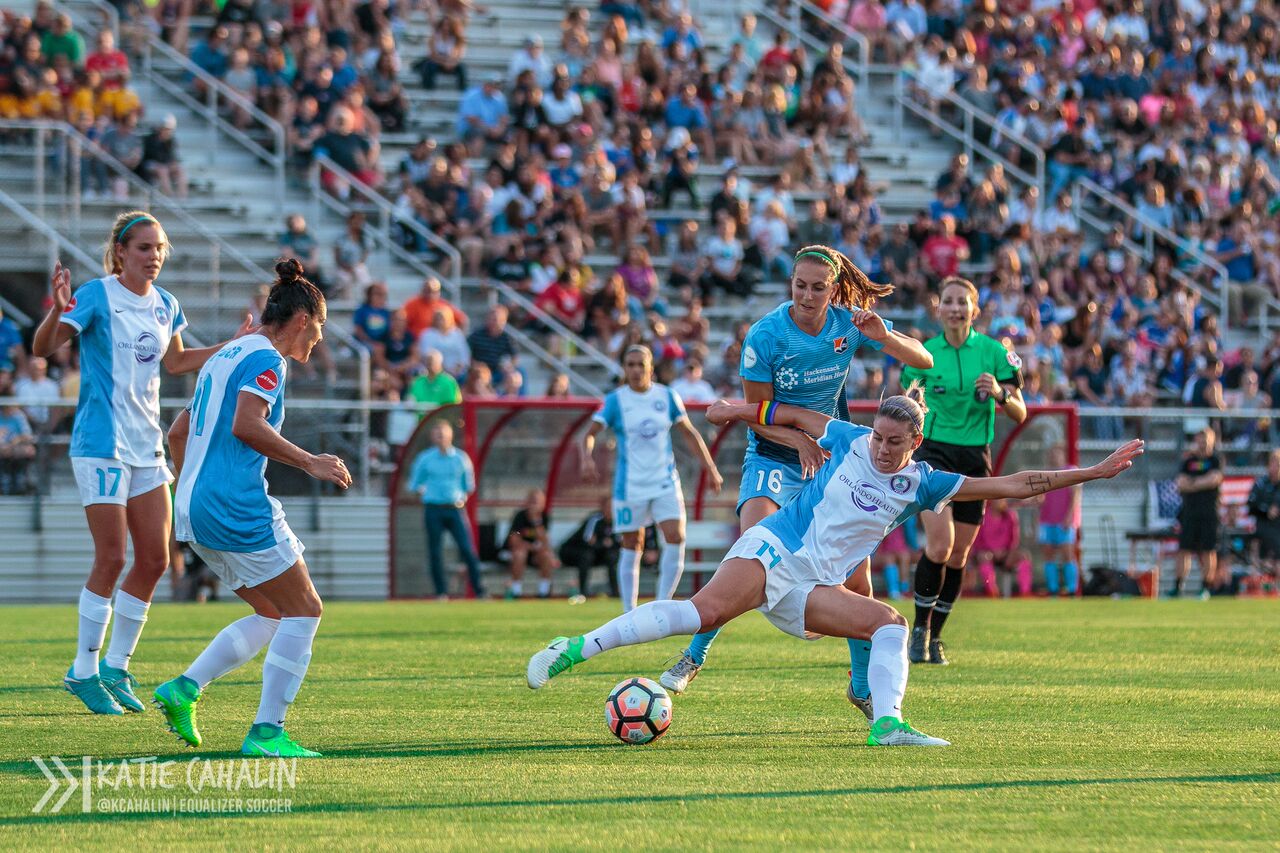 The last weekend of regular season action brought everything we were hoping for it to bring… not to mention 23 goals in six games. It left fans with exactly what they needed as they get ready to watch their favorite teams in action this coming weekend as the semifinals kick off. Better yet, it left me with 23 goals to dig into in the last week of the Kronick Report for the 2017 season. Let’s dig into my favorites from the week — Kennedy’s stunner, Huerta’s long-distance strike, and Kerr’s record breaker.

Kennedy stuns Courage with late game-winner to help Pride lock in No.3 seed

Alanna Kennedy helped secure the Pride’s No.3 seed in the NWSL Playoffs with her late goal this past weekend (photo copyright Katie Cahalin for The Equalizer)

What Happened: In the 91st minute, Australian defender Alanna Kennedy put a free kick in the back of the net to help the Pride to a 3-2 defeat against the first-place North Carolina Courage in the last game of the regular season. The win secured the No. 3 seed in the playoffs for Pride who are set to take on Portland this weekend.

How It Happened: This Kennedy strike was one for the 2017 NWSL season highlight reels. Not only the beauty of her finish from a direct free kick, but that was made even more impressive given the fact that it was stoppage time and with one goal, the Pride would be able to take that No.3 seed and avoid the No. 1 Courage in the semifinals. Like the announcers say in the replay, in that situation, anyone would’ve guessed it would be Marta who steps up to take it. Instead, she lines up next to the ball but it’s Kennedy who’s given the opportunity. Kennedy steps up and from outside the 18 yard box launches one into the upper 90 near post corner. She placed the ball upper 90 with such composure and her strike was flawless as she leaned over the ball and curved it just right so it was able to sneak inside the post. Overall, it was a big strike from a big player in an even bigger moment! This gets my GOTW vote for sure.

The very definition of late game drama.@AlannaKennedy gets it done for the @ORLPride. Pride up 3-2! #NCvORL pic.twitter.com/xeJPv2OXav

What Happened: Sofia Huerta scored one from distance in 71st minute to bring the Red Stars within one with 20 minutes to go. Chicago ended up falling to Portland 3-1 and, thanks to a Pride victory, ended up taking the No. 4 seeded going into this weekend’s semifinals where they will face the North Carolina Courage.

How It Happened: Just a few minutes before we see another glimpse of Huerta-finishing brilliance, Vanessa DiBernardo launches one from just outside the 18 yard box that hits the crossbar. A misclear from the Portland back line finds Lindsey Horan a little bit outside the 18 yard box. As she turns to continue to try and clear it out of the Portland defensive end, Sofia Huerta completely bodies her USWNT teammate to win the ball back for Chicago. Huerta takes one touch towards goal, picks her head up, and lets one loose 25 yards from goal. Her shot goes upper 90 and right past Portland keeper Adrianna Franch to get Chicago on the board for the first time all game. Huerta does a great job to stay with the play after DiBernardo’s shot rebounds back into action. She takes advantage of Horan’s poor shielding and jumps on her the second she gets the ball, facing her own defensive end. She’s able to muscle Horan off completely and a few moments later, launch a magnificent strike from distance into the back of the net. This is definitely not the first time we’ve seen Huerta hit a ball like this from a distance like this. Time and time again she proves that not only can she set up teammates, but she’s also a lethal finisher herself, especially from distance. 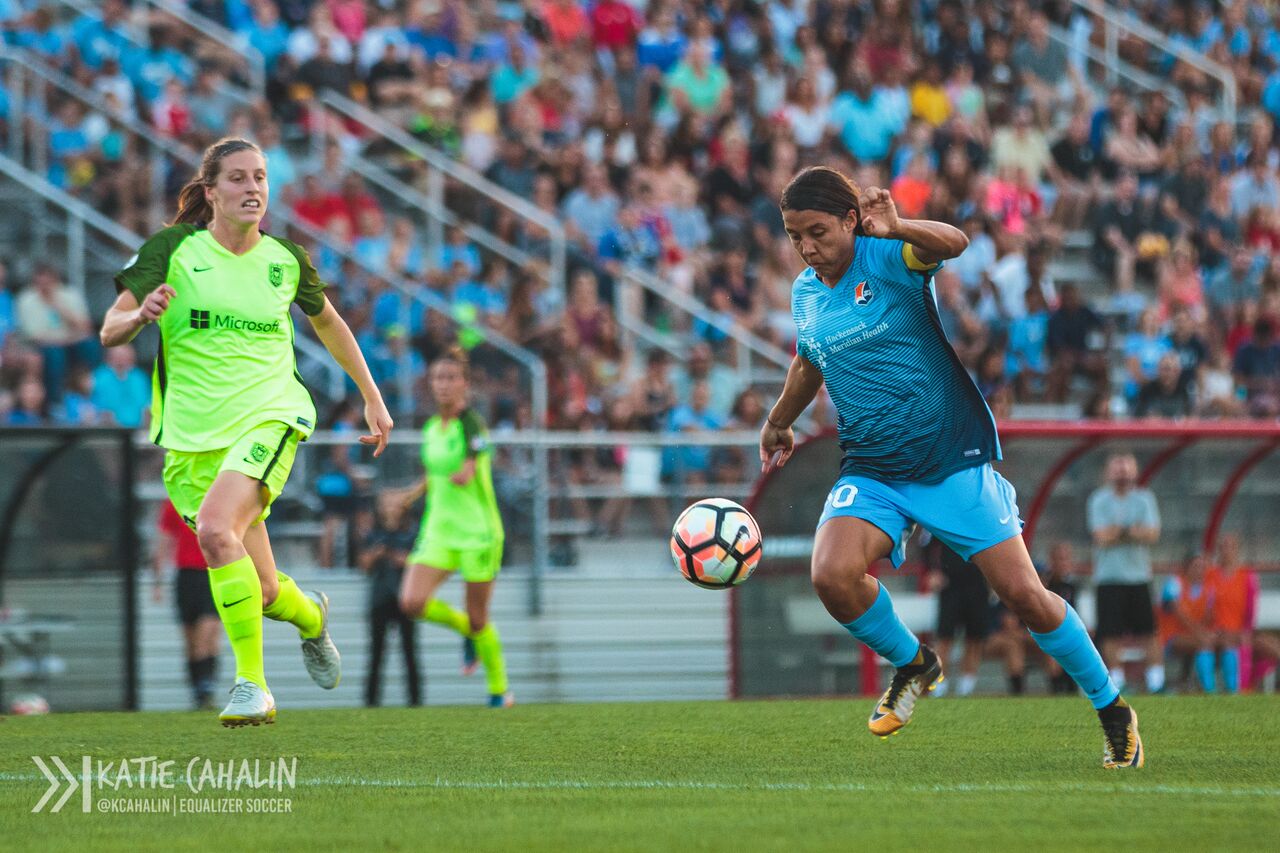 Now, you can’t mention the best goals from the last week of NWSL regular season action without acknowledging Sky Blue FC forward Sam Kerr’s finish that gave her a permanent place in the record books as she notched her 17th goal of the season, a new NWSL season record.