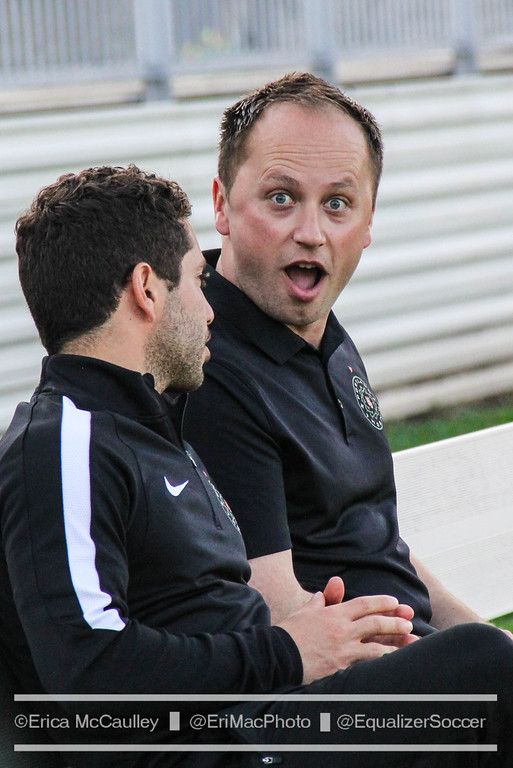 Mark Parsons says if Tom Sermanni thinks the Thorns get preferential treatment at home he should re-watch last season’s semifinal.

Upon hearing that Tom Sermanni had fired a salvo regarding the officiating for Saturday’s semifinal between his Orlando Pride and Portland Thorns FC, Mark Parsons took to the bit emoji response. The Thorns coach fired off a text to his Pride counterpart saying, “I see you Tommy boy,” with a magnifying glass to accompany in.

Earlier in the day, Sermanni went on record as saying that referees tend to be intimidated by the crowd at Providence Park and as a result allow the Thorns to get away with more physical play than their opponents. His biggest concern ahead of the match, he said, was the welfare and protection of his players.

“If Tom is still a little bit worried about what will happen when he comes, maybe check out the semifinal from last year,” Parsons said during a conference call to preview Sunday’s match. The reference was to the Thorns’s 4-3 semifinal loss to the Flash in 2016 after which some Thorns thought they had been hard done by some referee decisions, or lack thereof.

“I think the league and PRO (Professional Referee Organization) always have a challenge trying to raise the standard,” Parsons added. “I think the level has gotten faster and better this year. The challenge is always going to be there.”

Parsons said he has been busy preparing for the match but hoped Sermanni’s comments would not be a factor in determining when the whistle is blown. “We’re getting ready. Let’s hope the referee doesn’t fall for the trap that’s been opened for him. Unfortunately from the semi last year we’ve got a bad taste. We just want to see en even reffed game.”

On a later conference call, Sermanni echoed Parsons’s suggestion that the game is quickly becoming quicker. “I have the utmost respect and for the most part I have a very, very good relationship with them. What I’ve seen in this league is that football is a professional sports now – with that the standards and the stakes get higher. With that the physicality of the league has increased. So there is a delicate balance between being physical which is important and committing fouls.”

Speaking on the soccer elements of the match, Parsons is aware his side will have to be at their best to avoid a repeat of last year’s upset loss.

“Orlando are a very, very attacking team and they’re well coached,” he said. “It’s going to be an unbelievable match up. A great matchup that will bring out the best in us and I’m sure force us to find a new level.”

In their two seasons in NWSL the Pride have yet to beat the Thorns. The sides played to a 0-0 draw two weekends ago in Orlando, the first time the Pride took a point in the head-to-head. Thorns defender Meghan Klingenberg said conditions were hot that afternoon and that she felt neither team was at its best. Several players from both clubs had played international friendlies during that week including an Australia-Brazil doubleheader in the land Down Under.