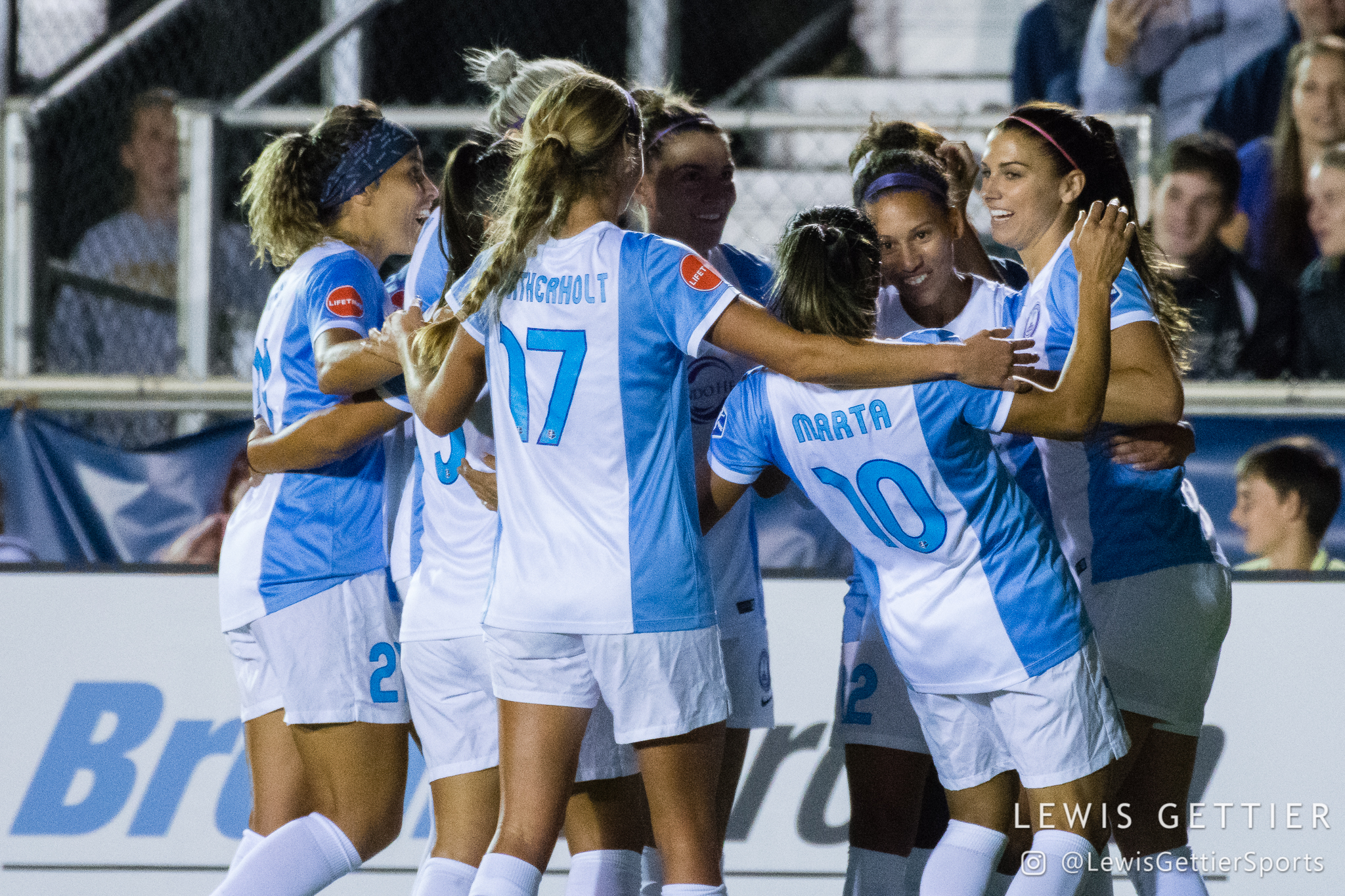 Late drama saw the Orlando Pride take all three points from the North Carolina Courage, ensuring the two will not meet again in next week’s semifinals. The Courage practiced a little bit of squad rotation after their Wednesday night game, while the Pride rolled out in their normal starting XI. Prior to kickoff, acting NWSL Commissioner Amanda Duffy presented North Carolina captain Abby Erceg with the NWSL Shield, which they clinched in their midweek match in Texas.

The Courage started out on the front foot, forcing Pride goalkeeper Ashlyn Harris into a very early save on Kristen Hamilton. They forced Orlando into midfield turnovers and controlled the game for the first twenty minutes, earning an early corner although nothing came out of it. The Pride attempted to cause damage in transition but couldn’t link up in the final third.

However, the tide turned in the 22nd minute. Alex Morgan slipped the ball to Chioma Ubogagu, who continued up the left flank before sending in a low cross. Kristen Edmonds, making a diagonal run to the center of the box from her right back position, flicked it to the far post with her back to goal, and it snuck in past Katelyn Rowland.

.@Kris10edmonds didn't want to be left out of the #NWSL scoring frenzy. She puts the #ORLPride up in North Carolina with this goal. #NCvORL pic.twitter.com/fpDKMXxofB

The game opened up after this, although the Courage continued to dominate despite the score line, forcing Harris to work, including another great reaction save on Hamilton. The Pride struggled to maintain possession and build up the attack, and when they did, the Courage defense often snuffed it out before they could threaten Rowland. Similarly, although the Courage were more relentless in their attack, the Pride’s backline did just enough to stymie most, though not all, of their attempts.

Camila had to be stretchered off in the 35th minute, replaced by Rachel Hill, after a rough collision left her on the ground. This was the first example of an increasingly physical game.

The second half began like the first, with the Courage controlling the ball, and again the Pride got an early goal. In the 51st minute, Marta received the ball at midfield, dribbling up the pitch before engaging in a give and go with Morgan that resulted in Marta getting the ball back inside the box. With a step on her defenders, she showed no hesitation in sending in a low roller that slipped under Rowland to double the Pride’s lead. The goal moved Marta into second place for goals scored in the NWSL this season, behind Sam Kerr.

Looking to lock down that 3️⃣ seed.

Morgan, Marta, goal. It's 2-0 to the visiting @ORLPride. #NCvORL pic.twitter.com/f9EWFvbW2P

Continuing the theme of the night, Orlando began to play more confidently and with more intent, but North Carolina flipped the script in a span of five minutes. In the 62nd minute, Taylor Smith dribbled across the top of the box before slipping it forward to Lynn Williams, who took a few shots to separate herself before launching the ball at the goal, beating Harris at near post.

Game on in North Carolina. @lynnraenie gets one back for @TheNCCourage.

Just a few minutes later, Ali Krieger was called for tripping up Debinha inside the box, and a penalty kick was awarded to North Carolina. After Harris was given a yellow card, Williams took the kick and tallied her brace for the night.

.@lynnraenie. Again. This time on the penalty kick to even things up in North Carolina.

At this point the game began to go much more end to end, and although few calls were made, neither side shied away from going after each other and using their bodies to get in the way. Again, the defenses stepped up with last ditch efforts time and again, with North Carolina seeing more of the ball and subsequently the attack.

The game looked destined to end in a draw as they began five minutes of stoppage time. In the 91st minute, Abby Dahlkemper took down Jasmyne Spencer at the very edge of the box. Alanna Kennedy took the free kick and sent it direct on goal, curling it over the wall and into the upper 90, far from anywhere Rowland could reach.

The very definition of late game drama.@AlannaKennedy gets it done for the @ORLPride. Pride up 3-2! #NCvORL pic.twitter.com/xeJPv2OXav

With the 3-2 win, Orlando takes third place and will travel to Portland next weekend for next Saturday’s semifinal. This plus Chicago’s loss earlier today means that North Carolina will welcome the Chicago Red Stars for Sunday’s semifinal. The winners of these games will meet in Orlando for the NWSL Championship on Saturday, October 14.