Orlando Pride forward Jasmyne Spencer has been an influential part of the post-season bound Orlando Pride’s offensive system in the 2017 season. With one regular season game to go and a playoff spot on lock, the 27-year old who has 3 goals and 4 assists in 12 starts  is looking forward to continuing the team’s recent success. We caught up this week to talk all-things Pride post-season run, what it’s been like represent Orlando, where you would find if it wasn’t on the soccer field and much more!

Hannah Kronick: Exciting weekend for you guys! What was that feeling like when you realized you guys had clinched a spot in the playoffs?

Jasmyne Spencer: It was amazing! It was kind of a sigh of relief but also pure excitement for what’s to come next. The response from our city has been amazing. They’ve been incredible throughout the past two years in their support for us. We’re so happy that this year we were able to build upon last year and finally make that playoff berth.

HK: With your game against the Courage coming up and on paper essentially having nothing to lose, what’s the mindset there going up against the Shield winners for one last time before the post-season begins?

JS: We want to keep building on our momentum and go in there and try to win. We have a really nice unbeaten streak right now, I think it’s up to eight games, so we don’t want to lose that especially going into the playoffs. It might not mean anything on paper, but to us, it means everything.

HK: What does this playoff run mean for you guys knowing you could play a potential championship match in your home stadium?

JS: It’s been everything. It’s been our biggest force of motivation this whole season because we know that the championship is in our own city and our own stadium and we want to be there in the end. We definitely don’t want anyone else lifting the trophy on our home soil! It’s been the biggest thing and to have the chance to do is amazing!

HK: What’s the best part for you about playing for the Pride and representing Orlando?

HK: What’s it been like to play with such talented attacking forces like Marta and Alex Morgan?

JS: It’s been great. I’ve learned so much and I am getting better every day. They challenge you and bring the best out of you and I’d like to think that I help bring the best out of them. It’s a lot of fun! It gets super competitive, but that’s what makes you a better player. You can’t really ask for much more! 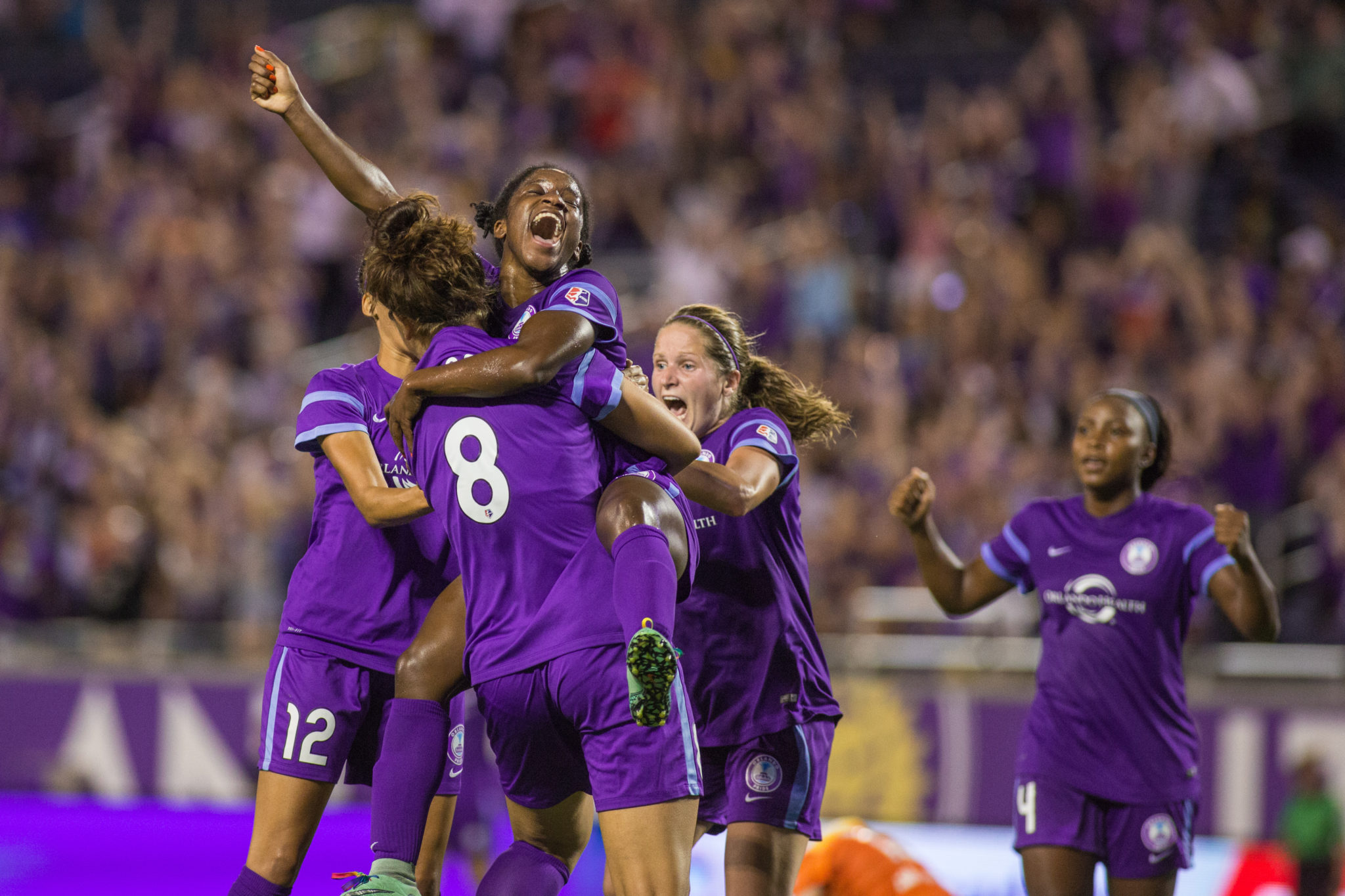 HK: What’s the coolest thing you’ve done in Orlando outside of soccer?

JS: Okay, so this is kind of outside of soccer, but not really. There’s this really cool walking street right downtown. It’s full of our supporters and some of the local pubs where fans can watch our away games. It’s a really cool atmosphere down there and if you’re lucky enough to catch it, when it’s full before or after games, it’s really awesome! Sometimes people recognize you! It’s such a passionate city and because we don’t have any other major sports besides us (men’s and women’s soccer) and basketball and the Magic are in season opposite of us, so when we are in-season, the whole city is focused on us and then men’s team!

HK: Your NWSL journey has involved time spent with the Spirit, Flash, and now the Pride. What’s it been like to play for three different NWSL clubs? What have you been able to bring with you from one transition to the next?

JS: It’s been challenging, but I think that’s just the life of a professional soccer player and a women’s professional soccer player at that. We all play because we are passionate and we love the game. For me, I’ve never really had an easy route at becoming a professional and staying a professional, so my journey has been super important to me and I hope that it inspires the next generation. Every day you play and every game you get to play in, you’re writing your own legacy and I hope that when I am done playing, I get to share my legacy with other people like my family and hopefully future children where I can look back and see that I helped pave the way for others. My path was somewhat difficult and challenging and somewhat different than others, but in the end, I made it and I embraced it and it’s made me a better person and player.

HK: What do you think the storyline will be with the close of the 2017 NWSL Season? There was so much buzz when it kicked off re: awareness, growing the fanbase, national TV rights. What do you think is the best success story for the league this year? What still needs to get better?

JS: I think probably the best success I can think of is that women’s soccer is here to stay. It’s something that has really emerged on the scene the last couple of years. The league has been at the forefront of that. We’ve always had a successful national team and I think that having a domestic league has only strengthened the awareness of how good women’s soccer is in the US and how good of an opportunity it is for young girls to start playing. I am happy to be a part of that and I know we all are. I think going forward, it’s just about continuing to invest in women’s soccer in this country– growing the league, growing the fanbase, getting as much marketing and media out there so that people know that the league exists and that the women playing in it are these amazing athletes and role models — and all of that only comes with greater investment. I hope that for the next cycle, our national team continues to do well and the better they do, the better it is for all of us! It keeps bringing that awareness to how incredible our sport is here in the US.

HK: If you weren’t playing professional soccer, what would you be doing?

JS: I’d either be a veterinarian or a marine biologist. Something in animal care, spending time outside everyday!

HK: Do you think that either of those career paths are something you might pursue later in life, post-soccer career?

JS: Definitely! I do a lot of volunteering at animal shelters and I’ve been continuing my education in the animal care field for a couple years now, so hopefully when I am ready to retire, it’s a bit of a seamless transition for me!

JS: I’ve actually been binge watching One Tree Hill! I am really late on that, like a decade late! I just never watched it when it was on regular television and I am obsessed now. It actually goes off Netflix on the 1st so I am really binge watching to try and finish before it expires. And right now, I am most likely to record MTV’s The Challenge, but at the end of October, it’s absolutely The Walking Dead.