Run of Play: Team-by-Team Defender of the Year 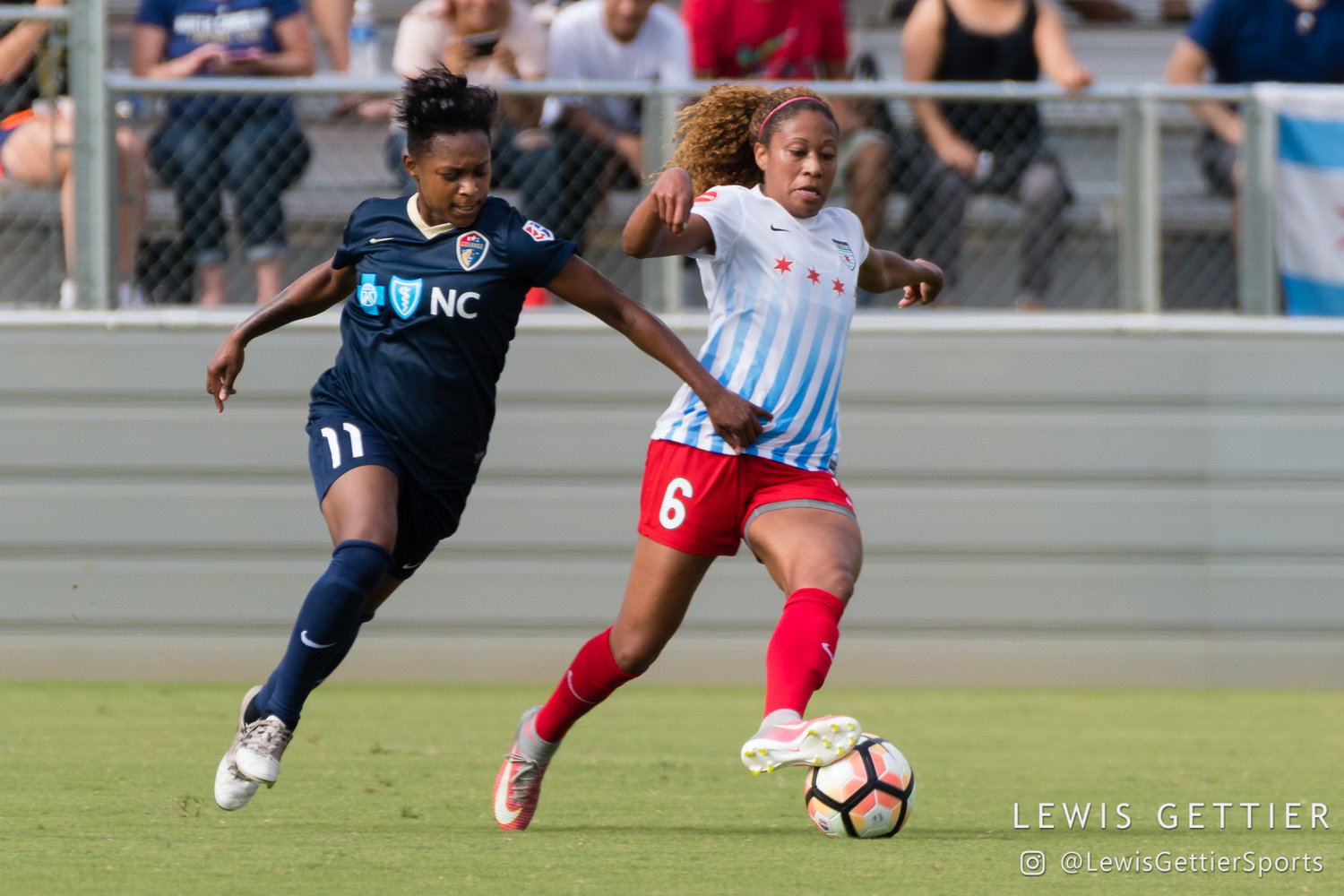 Continuing my team-by-team awards series, today I look at defenders. Collectively thus far this season, defenses have given up 317 goals. 24 of those have been scored by players who play primarily as defenders. Modern defenses are expected to contribute on both ends of the pitch, and balancing the act is an art that not all manage. Those below have done just that, and several are in contention for Defender of the Year.

Osyter made her debut for the USWNT on April 6, 2017. In addition to her three seasons in the NWSL, she also spent in the W-League in Australia with the Newcastle Jets during the NWSL off season. (Credit: ISI Photos/Mike Gridley)

This year saw Oyster develop into a leader even as it coincided with a move to a new team. If a fire breaks out, which has happened more than once on the injury-riddled Boston backline, you can count on Oyster to be there to put it out, a big part of the reason the Breakers sit at the bottom of the standings but are in the middle when it comes to goals against. Oyster is the stay at home defender, the one counted upon as the last stand, and she’s grown into that responsibility. Her decision making has improved in leaps and bounds, and she’s often tasked with restarting an attack. Oyster leads the defense in touches and percentages of successful tackles, by far.

Although hampered by some recurring injuries, Chapman is never less than entertaining. She’s an aggressive attacking fullback who loves to get up the pitch and is a constant pest to any marauding wingers.

Short is one of the best 1v1 defenders in the league, which is why she’s spent the last year cementing her spot as Jill Ellis’ first choice left back. Rarely does anyone get around her, and her speed allows her to run down the forwards who have. Her tenacity has helped Chicago earn second in the league for least number of shots faced, both total and on target. While less strong on the other end of the pitch, she has put up one assist and one goal for the year. Her three appearances on the NWSL Team of the Month, more than any other defender, will certainly have her in the running for Defender of the Year.

Naughton’s ascendance into starter quality was one of the reasons Julie Ertz was able to move into midfield. She has more clearances (by far) and a higher percentage of both duels won and successful tackles than any of the other regular starters on the backline. 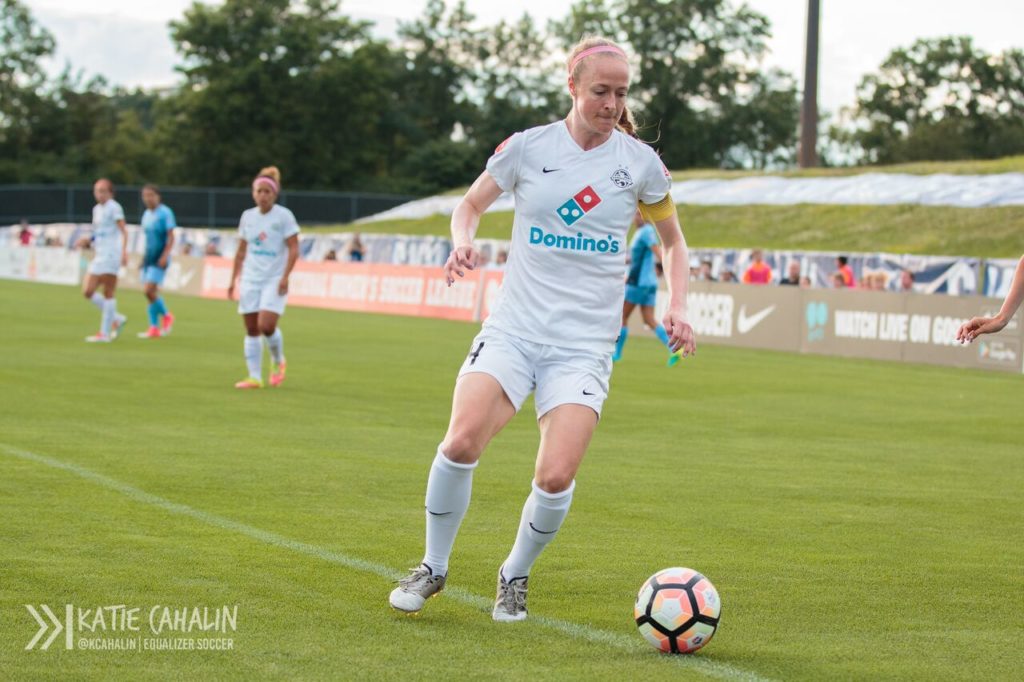 It says a lot about Sauerbrunn that whenever she makes so much as one mistake, we tend to remark that she’s not up to her usual standard. A team-wide run of poor play in July notwithstanding, she should be back in the running for Defender of the Year, an award she’s won three out of the four completed NWSL seasons. No one reads the game better than the veteran centerback, who has shut down the league’s best forwards, including Sam Kerr, despite her well-known lack of pace. Her importance is reflected in the statistics, recording more clearances and a higher percentage of successful tackles than any other defender. Sauerbrunn’s leadership keeps the backline compact and in shape, and her ability to ping a long ball with precise delivery has led to two assists. She also has one goal for the year and has been named to the NWSL Team of the Month twice.

If Sauerbrunn is the most intelligent defender in the game, Averbuch comes in second, rarely caught out of position. She’s won more duels than anyone else on the team and has lived up to her reputation as a set piece specialist with one assist and one goal. 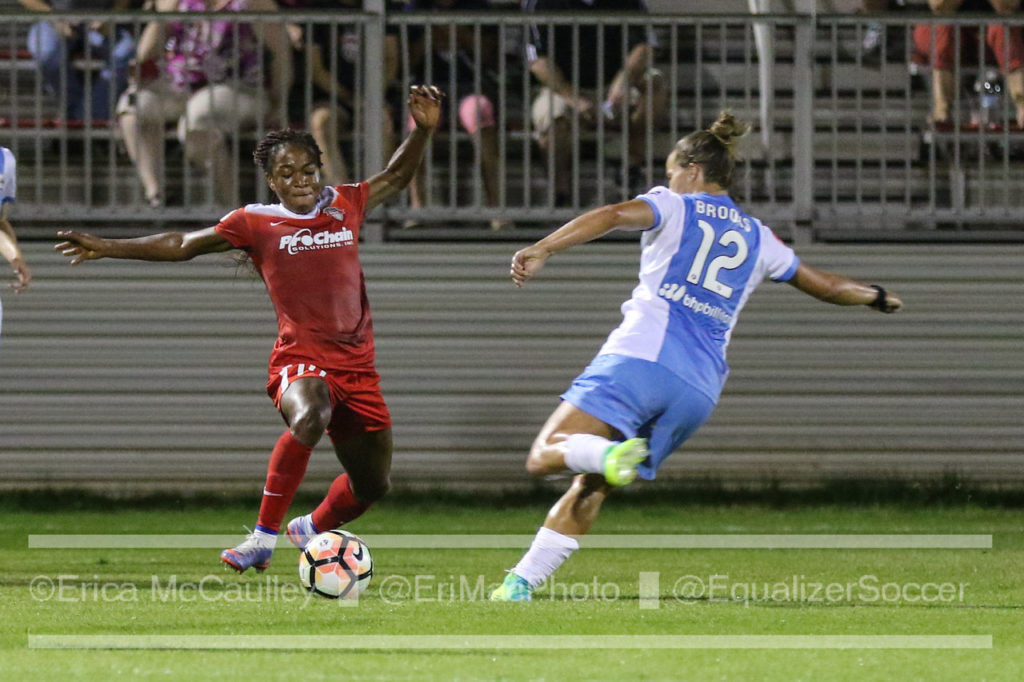 Amber Brooks is a midfielder. Amber Brooks is also Houston’s best defender. The uncharitable may say the Dash set the bar low, but that’s first of all insulting to some good players and second of all not giving Brooks enough credit. A fine defensive midfielder by trade, moving Brooks to centerback was a bold move considering the Dash spent two international slots in the offseason precisely to shore up central defense. When that wasn’t panning out, Brooks moved back, and she’s been a revelation for the struggling team. She is fearless and uncompromising, earning her both the highest percentage of duels won among field players and the most fouls conceded on the team. She also brings a needed element of leadership to the backline, especially in front of a rookie keeper. Brooks has one goal and two assists for the year and was named to the July NWSL Team of the Month.

Probably underrated, Levin has been the most consistent part of Houston’s backline and plays endline to endline, demonstrating a strong sense of when she can make a run and when she needs to get back. 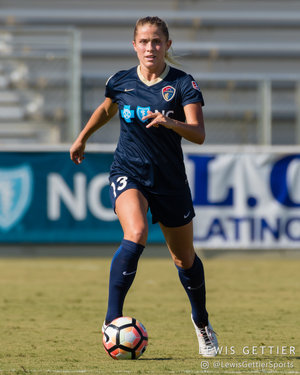 NC Courage defender Abby Dahlkemper (13) during a match between the NC Courage and the Washington Spirit in Cary, NC in Week 17 of the 2017 NWSL season. Photo by Lewis Gettier.

When I tried to pick one of these over the other, I simply couldn’t. The reason the Courage defense is the best in the league is because of their teamwork (the same could be said for the Courage as a whole), and to separate the two proved impossible. While Erceg is undoubtedly the leader, Dahlkemper continues to grow into her own and has earned an extended look on the USWNT. They are about as good a tandem as you’ll find and rarely allow themselves to be split. They even team up on corner kicks – while Dahlkemper takes them and has some of the best delivery in the league, if a bit floated versus driven, Erceg is always a target. Dahlkemper has one assist, while Erceg has two assists and one goal. Dahlkemper has been on the NWSL Team of the Month twice. 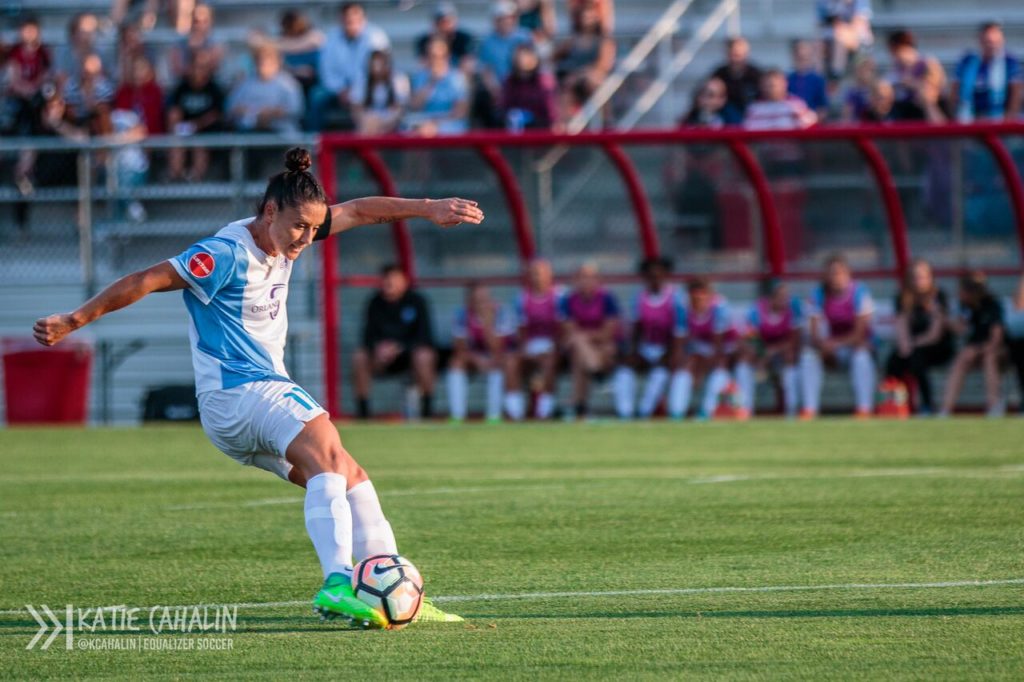 With her teammates looking on from the sidelines, Ali Krieger plays the ball in for the Pride. (photo copyright Katie Cahalin for The Equalizer)

The Pride’s improved defense owes much to Krieger, who is playing out of her natural position of right back. In what could be a run at Defender of the Year, she has been all over the Pride’s backline, using a combination of speed and positioning to put out fires all over the place, while both her teammates and head coach Tom Sermanni compliment her vocal leadership. Her ability to intercept and take on opponents is reflected in her record of the highest percentage of duels won among field players and the highest number of clearances on the team. She is also the one most often tasked with restarting the attack, and her involvement has led to her claiming the highest number of completed passes in the league. Krieger has two assists for the year, is the only Pride player to play every minute of every game so far, and has been twice named to the NWSL Team of the Month.

The Australian is one of the best left backs in the world, and it shows. She seems to get up and the down the flank with impunity, working well with whomever is in front of her and delivering bombs into the box whenever she gets free. Catley was named to the August NWSL Team of the Month. 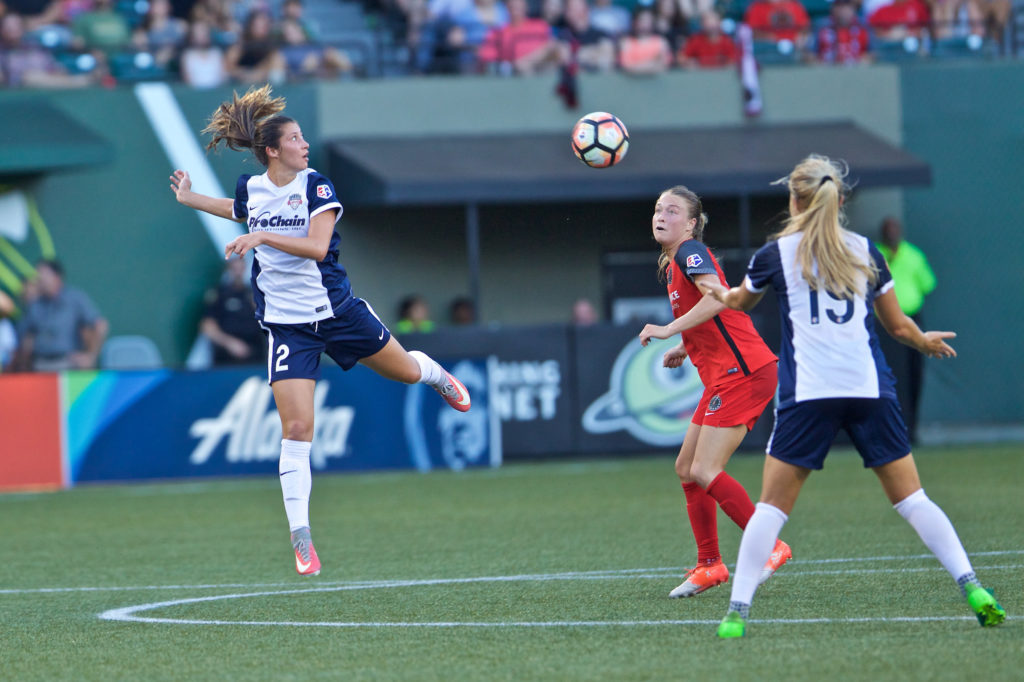 Emily Sonnett scored her third goal of the season in the Thorns’ 4-0 win over the Spirit. (photo courtesy Portland Thorns)

Much like the Abbys in North Carolina, Emily Sonnett and Emily Menges form one of the best partnerships in the league. They complement each other’s strengths and weaknesses and have a good sense of the other’s positioning. What gives Sonnett the edge is her much improved ability to go forward. Her decision making has improved leaps and bounds in her second professional season, and with that has come an awareness that she can push into the attack on the odd occasion. She has also become somewhat of a scoring threat, especially on set pieces, and has three goals and one assist for the year. Sonnett has been on the NWSL Team of the Month twice.

The centerback is about as solid as a defender comes. She has fantastic positioning and anchors the defense while Sonnett pushes up.

Stott made her way to Seattle via Australia’s W-League, where she won several championships with Melbourne City alongside several Reign teammates. Normally a central defender, she’s shown she can play fullback as well. Stott is the type of defender who is most bothersome to opposing forwards because she just always seems to be in the way. Solid and uncompromising, she’s quite good in the air, and on the ground she has a significantly higher percentage of duels won than any other field player on the team. Stott likes to get forward and can be a threat on set pieces, picking up one assist for the year.

The reigning NWSL Defender of the Year has actually improved over last year’s form, bringing the well-timed tackles she’s known for. Barnes also has more clearances than anyone on the team.

Kelley O’Hara was a big part of Sky Blue’s near miracle in Seattle on Saturday. (photo by Lewis Gettier)

O’Hara was not intended to play defense for Sky Blue this year, but she’s made her career on being versatile and willing to play where asked, so when injuries hit, she dropped back, and she’s been there ever since. She can be found all over the pitch, which is why she leads the league in touches per 90 minutes. Her connection with Sam Kerr has proven fruitful and greatly assisted Kerr, whether directly or indirectly, in her Golden Boot race. O’Hara is one of the most attacking defenders in the league but has the pace and stamina to race back when necessary. She also provides a veteran presence on a young team. O’Hara has three goals and two assists for the year.

Another versatile player, Skroski can play in central or outside defense. She is an unforgiving defender with fairly solid decision making. 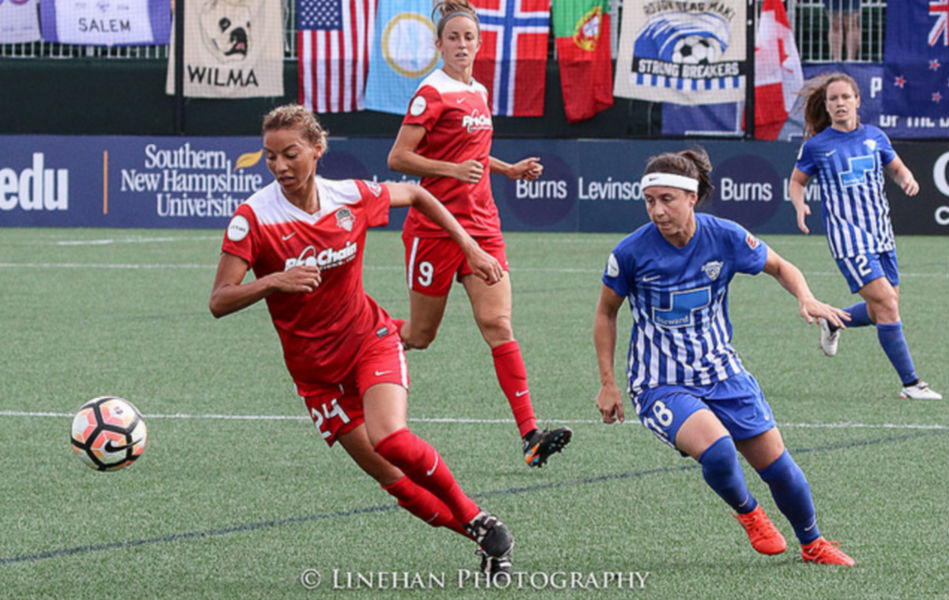 Estelle Johnson scored her second goal of the year in the Spirit’s 2-2 draw with the Breakers. (photo copyright Linehan Photography for The Equalizer)

Any NWSL award for Most Improved would have to consider Johnson, this as she’s playing a position she hasn’t in years. She has easily been the Spirit’s most consistent defender, rewarded with two appearances on the NWSL Team of the Month. Time and again, she is in the right place at the right time. Johnson is simply relentless at right back and extremely involved, with more touches than anyone else on the team, as well as a higher percentage of duels won. Not previously known as a scoring threat, she has two goals for the year.

It was immensely rewarding not only to see Dydasco return to the field after last season’s heartbreaking ACL injury in the NWSL Championship, but to see her pick up where she left off. Primarily a left back although she can play both sides, she has demonstrated her athleticism up and down the pitch.

The Kronick Report: Daly rockets highlight reel-worthy header in Dash defeat
The Lowdown: Someone tell us, how much should we care about the NWSL Shield?