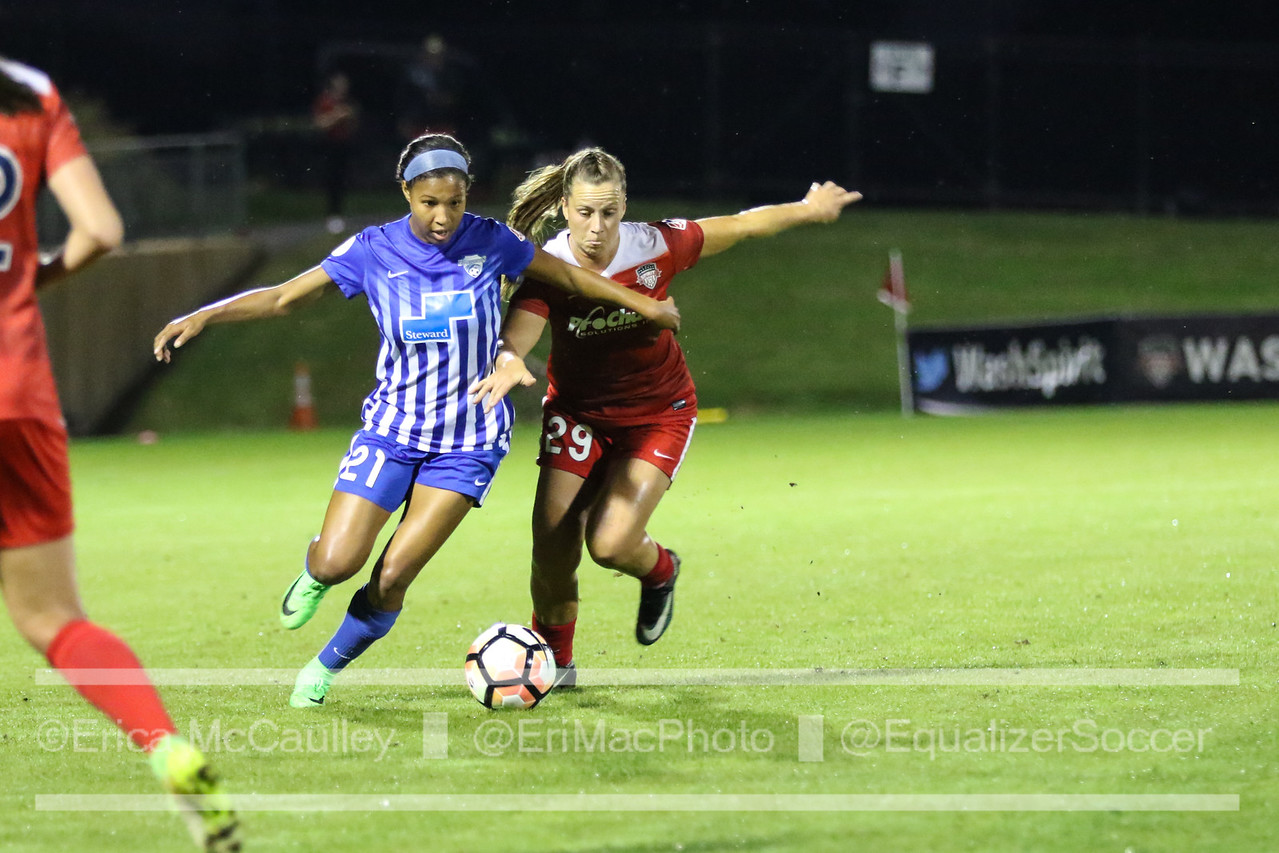 On Saturday night,  the Washington Spirit and Boston Breakers played a game that meant so little but paradoxically also meant so much. With the 3-0 loss, the Spirit are now in line to finish last place for the season and securing the first draft pick in next year’s draft barring expansion.  Here’s a look at some of the takeaways from Saturday’s battle for the wooden spoon.

Boston Finally Gets a Win Away

According to the book Soccernomics, playing at home is worth about half a goal. Even factoring in the benefits of playing on your home turf, the Breakers’ away record since 2014, it’s just head scratching. Boston came into the weekend with a real possibility of finishing the year without an away win, the only team in the league without one.

While a lone win doesn’t wipe away a disappointing season, as a bit more was expected from Boston after a promising start, it’s not meaningless. Certainly, from a psychological standpoint, putting this talking point to bed is a positive. If the Breakers are going to climb out of the bottom of the NWSL table next year, wins on the road undoubtedly have to increase.

“It’s taken us twelve attempts didn’t it?,” Breakers coach Matt Beard said about the road win. “We wanted to win.  We want to win next weekend so we can finish on 22 points. It will be our best points total since 2013. It’s literally taking our 22, 23 games, watching training for the things we work on religiously week in, week out starting to just become like clockwork and that was pleasing. So it was always going to be an up and down year because of the changes. We should be in a better position we know that.”

Errant passes, especially in each side’s attacking third of the field, seemed to be the theme of Saturday’s game. Forcing the offensive part of the game is a recipe for disaster in just about any sport that involves that particular action. Saturday was a prime example of what happens when teams connective play breaks down by an effort to score quickly. The result was one of the most boring 45 minutes in the NWSL this season. The first half ended with just one shot on goal.

In the second half, Boston was able to address their problems better than the Spirit and got their goals in quick succession by getting consistently into the Spirit’s final third. Washington, meanwhile, struggled to string any passes together in its attacking area until the final quarter hour or so of the match. At that point, Boston appeared to have the game at hand. Emphasis on appeared because the NWSL has had a penchant for crazy finishes this season.

“Seemed like we were doing a good job defensively when we won the ball passing out of pressure but then we really didn’t have any connectivity getting that second, third, fourth pass midfield,” Washington head coach Jim Gabarra commented. “It’s like we’d win it, break pressure and then it was like a straight ball, final ball and that’s not going to get you shots on goal. The game plan was to attack the flanks and we did not in the first half.”

Overall Coach Beard was pleased with the game but if you watched Beard on the sidelines the final quarter of the game or so you wouldn’t have known that.  He was often outside the coach’s box, nearly on the field, shouting instructions at his players.

You would also be forgiven for thinking it was his side that was down three goals to none. In those final 20 minutes, the Spirit, desperate to get back in the game push forward with everything they had as so often the losing side does. After the game he spoke about being disappointed in that final portion of the match.

“I was really disappointed in the last twenty minutes because we stopped doing everything we’d done until we went up 3 nil for me that was really frustrating so it’s taken a bit of a shine off of a good win for us but it will be a lesson learned especially for the young players you know?,” Beard said. “ At no point can you switch off, can’t you stop playing just because of the scoreline.”