More than midway through the NCAA season, conference play is going strong for some teams while others are just getting started, with long-term sights being set for the conference and NCAA tournaments that are quickly approaching. At the end of Week 6, only one team was left perfect, another’s undefeated streak ended, and many more added to their win totals. Here’s a quick recap of some of this weekend’s collegiate woso action.

The University of Tennessee entered Week 6 as one of only two teams still perfect on the season. That all changed Thursday night when the visiting Auburn Tigers handed them their first draw of the season. Meghan Flynn put the Vols on the board in the 30th minute, but a late goal by Auburn freshman Jaelyn Gadson pulled the Tigers back level. Neither team could find the back of the net for the golden goal during overtime, and the Vols saw their perfect streak come to an end.

Unfortunately for Tennessee, their weekend went from bad to worse, losing 1-0 to the No. 3 South Carolina Gamecocks to also end the Vols’ undefeated streak. Although the Vols entered the match with 23 goals and the Gamecocks with 15, neither team could find the back of the net during regulation, and the game entered overtime in a deadlock. Halfway through the first overtime period, South Carolina freshman midfielder Lauren Chang put one away in traffic to score the golden goal and hand the visitors their seventh-straight win. For her performance in Week 6, Chang was named the SEC Freshman of the Week.

No. 17 Texas improved their season record to 10-0-0 after back-to-back shutouts against Big 12 opponents this weekend. The Longhorns first defeated Iowa State, 1-0, on Friday night, before upending No. 5 West Virginia by the same scoreline on Sunday.

The Longhorns followed up the shutout against Iowa State with another one against fifth-ranked West Virginia, who entered the 2017 season as the top-ranked team only to suffer their third loss to Texas. The two teams battled it out throughout almost all of regulation with neither team able to get on the board, but sophomore forward Cyera Hintzen finally struck gold in the 88th minute to give the Longhorns the upset over WVU. The Mountaineers’ loss was their first in the Big 12 since 2014, and it, combined with Tennessee’s draw against Auburn, kept Texas as the only NCAA Division 1 team to maintain a perfect record thus far. 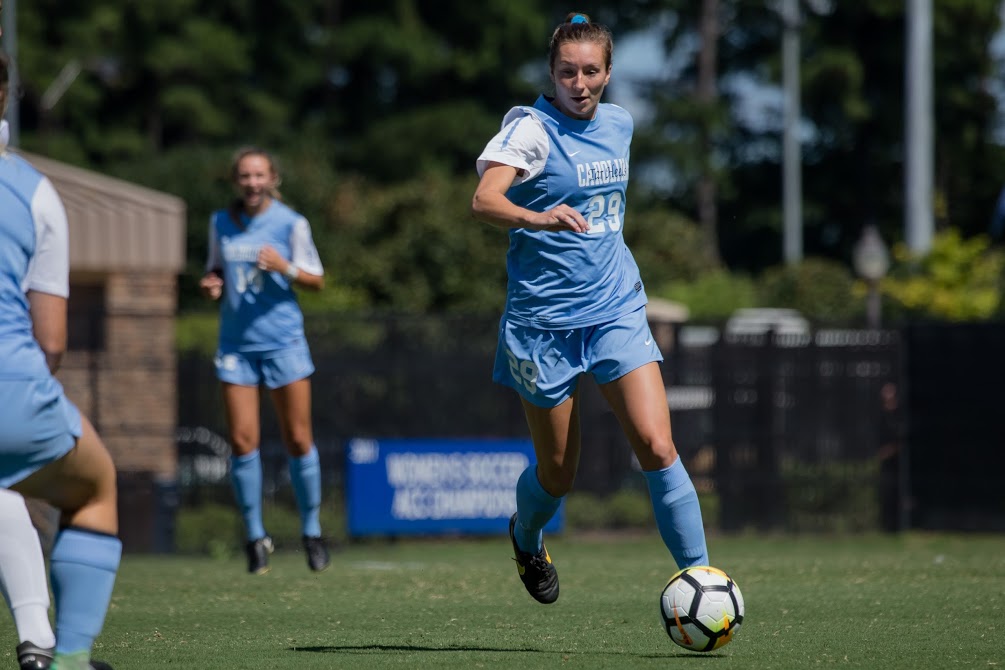 The No. 8 North Carolina Tar Heels escaped unscathed from arguably their most difficult eight-day stretch of the 2017 calendar. On Thursday night, UNC defeated the Clemson Tigers, 1-0, only to beat the Virginia Cavaliers, 2-1, on Sunday. Dorian Bailey came off the bench in both contests to score her second and third consecutive game-winning goals in the same eight-day time frame. She scored her first game winner last Sunday in UNC’s 1-0 win against Florida State, ending a 36-game home unbeaten streak for the Seminoles.

UNC opened Week 6 of the season on Thursday night against Clemson, who entered the weekend just inside the Top 20 at No. 19. Bailey scored in the 77th minute off a play that originated on a North Carolina throw-in deep in their attacking end. Madison Schultz fired off a shot that deflected off the crossbar, but Bailey headed the rebound past Tiger keeper Sandy MacIver for the game’s lone goal, improving UNC’s all-time record against Clemson to 31-1-1.

On Sunday Bailey worked her magic again, this time on the road against the 11th-ranked Cavaliers. Montana Sutton put Virginia on the board in the 12th minute, but UNC scored two goals in four minutes to come back for the conference win. The first of those goals was scored in the 24th minute by Alessia Russo, who sent a shot from about 14 yards out that deflected off a defender and into the left side of the goal. Bailey was credited with the assist on Russo’s goal before scoring one of her own just four minutes later. Neither team found the back of the net in the remaining 65 minutes, and Bailey’s 28th-minute goal turned out to be the game winner.

Elsewhere around the NCAA…

– No. 4 Duke earned its 10th consecutive win of the season, defeating Pitt 2-0 on Sunday. The win came just three days after the Blue Devils shut out Notre Dame, 3-0. In Thursday night’s win, Imani Dorsey scored her eighth goal of the season.

– No. 10 USC battled to a scoreless draw with No. 25 Utah in Pac-12 play, earning the reigning national champs their first tie of the year.

– Rutgers goalkeeper Casey Murphy earned her ninth consecutive shutout of the season in the Scarlet Knight’s 0-0 draw against Northwestern Friday night. That streak came to an end on Sunday in Rutgers’ 2-1 win over Illinois, but the Scarlet Knights have now outscored opponents 24-1 to remain undefeated on the season.

– Wofford College redshirt sophomore Hayley Younginer scored a hat trick in just over eight minutes during the Terrier’s 4-3 loss to UNCG on Friday night. Younginer now leads the nation in scoring with 16 goals for the season. Behind her is a three-way tie for second place between Florida State’s Deyna Castellanos (recently named a finalist for The Best FIFA Women’s Player of 2017 and a Puskas Award nominee) and Ole Miss duo Channing Foster and Cece Kizer, all of whom currently have 10.