Also in today’s Roundup, Laura Harvey would happily take a call about the England job, and the Thorns are set to part ways with Amandne Henry and Nadia Nadim

Sydney Leroux and four others stayed in the locker room during the national anthem on Monday. (Photo Copyright Erica McCaulley for The Equalizer)

Five starters elected to remain in their respective locker rooms while the national anthem was played prior to Sunday night’s Reign-FC Kansas City match at Memorial Stadium. Megan Rapinoe, who made headlines by kneeling during the anthem twelve months ago, was joined by FCKC players Yael Averbuch, Sydney Leroux, Becky Sauerbrunn, and Desiree Scott. A few other players not in the lineup also waited until the anthem was finished before taking the field for the game. It was the only NWSL match in which players elected to stage any noticeable form of protest surrounding the national anthem.

The anthem protests took on a new life across the NFL over the weekend after president Donald Trump called for players who kneeled during the song be fired. Additionally, the Los Angeles Sparks remained in their locker room during the anthem ahead of Game 1of the WNBA Finals, and Bruce Maxwell of the Oakland Athletics became the first MLB player to take a knee.

“I have a baby and I want him to look up to me and be proud of who I am and what I stand for,” Leroux toId Sounder At Heart after the match. “I think that speaks volumes to have other people who aren’t necessarily women of color to come and say, ‘No, something needs to change.’ I’m so honored to play with people like that.”

NWSL has not commented on the matter. Earlier this year, U.S. Soccer passed a law requiring players and staff from the U.S. and any opponents to stand during both national anthems, an apparent reaction to Rapinoe who also was on a knee during the anthem for a USWNT match last fall.

We are extremely proud of our players for their commitment to their craft and their community. We recognize and support their efforts to use their unique position to raise awareness of social issues in a positive manner.

Count Laura Harvey among the names being bantered about as a replacement for Mark Sampson as manager of England’s national team. The only coach Seattle Reign FC have ever known told Sounder At Heart that, “…if the FA picked up the phone and called me, I’d gladly have a conversation with them.”

Harvey also said she was very happy in Seattle but that coaching at the international level is the pinnacle of her profession. In five seasons in Seattle, Harvey has coached the Reign to back-to-back Shields in 2014-2015 and has more wins than any other coach. But the Reign have missed the playoffs in the three seasons in which they have not won the Shield.

Sampson was let go last week following the surfacing of additional details stemming from his time as manager at Bristol before he was hired by England. He had been embroiled in controversy surrounding his treatment of minority players in the England squad but the FA stated that those were not factors in his dismissal. 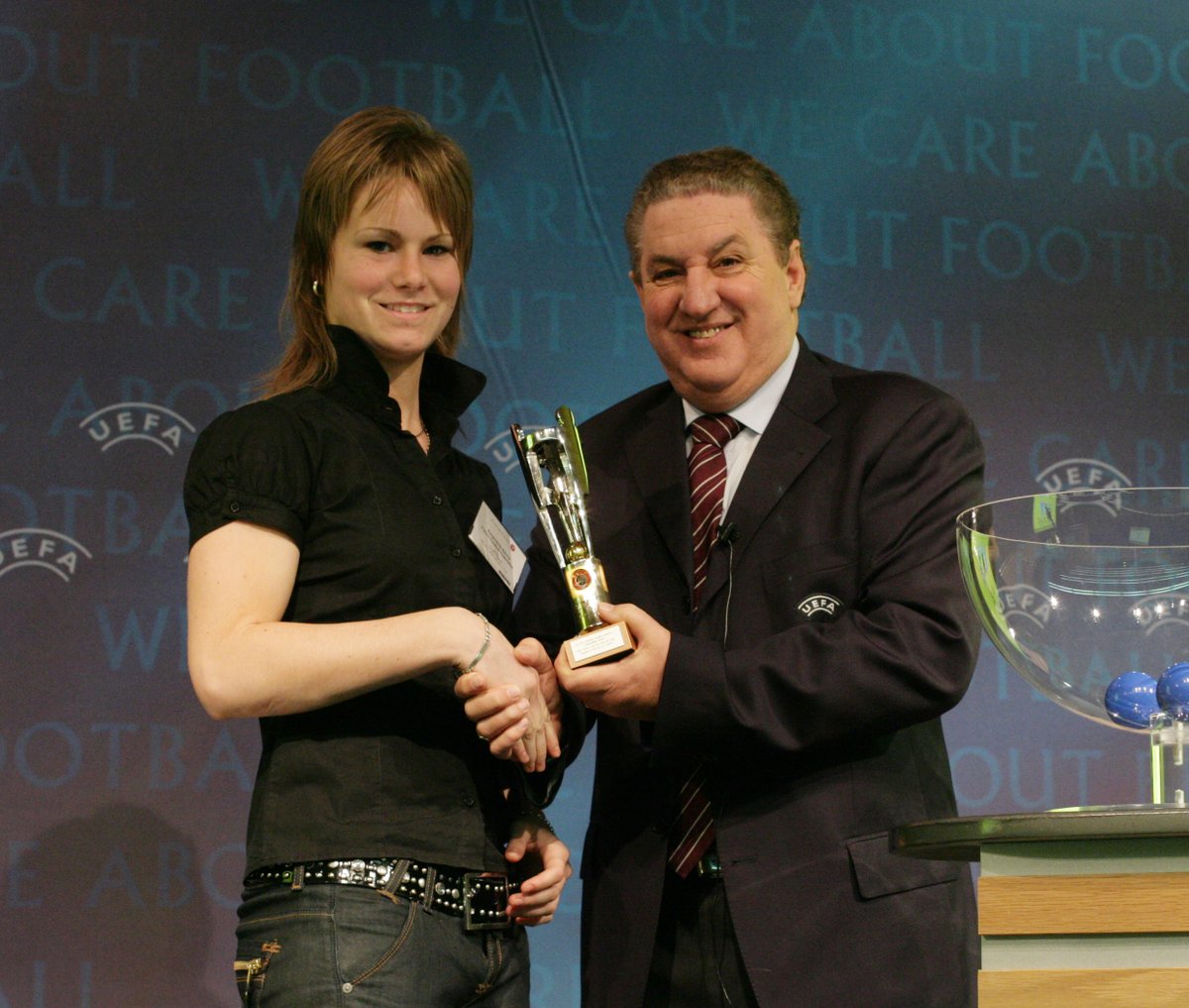 Amandine Henry accepting her Fair Play award at the U-19 Euros in 2007.

The Equalizer has independently confirmed the story originally reported by The Oregonian that Amandine Henry and Nadia Nadim are set to depart Portland Thorns FC after the 2017 season. Henry is heading back to Lyon where she spent a decade stockpiling trophies before joining the Thorns last summer. Nadim is heading to England on a big-money contract with Manchester City.

Before leaving, Henry and Nadim will attempt to go out champions. The Thorns have secured a home playoff date and will host either the Red Stars or Pride on October 7 at Providence Park. They are also still in the Shield race but need to beat the Red Stars in Saturday’s regular season finale and have the North Carolina Courage earn no more than a point from their final two matches.

A season ago, the Thorns won the Shield and were upset by the eventual champion Flash (now the Courage) in an epic semifinal at Providence Park.