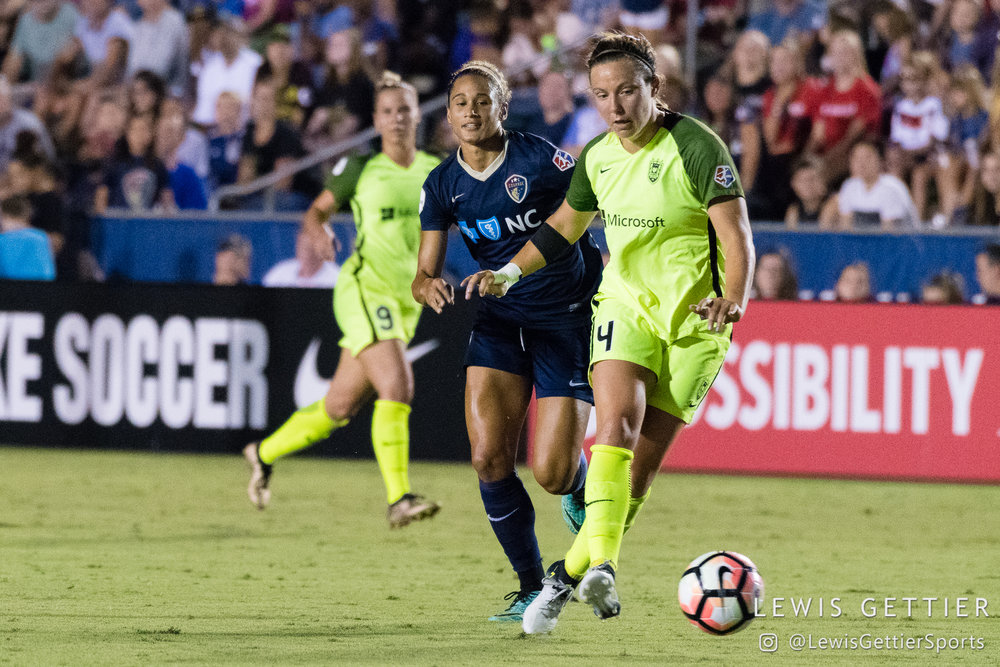 One playoff spot remains, and while Seattle can’t clinch it, they must win to keep themselves in the running (and run up the score as much as possible while doing so). What can be clinched is the Shield; for the second consecutive year at Yurcak, it’s up for grabs if the Courage take all three points.

Sam Kerr has a pretty good hold on the Golden Boot, and she could add something else to her tally with one more goal – the single season record for goals scored. Even if that wasn’t on the line, the offense is expected to run through her anyway, and with good reason. There haven’t been too many people, domestic or international, who have been able to stop her from scoring at will. What they need to focus on in order to play spoiler for the Courage is their defense, which just can’t stop bleeding goals. The Courage like to play from the flanks, so Kelley O’Hara will likely have to stay home more than she prefers and should make for a good match up against Jaelene Hinkle.

North Carolina has a knack for creating a goal out of nowhere and against the worst defense in the league, Lynn Williams ought to be able to score. What they are really up against are two things: themselves, and Kerr. Recent performances since clinching their playoff spot have been less than inspiring, leading to yet another loss against possible semifinal opponent Chicago. With a midweek game coming up and some players coming off international performances, Paul Riley could rotate his squad, which could also liven them up. In order to secure their win, Abby Dahlkemper and Abby Erceg need to take a hint from the likes of Ali Krieger and Becky Sauerbrunn, two of the few players to shut down Kerr, and mark the Australian very closely.

Who else? Kerr is nothing but pure entertainment this season, and she could almost single-handedly ruin the Courage’s plans for the night. She is aggressive, quick, dynamic, and in fine finishing form.

Any discussion of the Courage’s MVP, and possibly the league’s, must include Zerboni. She is an absolute workhorse in the midfield whose partnership with Sam Mewis bosses any opposition they encounter.

Keep an eye on:
• Set pieces

Nahomi Kawasumi could play a big role if Seattle makes it to the playoffs. (photo by Lewis Gettier)

Seattle has kept themselves in the playoff race, but they’re hanging by a thread. They have to win both remaining games, hope Orlando loses next week, and make up a goal differential of 7. The task tonight will be not only to win but also to keep the score as lopsided in their favor as possible. While Seattle is stronger at Memorial, they aren’t unbeatable, and Kansas City is in good form, if too late for their playoff chances. With Megan Rapinoe still working back to full game fitness and her touch not quite back, the Reign will look for Nahomi Kawasumi on the opposite side to unlock FCKC’s solid defense. With Kawasumi pulling the strings, she could set up opportunities for someone like the underrated Beverly Yanez. Where the Reign really need to focus is their midfield, as they’ve struggled there this season, and midfield engine Jess Fishlock is coming off international travel.

FCKC may be having struggles elsewhere, with dwindling attendance and rumors of both a departing coach and another ownership sale, but it’s not reflecting on the field. After a dismal run in July, they turned things around for an August surge. Shea Groom and Sydney Leroux have figured out how to use their speed and tenacity to get under the skin of opposing defenses and should find some success against an uncertain Seattle backline. The biggest change has been moving Christina Gibbons from outside back to center midfield, where she has become the key to the puzzle when restarting an attack, while Desiree Scott handles the defensive responsibilities in breaking up plays.

With Lauren Barnes suspended and Rebekah Stott coming off two games against the US, Williams is going to have to deal with at least somewhat of a new backline in front of her, whether that’s Kristen McNabb, Maddie Bauer, or Elli Reed.

LaBonta is one of the best success stories to come out of this season, becoming a solid starter in her second year with FCKC. She fits right in with the aggressive drive of Groom and Leroux above her.

Keep an eye on:
• Center midfield, where much of this game should play out