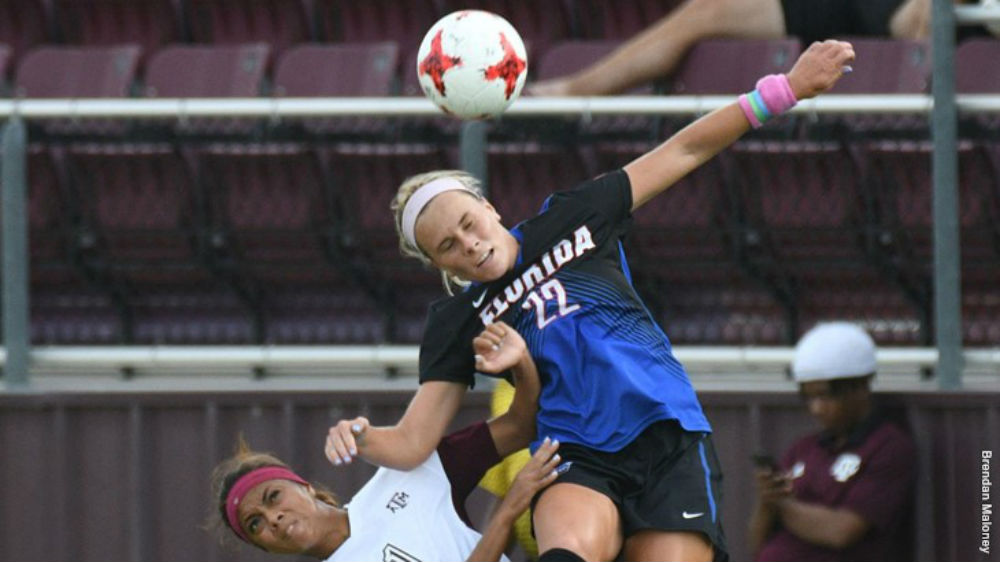 Florida midfielder Parker Roberts collides with A&M's Ally Watt as she goes up for a header. (photo by Brendan Maloney/courtesy Florida Athletics)

Just a week after being upset in their SEC opener by the unranked Auburn Tigers, Texas A&M upset No. 6 Florida (7-2-0, 1-1 SEC), 2-1, for their first win of conference play. Kendall Ritchie scored the first collegiate goal off a free kick in the 66th minute to give the Aggies the win.

The last meeting between the two teams was the 2015 SEC Championship match, which Florida won, 2-1, to prevent A&M from winning the conference title for a third straight year. The two teams are the only two to be crowned conference champs since A&M joined the SEC five years ago, and with Florida picked to win the conference in a preseason coaches’ poll, Thursday night’s match was sure to be a highly competitive match.

However, despite consistently being one of the top teams in the nation this year, even taking down then-top-ranked Stanford in Week 2, the Gators looked like a shadow of themselves Thursday night in their second match of conference play. That was likely the result of a disrupted training and match schedule resulting from Hurricane Irma and a quick road match against Iowa State on Sunday.

A&M took advantage of the Gators’ disorganization and lack of preparation by applying early pressure on Florida’s three-back. Even so, it wasn’t until the 34th minute when substitute Cienna Arrieta moved centrally from the right flank and into space, sending a shot that bounced past Florida keeper Kaylan Marckese and into the corner for the opening goal of the match.

The Gators were quick to counter, and Melanie Monteagudo nearly got on the board in the 38th minute, only to be denied by a point-blank save by Aggie goalkeeper Cosette Morché. Canadian international Deanne Rose was gifted a nearly picture-perfect look on goal moments later, but she hesitated, holding onto the ball a second too long before shooting, allowing the A&M defense to get in front of her shot to block it, preserving the Aggies’ 1-0 lead at the half.

Despite the inconsistent start from Florida, the Gators came into the second half with a new surge of energy and immediately capitalized on it. Rose finally struck for the Gators in the 47th minute after she and center back Gabby Seiler engaged in a give-and-go that saw Seiler link back up with the freshman forward inside the area. Rose just managed to get her foot on the ball before running into a traffic jam of three Aggies, including Morché, who was well off her line. The ball bounced high before rolling into the wide open goal to pull the Gators even with A&M.

Although Florida scored within the opening minutes of the second half, Texas A&M were the more dominant team for the final 45 minutes. In one of the more obvious displays of that, the Aggies forced Marckese to make three saves inside of a minute. The first of those three was a kick save to deny Emily Bates, who controlled the ball with her first touch before going one-v-one with Marckese, only to send her shot right at the keeper. Later in the half, Marckese made another big save, punching a rocket from Ally Watt, who had a number of shots for the Aggies on the night, over the crossbar.

A&M’s second goal of the night came off an error in what was otherwise an impressive display of goalkeeping from Marckese. In the 66th minute, the Aggies were awarded a free kick within scoring distance, and Kendall Ritchie stepped up to take it. Ritchie noticed that Marckese was in poor position off her line and chipped the free kick over the keeper’s head and into the back of the net. The goal was the first of Ritchie’s collegiate career and gave the Aggies’ their first SEC win.

Florida will now return home to Gainesville, where they’ll look to improve their conference record to 2-1 against Alabama on Sunday. Texas A&M will also hit the road, heading up to Columbia, Missouri to take on the Tigers of Mizzou on Sunday. The Florida-Alabama game will be televised on the SEC Network+, while Missouri-Texas A&M will be shown on ESPNU.