The biggest names in world football will descend on London for a glittering awards ceremony on October 23 that will see FIFA hand out awards for individual brilliance. Cristiano Ronaldo is a shoo-in for the men’s award after his goal-scoring exploits led Real Madrid to a Champions League and La Liga double. But the women’s award looks extremely competitive, with stars like Carli Lloyd, Dzsenifer Marozsan and Lucy Bronze all shortlisted. The women’s game is going from strength to strength and now boasts plenty of global superstars, which can only accelerate its impressive growth. But Lloyd is 35 now and Brazilian dynamo Marta is 31, so it is time for a new crop to emerge and take the game to new heights. Here we run through five of the top young prospects:

The Californian is just 18 years of age but has already racked up all manner of impressive accolades. She was named US Young Female Player of the Year for 2016 after a breakout season for the national team. She captained the USA team at the Under-17 World Cup and won the Golden Ball as the best player at the CONCACAF Under-17 Women’s Championships. The UCLA starlet can play as an attacking midfielder and auxiliary forward and has already trained with the US first team. She is on an upward curve and is tipped as a future star for club and country.

Mead banged in a remarkable 77 goals in 78 games for Sunderland and earned a move to Arsenal in January 2017 on the back of her exploits in front of goal. In her first Super League match for Sunderland she bagged the winner against champions Liverpool, and also netted a hat-trick against Chelsea. The 22-year-old has also broken into the national team set up and represented England at various youth levels, with a spectacular long-range strike in the 2014 FIFA U20 Women’s World Cup making her a YouTube sensation. 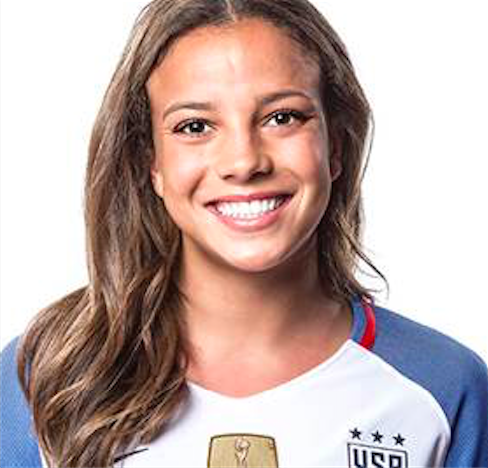 Pugh is just 19 but has already established herself as one of the most exciting attacking talents in the US. She turned her back on a college career at UCLA to go straight into a pro career with Washington Spirit, but her greatest achievements have been with the national team. She started 12 games for the U.S. senior team in 2016, scoring four times and grabbing seven assists, and became the youngest player in US history to score in the Olympics when she netted against Colombia. Pugh has formed a devastating attacking quartet with Lloyd, Crystal Dunn and Tobin Heath, and the U.S. is in lethal form right now. You can find football betting markets here and women’s football often crops up among leading bookmakers nowadays. The U.S. is the 5/2 favorite to win the 2019 World Cup and Pugh will be central to its chances.

Nigeria’s 22-year-old forward is certainly the next big thing in women’s soccer and has already gained plenty of experience. She broke through in the 2014 Under-20 World Cup, where she was named the best player in a tournament Nigeria won. It earned her a move to Liverpool, where manager Matt beard called her “one of the best young players in the world”. She won the BBC Woman’s Footballer of the Year Award in 2015, beating the likes of Marta and Nadine Kessler to the title, and then moved to Arsenal. She excelled for the Gunners as they won the FA Cup in 2016, and then decided – like many of the world’s top stars – to move to China, where she joined Dalian Quanjian. She broke into Nigeria’s senior team in 2015 and has become their leading light.

At the age of 17, Meidema made her debut for the Dutch national team when she came on as a 75th minute substitute. In just 15 minutes on the pitch, she scored a hat-trick. Miedema is a phenomenal talent and has the potential to become the best player of all time. She is now 21 and a star for both the Netherlands and Arsenal. Her career started at Heerenveen, where she won the Golden Boot in the 2013-14 season as a teenager. She moved to Bayern Munich and featured in an Invincibles team that ended the season unbeaten, winning their first league title since 1976. She was prolific in Germany and earned a move to the Gunners, and is on the 10-woman shortlist for the FIFA awards in October, the youngest player on the list. She has already earned 57 caps for the Netherlands and scored 45 goals. Miedema is the future of women’s soccer and she will only get better over the next decade.

Martin Green is an experienced sports writer and has covered world football for many years.