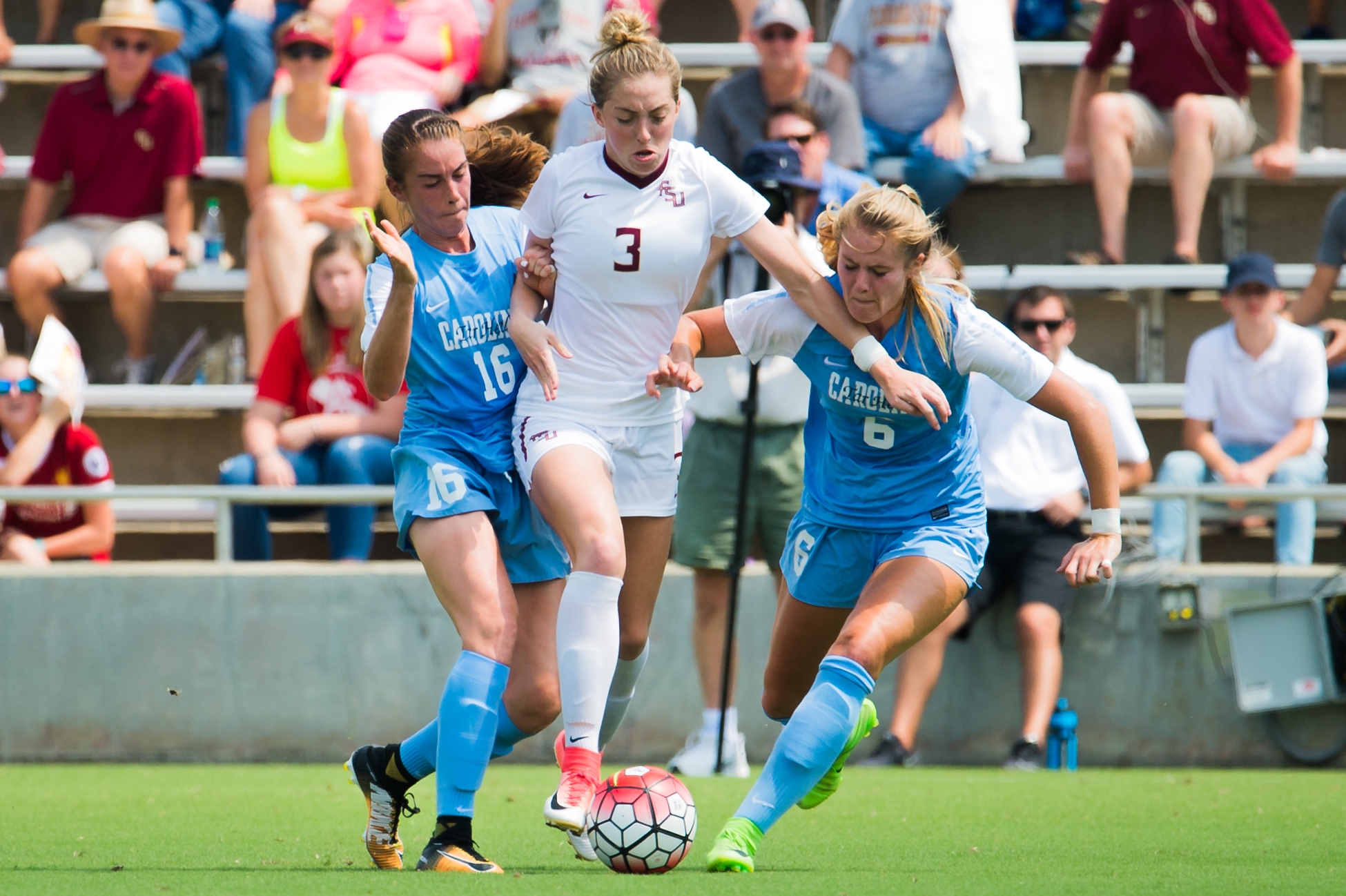 The No. 10 North Carolina Tar Heels only put one goal away, but it was enough to open conference play with a 1-0 win on the road against the reigning ACC champions, No. 16 Florida State. In the process, Anson Dorrance’s Tar Heels snapped a Seminole 36-game home undefeated streak that dated back to September 2014.

The UNC win came off a Dorian Bailey header in the 58th minute, scoring on a play that originated on a Tar Heel corner kick. Joanna Boyles, excelling in her first season back from consecutive ACL tears, took the corner, sending it into traffic in front of the goal. Abby Elinsky got her head on Boyles’ service, heading the ball down and off the pitch. Elinsky’s header bounced high enough for Bailey to get under, sending a lofted header over Florida State keeper Cassie Miller’s reach and into the back of the net.

As a 1-0 scoreline often indicates, the game was very much a defensive battle between the two sides, but the game also got off to a sluggish start. Neither offense was able to do much in the opening half, taking a combined six shots in the opening half (4-2, FSU). Both teams put a pair of shots on goal in the first 45 minutes, but neither goalkeeper was especially tested and the game remained scoreless at the half.

Although the second half wasn’t as attack-heavy as most UNC and FSU games go, both teams’ attacks had clearly woken up at halftime. Florida State junior midfielder Dallas Dorosy hit the ground running with an impressive move on goal in the opening minutes of the second half, but a strong defensive effort by Maya Worth slowed her down, allowing goalkeeper Samantha Leshnak to jump on the ball to prevent Dorosy from getting off a shot. That play was following minutes later with a hard shot from close range by Bridgette Andrzejewski, but Miller made a point-blank save to prevent the Tar Heels from scoring.

The next few minutes saw the two teams’ exchange a pair of free kicks in nearly identical spots relative to goal. Florida State was awarded the first, but Venezuelan-international Deyna Castellanos, the youngest player to be nominated for the Best FIFA Women’s Player of 2017 and current ACC leader in both goals (8) and points (17), sent the free kick over the crossbar. UNC was then awarded theirs on the following possession, but Boyles’ kick sailed right into the hands of the Seminole keeper.

Florida State’s best attempt of the second half came in the 78th minute after Gabby Carle gained possession and drove the ball out of the backfield and towards goal with an impressive breakaway. As she ran into traffic, Carle maneuvered the ball around and waited for a play to develop, eventually splitting a pair of defenders with a through ball for Castellano, who had made an overlapping run down the near flank. Castellanos took a couple of touches before firing off a shot, but UNC netminder Samantha Leshnak tipped the dangerous shot over the crossbar.

At the final whistle, the Tar Heels had outshot the Seminoles 12-8, putting seven of those on frame. Although Miller did well to make six big saves to prevent a bigger win for the visitors, Leshnak also had a solid day in goal, finishing the day with four saves and a clean sheet.

For Week 6 of NCAA action, North Carolina will return home to Cary, where they will continue ACC action against Clemson on Thursday, September 21. Florida State hits the road headed for Louisville, where they will take on the Cardinals, also on Thursday.