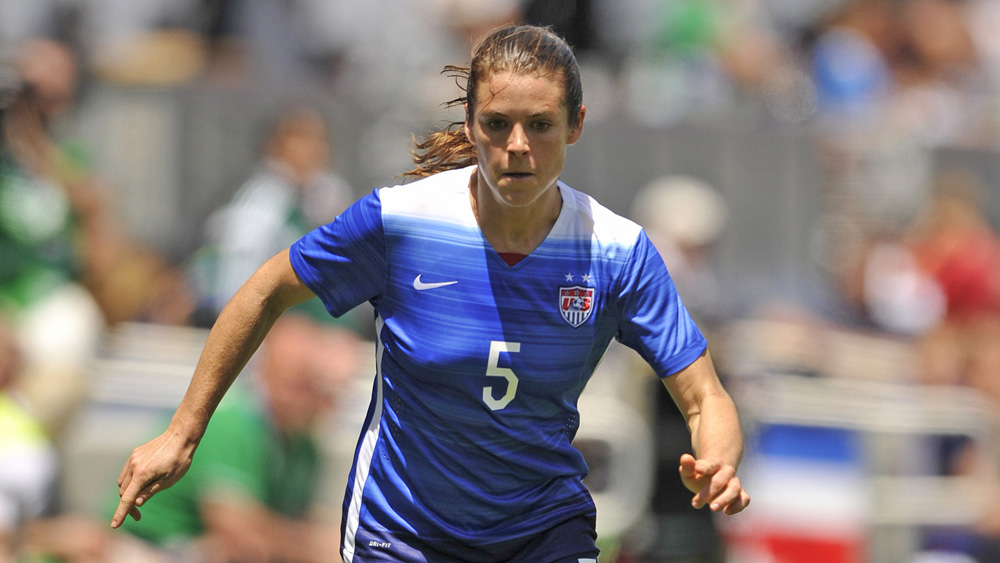 Kelley O’Hara during one of her now 100 caps for the USWNT. (Photo Copyright Patricia Giobetti for The Equalizer)

In the first USWNT match since coach Jill Ellis called time on her post-Olympic period of experimentation, things went fairly well in a 3-1 victory over New Zealand. Kelley O’Hara wore the armband on the occasion of her 100th cap, Julie Ertz scored twice, and the result was never in peril. Better yet, the U.S. was on the front foot for large portions of the evening. Here are four quick takeaways.

Kelley O’Hara’s 100th cap was much like her prior 99—a solid, workmanlike performance. Unfortunately, the most notable moment was her last when she walked off gingerly after taking a wicked-looking shot to the head and neck area on the play where New Zealand scored.

As is often the case, the milestone offered an opportunity to look back. O’Hara’s first cap came in 2010 a few months after she won the Hermann Trophy and was drafted No. 3 overall by FC Gold Pride in WPS. O’Hara was an attacking player then, and when she made her World Cup debut in 2011 as a late replacement for Lindsay Tarpley, her lone appearance came as a midfielder. A year later it was Ali Krieger who went down injured, and so began O’Hara’s life as an outside back.

The ensuing years have been fraught with debate over where O’Hara best fits on the pitch. Through it all she has calmly gone about her business for both club and country spending most, but not all, of her time at either of the outside back spots. Among the notable times she played elsewhere was during her second World Cup. After being the co-subject of the Twitter hashtag #freetheirish when neither she nor Heather O’Reilly saw much of the field early in the tournament, she came off the bench and scored an 84th minute goal to ice the semifinal win over Germany in 2015.f

Another stretch when O’Hara was not at outside back came in the months that followed reconstructive ankle surgery in fall 2013. So steady did she return that the injury is rarely mentioned in discussion about her career. But taking ACL injuries out of the equation, O’Hara’s much more serious ankle rebuild ranks with Hope Solo’s shoulder as two of the most devastating injuries overcome by a player who returned to the elite level.

There is no telling how many more caps are left in O’Hara’s tank, but she won’t turn 31 until the end of the next World Cup and her solid, versatile play figures to keep her in the mix at least that long.

It’s easy to pick out the player who scored two of the three goals and single her out. But on this evening Ertz was so much more than a simple brace. Playing in the midfield where she has spent almost all of the NWSL season with the Red Stars, Ertz was quite simply a dominant force on both sides of the ball. Her ball-winning abilities have been well known since the ’15 World Cup, but if Friday is a guide, Ertz is also capable of helping to pull the strings going forward.

Normally it is club coaches that seem to react to the national team coach. When Jill Ellis was playing 3-5-2, many NWSL clubs experimented with something similar. Since it became apparent that Ellis bagged that formation, it has been absent in the pro league save for late-match, push-for-goal scenarios. In Ertz’s case, the Red Stars have put her in various midfield roles this season, dropping her back to central defense only as an injury band-aid. Whether the decision to put Ertz in the midfield was a direct reaction to her success with the Red Stars is not clear, but it’s a trend worth keeping up.

By the way, using Ertz in midfield seems to fly in the face of the notion that the experimenting is over. Maybe when you’re experiment is the best player on the pitch, less people will care.

New players debut for national teams all the time, so that in and of itself is not such a big deal. But the road for Sofia Huerta has been different from most. A Mexican-American, Huerta had eligibility to play for both countries, and so she did for both before playing for Mexico in U-20 tournaments and senior team friendlies. But when it came time to commit to a tournament for Mexico, Huerta declined, instead electing to set her sights on playing for the United States.

Ellis brought Huerta in to train with the team during Tournament of Nations, but her U-20 World Cup appearance with Mexico required that she have a change of national association approved by FIFA (note: the original version of this story stated that Huerta required a chance of association due to her senior friendly appearances.Those few dodgy moments

It was mostly good, right? But just before New Zealand scored to make it 2-1, the U.S. had lost the initiative on the match. And so it did not come as a great surprise when their opponents got on the board. Credit Ali Riley for a tremendous, pressure-breaking cross, but the scene in the U.S. defensive box is one that has been a bit too familiar of late.

Riley’s cross bounced once before Hannah Wilkinson slipped between O’Hara and Becky Sauerbrunn to get just enough on it to knock it in. Where was the keeper? Alyssa Naeher was smashing into O’Hara after a split second of indecisiveness caused her to get a late start off her line. Staying put may have worked also since Wilkinson was unable to get much on the header. Maybe Naeher only came out when she saw O’Hara and Sauerbrunn were about to get beat. But Naeher’s form and decision making has been under fire since the Brazil debacle (turned dramatic win) at Tournament of Nations. The Wilkinson goal won’t do much to quell those fears.

The same play nearly created another goal in stoppage time. Again Riley sent a sensational cross and again Wilkinson split Sauerbrunn and the left back—Casey Short was in for O’Hara—and somehow got a header on goal. This time Naeher stayed home, slid to her left, and made the save. For decades the USWNT has ruthlessly punished teams for small defensive mistakes. Becoming the team on the other end of those mistakes is a trend the team does not want to see gain any more steam.

The sides are back at it again Tuesday night in Cincinnati.