Sofia Huerta is immediately eligible to play for the USWNT following a granted change of association by FIFA.
(photo copyright Lewis Gettier)

U.S. Soccer announced today that the Chicago Red Stars’ Sofia Huerta had been granted a one-time change of association by FIFA. The midfielder, who was first called up to train with the USWNT during the Tournament of Nations, is already in camp training with the team ahead of a pair of friendlies against New Zealand. With the approved change of association, Huerta will be eligible to play in those friendlies, the first of which takes place tomorrow night.

Huerta, a Boise, Idaho native whose father hails from Mexico, previously played for her father’s home country, earning 8 caps with the youth national teams and 5 with the senior team. In one such cap earned on September 2013, Huerta was a second-half sub during a 7-0 loss to none other than the USWNT. Because of her appearances for Mexico, a change of association was required before she could play for the USWNT.

In the above Lifetime feature on Huerta, which aired during last weekend’s Game of the Week, the Mexican-American midfielder said that, after failing to make the 2012 US U-20 World Cup roster, she thought her chances of playing internationally for her home country were over. Mexico extended an invitation for her to compete on their U-20 squad, and she accepted. However, playing for the USWNT has always been her dream, and now with the change of association, it is finally possible.

“I want to thank U.S. Soccer for the opportunity, and I sincerely appreciate the work that went into getting this change done,” Huerta said in U.S. Soccer’s press release. “Now it’s about working to continue to improve and trying to earn my chance to get on the field.”

If Huerta is capped with the USWNT, she’ll become just the second Mexican-American to do so. Stephanie (Lopez) Cox was the first back in 2006. 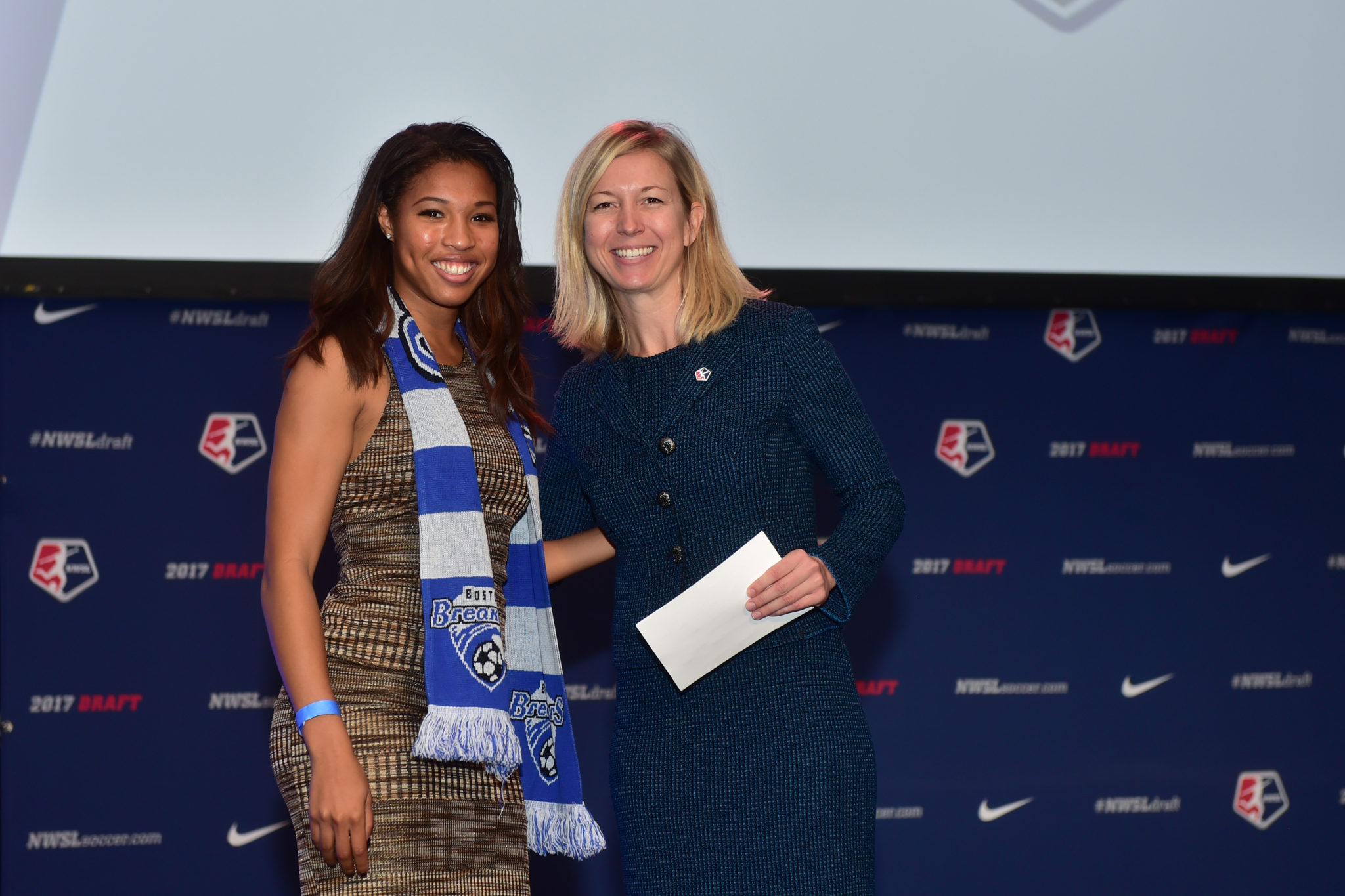 Amanda Duffy, managing director of operations for the NWSL, spoke today at a panel discussion at the SportsBusiness Journal’s Game Changers conference. She, along with Portland Thorns FC President Mike Golub, addressed some lingering concerns surrounding the league in its fifth season as reported by SBJ’s Ian Thomas in a series of tweets.

The biggest concern addressed was that of marketing the league. Duffy said that the NWSL is still trying to find the balance between marketing towards the “soccer moms” and millennials and that the discussion of how to do that is on a market-to-market basis right now. She pointed out that MLS made the switch to heavily targeting the millennial and young professional demographics faster than the NWSL has, although the league’s 2016/2017 viewership has skewed older than in previous seasons.

Part of the reason for the older viewership audience may be the league’s broadcast deal with A+E Networks. With the NWSL Game of the Week airing on Lifetime instead of ESPN2 or FS1 as in past seasons, more games than ever have been televised this season, although to a much different demographic. One of the best additions to come out of the Lifetime Games of the Week is the halftime features on individual players competing in that day’s match, and Duffy said one of the best ways to continue marketing the league is by telling the stories of the players in the league.

According to Duffy, the broadcast deal with A+E, along with new ownership entering the league, is why 2017 was very much a transition year for the NWSL. As a result, she said the league has some quick work to do to get where it needs to be in the next 1-2 years. One of the areas in need of growth is player salaries, although she maintained that the league had to be careful not to repeat the mistakes of the previous two leagues in regards to cost certainty.

As for Golub, he provided information regarding Portland’s season ticket holders and marketing strategies. He said that when the NWSL was formed, 20 percent of Portland Timbers season ticket holders also bought season tickets for the Thorns, but that number has since increased to 30 percent over the past five seasons. Golub also claimed that 50 percent of Thorns fans are men because the Timbers and Thorns organization do not market either team to a specific gender, but simply to soccer fans in general. Duffy praised both Portland and Orlando’s organizations for the amount of emphasis placed in marketing their NWSL sides. While Duffy said that would not have been possible in past years, Golub said he thinks the 2019 World Cup will see other clubs invest as much in marketing as Portland has.

FIFA announced today that the next Women’s World Cup will be held from June 7 through July 7, 2019. The tournament will kick off with France taking the field at Parc Olympique Lyonnais in Lyon on June 7, and it will conclude in the same venue exactly one month later. Besides Lyon, other French cities that will play host to World Cup matches are Paris, Nice, Montpellier, Rennes, Le Havre, Valenciennes, Reims, and Grenoble.

Although the USWNT are the reigning World Champions, the only automatic qualifiers are the tournament hosts, in this case France. The US will not play any World Cup qualifiers until next year, a process that culminates with the CONCACAF Women’s Championship. If the US finish in the top three of that tournament, they will qualify for the World Cup.

Also announced today were the 2018 U-20 World Cup dates, which will also be held in France. That tournament will run from August 5-24 of next year. 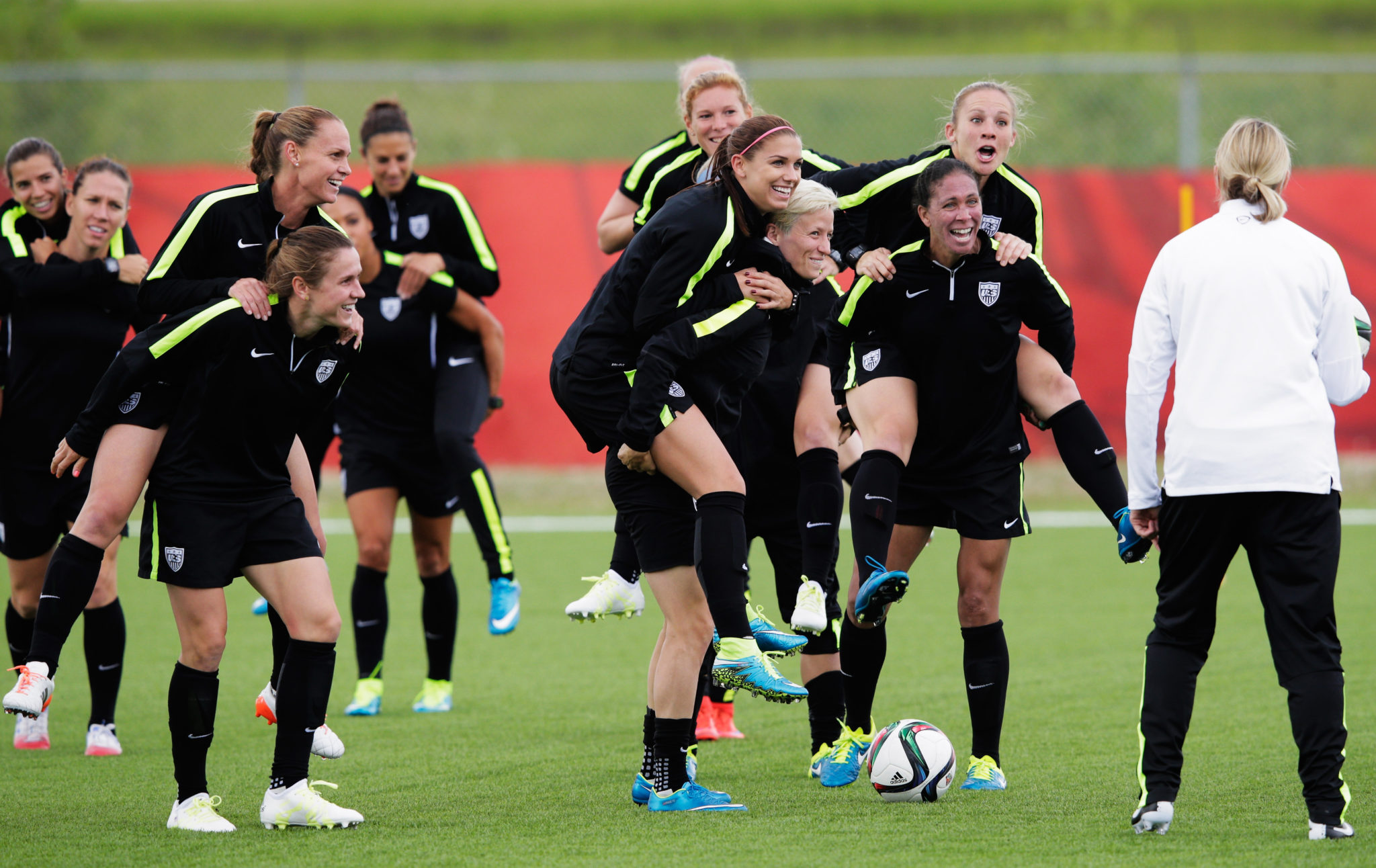 Alex Morgan and Megan Rapinoe, center, have both joined Common Goal, promising to donate 1 percent of their salaries to charity. (Getty Images)

The Associated Press reported today that the USWNT’s Alex Morgan and Megan Rapinoe have recently joined Common Goal, a movement created by Manchester United’s Juan Mata Garcia in which players pledge to donate one percent of their salaries to soccer charities.

Bayern Munich defenders Mat Hummels has also joined the campaign, but Morgan and Rapinoe are the first women to join, more noteworthy to some considering the large pay gap between men’s and women’s professional athletes.

“As the global profile of women’s football continues to grow, players like myself and Megan will have an increasing number of opportunities to use our status for good,” Morgan said in a statement earlier today. “I’m thrilled to join Common Goal at this early stage and hope we can inspire many others to become part of the movement.”

The money donated through Common Goal is going to worldstreetfootball, a Berlin-based charitable organization that, according to its website, aims to change the world through the sport of soccer.

The United States’ U-19 women’s national team defeated Iran’s U-20 team, 5-0, on Thursday to win the CFA International Women’s Youth Football Tournament. The US went undefeated in the tournament and only conceded one goal after previously beating the U-20 teams of Japan (1-0) and China (2-1) earlier in tournament play.

The U-19s’ win today was courtesy of five different goal scorers: Shae Holmes, Alexa Spaanstra, Cori Dyke, Brianna Pinto and Jordan Canniff. Today’s goals were the second tournament goals for both Pinto and Spaanstra. Pinto scored the game winner in the opening match against Japan, while Spaanstra’s 90th-minute goal prevented China from stealing a point from the Americans. Jenna Nighswonger scored the other tournament goal for the US.

Claudia Dickey played 180 minutes in net for the US, earning the clean sheet against Japan. She made 11 saves across two games, conceding only one goal. Meagan McClelland started in goal for the US and earned a clean sheet of her own.

The Lowdown: This and That from Week 20
Thursday Q&A: Chicago Red Stars midfielder Danielle Colaprico