The Lowdown: This and That from Week 20 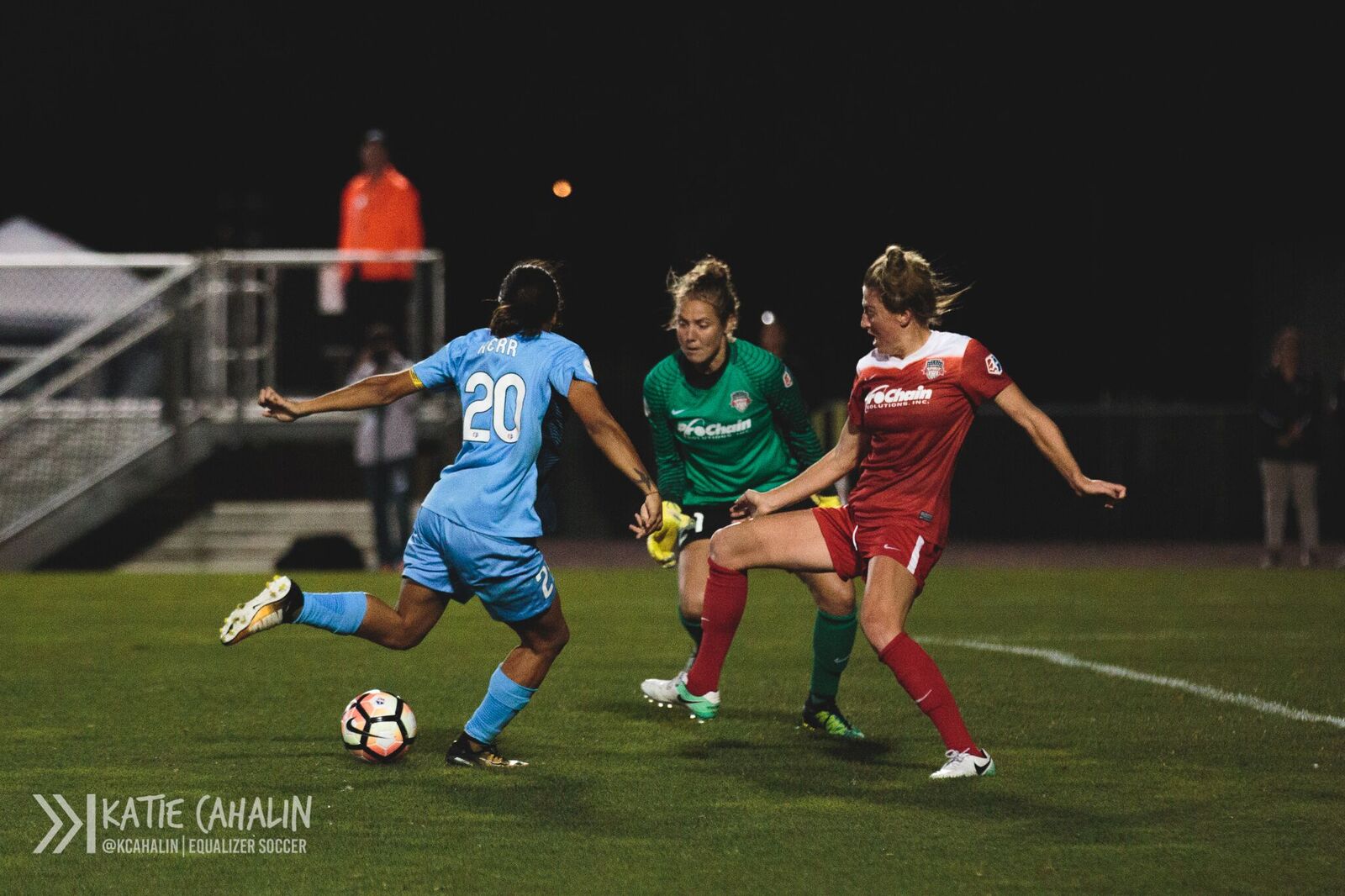 Didi Haracic, in green, defends against Sam Kerr with help from teammate (photo copyright Katie Cahalin for The Equalizer)

The final FIFA interruption of the NWSL season is upon us after which there will be two weeks to play. We already know there will be semifinals in North Carolina and Portland and that those two are still vying for the Shield. The Red Stars and Pride are in prime positions to be their respective guests, but the Reign are lingering and could poufnce on one of those spots if the other two slip up down the stretch.

The other five teams are already eliminated and in a few cases the trends are troubling. The Breakers have not only never made the playoffs in NWSL but could well be headed to their third consecutive last-place finish. The Dash are also void a playoff appearance though in one less season than the Breakers, but in the last two weeks traded Morgan Brian and infuriated the fan base by rescheduling a game five hours away. Sky Blue are out for the fourth straight season and had upheaval at the coaching position which was followed by the abrupt departure of their captain Christie Pearce.

Here are three takeaways from Week 20 and the general state of NWSL and its clubs:

The road to Orlando runs through PDX, North Carolina

The Courage and Thorns wrapped up home playoff dates over the weekend, and will now battle it out—or not—for the Shield. The Courage lead is two points but they have a game in hand which will be Wednesday night, September 27 when they head to Edinburg, Texas for a makeup game with the Dash.

The Courage also play Sunday the 24th and Saturday the 30th which means three matches in seven days in three cities. The Thorns meanwhile visit a Pride team still needing a point to get in the playoffs and then host a Red Stars team that may or may not still need a result to get in.

The unintended consequence of the pre-determined NWSL Championship site is that it has dis-incentivized winning the Shield. With no Champions League or other nugget on offer, the difference between first and second is, in reality, little more than bragging rights. Depending on semifinal matchups it can actually behoove a team to finish second instead of first. Add in that Shield winners are 0-for-4 at making it a double and the inevitable superstitious types start to become skittish at the thought of bucking the trend.

It would be nice if the Courage and Thorns went all out to win it, but the reality is that they may just be satisfied with the semifinal at home and the proverbial rest between now and then.

That leads us to the other two spots. The Pride had one spot locked up on Alex Morgan’s stoppage time goal last Thursday only to give up an equalizer about a minute later to keep things in doubt. On Saturday the Red Stars played one of the dullest games ever in NWSL that suitably ended 0-0. So both teams still need points while the Reign have a lifeline.

For the Pride, if we assume the Shield contenders are serious about it, they face the irony of having a loss in their next match potentially making their final game more difficult. That is, if they lose to the Thorns on September 23 it will keep them in the Shield race possibly down to the final weekend which could make the September 30 trip to North Carolina more difficult of the Courage need the match. The Pride are likely to make the playoffs if they earn one more point (more of tiebreakers below) and assured of doing so with two.

The Red Stars are done at home for the season. They return from the break with a trip to Houston and then head to Portland. If they are to win the NWSL Championship it will be with five consecutive away matches to end the season including four in four weeks. Like the Pride, two points assures them a spot in the dance. 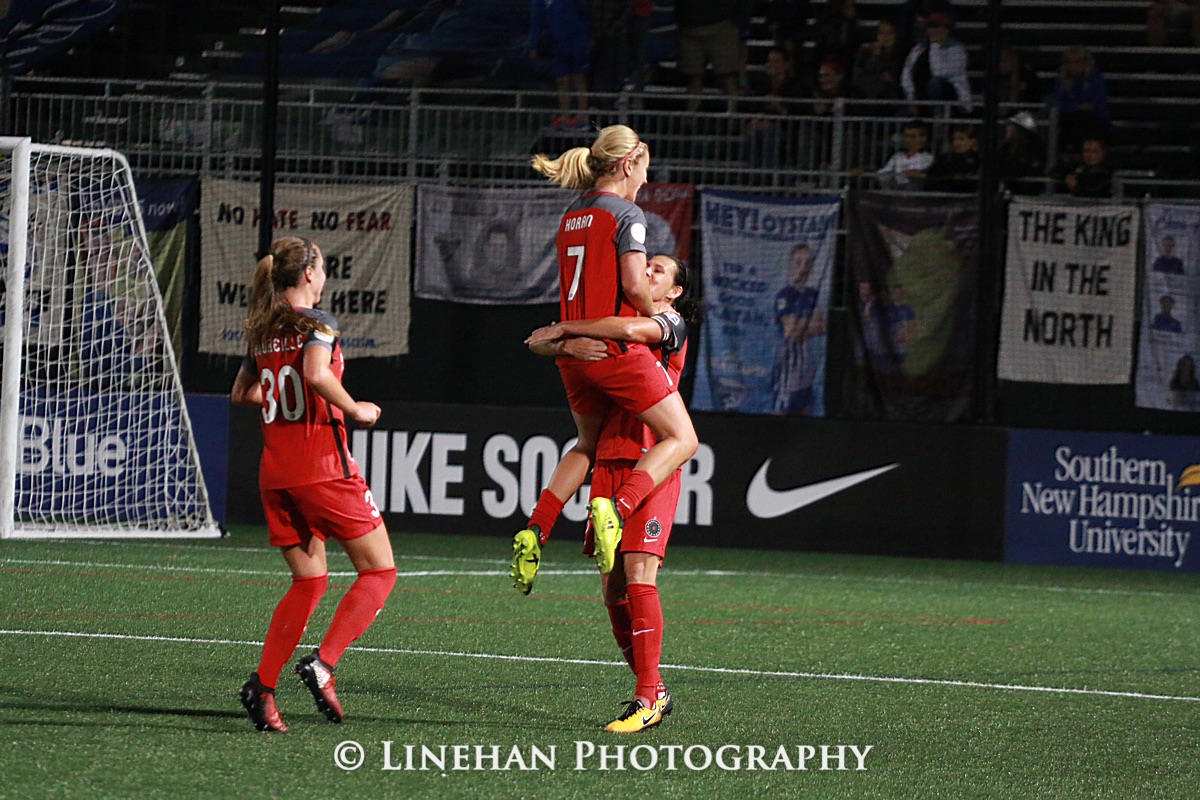 The team hoping to take advantage is the Reign. They have had a wild ride this season particularly since July 22 when they blew a 4-0 lead to Sky Blue only to win 5-4 on a goal in the 87th minute. Since then they have – defeated the Red Stars by scoring not one but two goals after the clock struck 90; lost to Sky Blue despite leading 3-0 at halftime and 4-3 at the 90 minute mark; and drawn the Pride after falling behind in stoppage time.

It adds up to a five point deficit with two matches to play. Those matches are hone to Kansas City and away to Washington. Simply put they need to win both matches and hope for the right results elsewhere. If they do anything but win, the Pride and Red Stars are in and everything above is mostly irrelevant. But if they win twice…

In a three-way tie, the Reign and Red Stars would advance.

It looks like DiDi Haracic will be the Spirit goalkeeper for the remainder of the season. Stephanie Labbe’s season is over through a medical leave of absence and Kelsey Wys has been backing up after returning from ACL surgery but is still not 100 percent.

Saturday night, Haracic had the game of her life, holding an opponent to a single goal for the first time in NWSL and earning her first professional win. It was hardly straightforward. She had to make several saves and runs off her line to prevent Sky Blue’s Sam Kerr from adding to her league-leading goal total. And there was the stoppage time sequence that saw her make not one play to thwart Kelley O’Hara and then another to make a save on Daphne Corboz.

“I kept a very high line,” Haracic said. “I know they like to play sometimes over the top and when you have a few players, including Maya Hayes, with speed up top, you kind of need to keep a high line (and) be the stopper/sweeper sometimes.”

Haracic was fantastic on the night but with a quarter hour to play it looked like her work would be for naught. The Spirit trailed 1-0 on a goal scored after Haracic took a boot to an unfortunate area and could not immediately get to her feet. But Whitney Church—who made a tremendous block during the stoppage time sequence—equalized and Mallory Pugh scored the game winner.

“It only took four years,” she said with a chuckle of her first NWSL win.

Some fans may not realize that Haracic made a cameo for the Western New York Flash in 2014. That team lost starter Adrianna Franch to an ACL tear on the first day of preseason, then lost replacement signing Lydia Williams to the same injury midway through the season. Wys, then a rookie, was next in line but with the playoffs out of reach, Aaran Lines handed the start in the seaso finale to Haracic. It was an odd match. Haracic faced three penalties, stopping one, but conceding the other two including one in stoppage to time to hand the Red Stars a 3-3 draw.

The years that followed found Haracic mostly training as a reserve player waiting her turn. That included dressing as Wys’s backup last season while Labbe was away at the Olympics.

“Mentally it’s been tough. It’s a grind,” she said. “So when people ask me this question—you got to stick with it. I wake up every morning loving what I do. So if that’s my role, then I’m content with it.”

Just don’t expect the 25-year old Haracic, who grew up a stone’s throw from the Maryland SoccerPlex, to stop now that she has that first win.

“Absolutely,” she said about continuing to play. “I’m not quitting. I’m not stopping. I have a lot of legs in me.”

Tales of woe for those already eliminated

Five of the 10 NWSL teams have been eliminated from playoff contention. Here is a very quick look at where all five stand:

The Breakers brought in new seats at Jordan Field but they have rarely been called into service. Is the losing starting to get to the usually loyal fan base? This will be five-for-five not making the playoffs. Add in the three other leagues and the Breakers have played a dozen seasons with four playoff appearances from which they have never advanced. They are now guaranteed to finish with fewer wins and points in two seasons under Matt Beard than they did in the same number of games under Tom Durkin. If they win their last two—they have won once since April—it will mark their first five-win season since 2014. Some good young pieces but things need to change.

The Spirit may have more than half of their points against Sky Blue but they also have a host of young players who could serve as a quality core going forward. They probably need another impact player or two—they hold two 1st round picks—and need to figure out how to keep their players on the field and off the injury report. That goes double for their international players. Francisca Ordega and Estafania Banini are both outstanding players but both are injury prone and burn international roster spots. Considering where this team was on and off the field 10 months ago they have done a pretty good job with damage control.

The Dash are a veritable mess and the recent announcement to move the club’s final home match five hours away to Edinburg has sent a good bulk of the fan base into open revolution. There will be a new coach for 2018 and presumably an entirely new direction. Whoever it is will likely build around Kealia Ohai and Jane Campbell. Beyond that it’s anyone’s best guess and there won’t be much else left from the Randy Waldrum era to hang their hats on.

FC Kansas City have now missed out two seasons in a row, an understandable dropoff considering the players that left after the second championship in 2015. This season has seen the rise of several formerly unknown players and if not for an inexplicable run of conceding goals at a breakneck pace, the Blues might still have playoff life. If what is left of the core returns including Amy Rodriguez there may be one more run let before a complete rebuild is required. Investment in the international market would not be a bad thing either, but recent attendance figures don’t offer much encouragement on that front.

Sky Blue FC were humming along in the second year of the Holly rebuild when all of a sudden the bottom fell out. First came a string of utterly awful defensive performances. Then Holly stepped down and Christie Pearce left signaling upheaval for a side that has not reached the playoffs since 2013. Sam Kerr is a keeper up top and Kailen Sheridan has a bright future in goal. In between are a lot of players with promise but also a lot of questions. A new coach will be tasked with figuring it out. On a bright note, attendance figures are up considerably.