Week five of the college season marks the beginning of conference play for some teams, while others round out their nonconference slate. On tap for the week are some intriguing conference match ups as well as a storied rivalry match that took on added significance after last season. Here’s a look at a few of the matches to watch this week.

No. 16 Florida State Seminoles vs No. 7 North Carolina Tar Heels 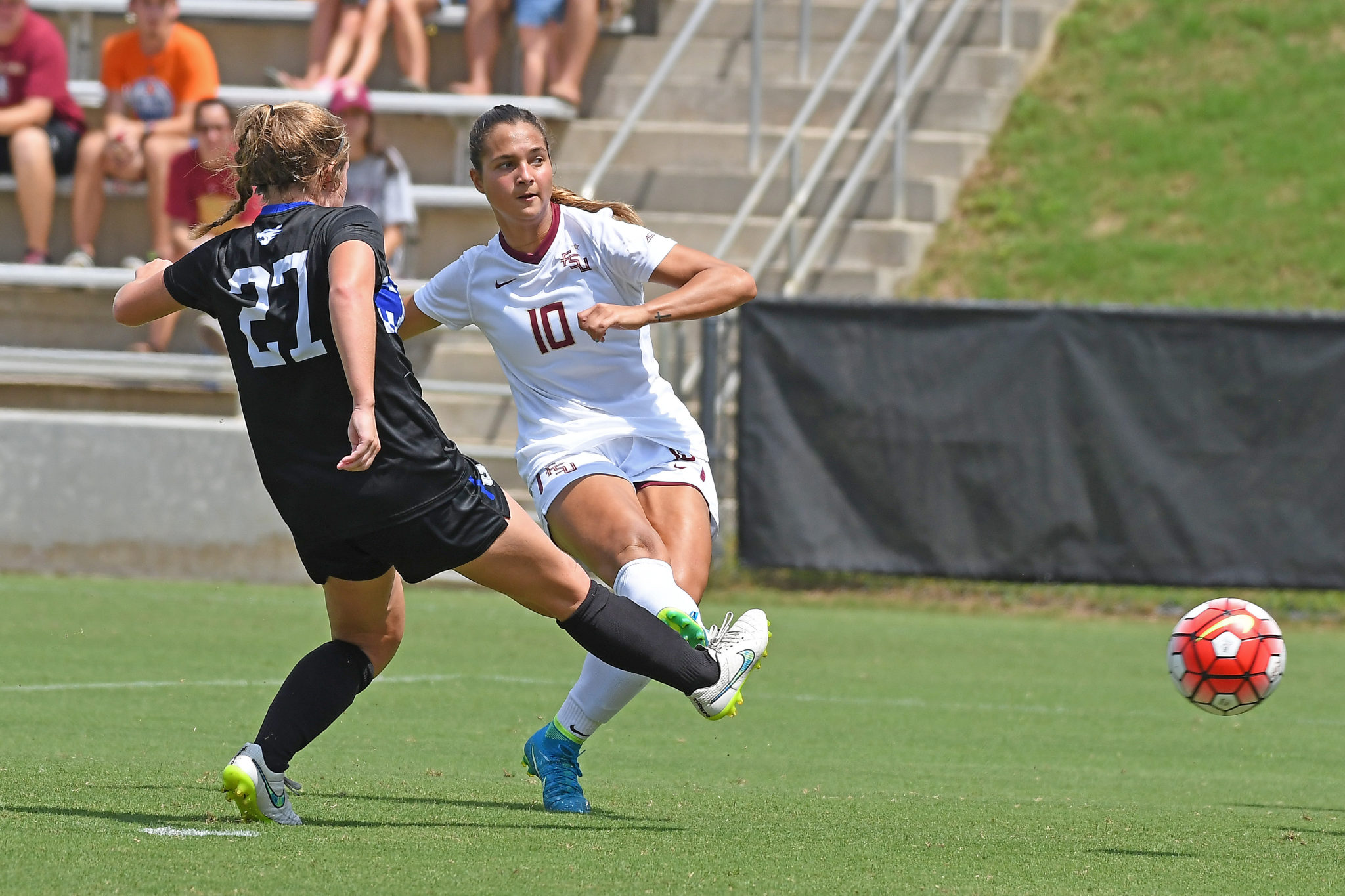 Deyna Castellanos is coming off a five-point performance against Troy. (photo by Phil Kelly, courtesy of FSU Ahtletics)

By far the best matchup of the first weekend of conference play in the ACC, Florida State and North Carolina should be an interesting match. North Carolina comes into the game after an up-and-down first month of the season. The record includes wins against Duke and Auburn, but also losses against UCF and Penn State. Meanwhile, the Seminoles come in at 5-1 having dropped a 1-0 contest at former Florida State assistant Wes Hart’s Alabama.

For the Seminoles, Deyna Castellanos is the key. The Venezuelan’s technical brilliance and flare are often too much for opponents to handle.  Her eight goals are tied for third most in Division I so far this season. She’ll especially test the famous Tar Heel three back defense if English international Lotte Wubben-Moy is out again with an apparent knee injury.

Offensively, eight different Tar Heels have found the back of the net. Joanna Boyles and Taylor Ott lead the way with three goals apiece. Interestingly, Madison Schultz, who in a super sub role last year was incredibly key to North Carolina’s College Cup run, has not scored yet this season. The beginning of conference play would be an apt time for her to find her scoring groove again.

How to Watch: SEC Network/ WatchESPN

The Rebels’ Channing Foster and CeDe Kizer have combined to score a total of 17 goals on the young season. Yeah, that’s not a typo. The pair’s combined total eclipses the majority of teams in Division 1. In truth Ole Miss put up some crooked numbers against some lower competition. Thursday night, the Rebels will have a chance to show that their 4.75 goals per game during non-conference play wasn’t a fluke.

For the Gators, the match is the team’s first since Labor Day weekend as Hurricane Irma caused both of last week’s games to be canceled. It’s hard to predict how the team will react to the long gap between matches, especially given the emotional and physical hardships the disaster has caused millions in the Sunshine State. Look for coach Becky Burleigh to possibly insert Gabby Seiler, who operates essentially as the Gators’ Jill of All Trades, in the back to deal with the Rebels’ high octane attack.

How to Watch: TheW.tv

Okay,  Santa Clara is currently below .500, so it’s natural to wonder why this would be a previewed game. Simple. Not only is this Bay Area rivalry one of the biggest in women’s soccer, but the Broncos knocking off the Cardinal in the NCAA tournament last year certainly kicks it up a notch.

By now, any self-described women’s soccer fan knows about how Santa Clara upset Stanford in the second round of the NCAA tournament just minutes after star midfielder Andi Sullivan went down with a knee injury in overtime. Regardless of how the scoreline plays out Sunday, this game will be worth watching. The fact that the Cardinal is currently averaging over four more goals a game than the Broncos doesn’t negate that.  Redemption and revenge will be a part of the storyline whether or not Stanford embraces it.