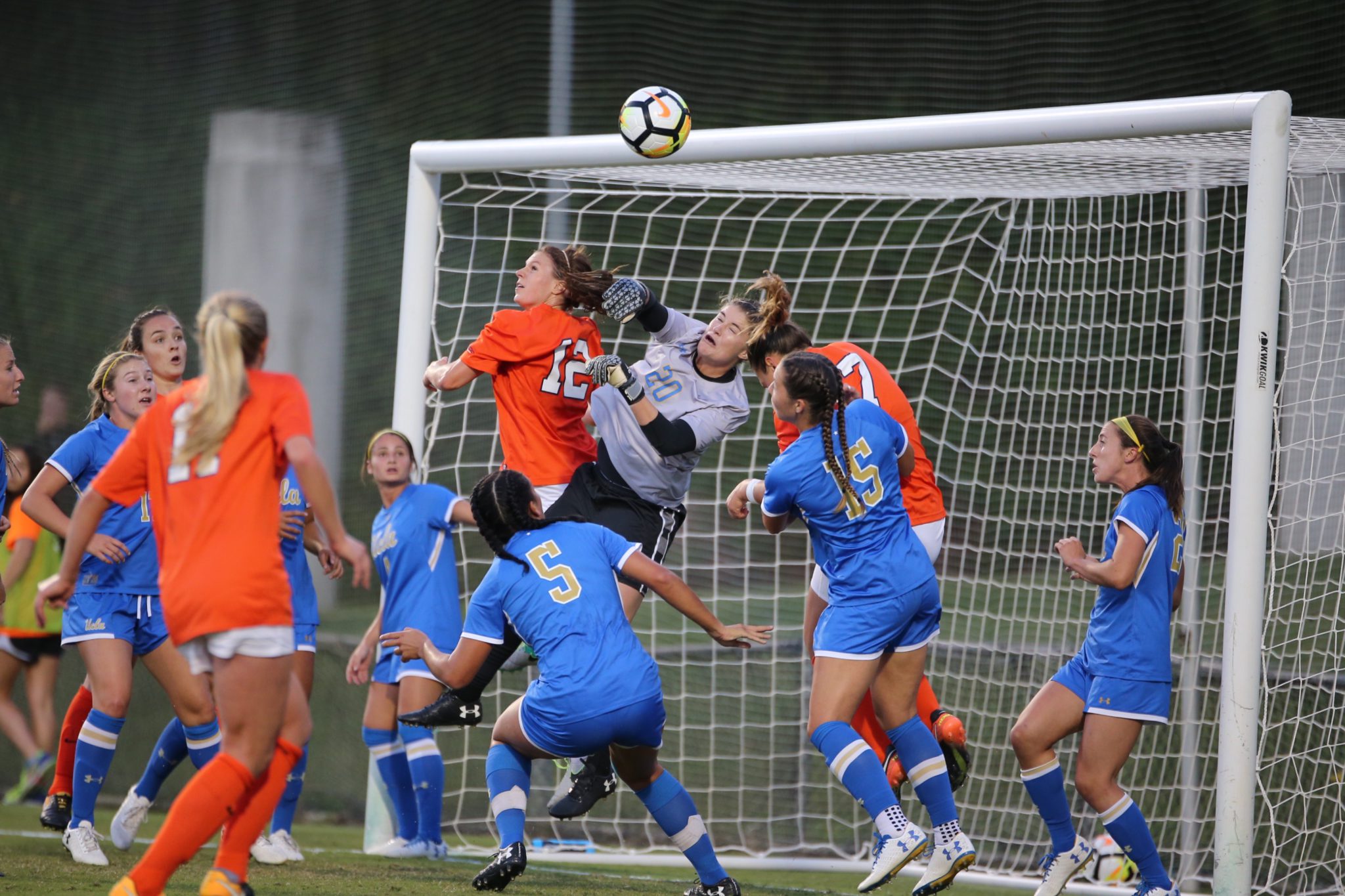 The Thursday night meeting between UVA and UCLA had all the excitement of a postseason matchup. (photo by Matt Riley, UVA Athletics)

Last Thursday’s game between the Virginia Cavaliers and the UCLA Bruins felt a lot like a late season matchup but not solely due to the autumn like temperatures at Klockner Stadium that evening either.

The match was well-contested with the result hanging in the balance until the final whistle. The Bruins walked away with the 2-1 win, which could be important come NCAA tournament seeding time, but both sides came out of the contest with a better understanding of themselves.

For the first quarter of the match, the Cavaliers put the Bruins under duress by instituting a very high line of confrontation. UCLA responded to the press with a series of turnovers and a bit of ball watching. Virginia, however, failed to capitalize.

“I learned that they need to read what the other team’s doing better right off the bat,” UCLA head coach Amanda Cromwell said about her takeaway from the game. “We can’t play into their hands. We almost gave one away there at the beginning, so we just have to be a little bit more sophisticated in how we read the game and how we adjust to what they’re doing.”

Despite the rough start, the Bruins scored on their first real foray into Virginia territory. Freshman Delanie Sheehan played a beautiful ball over the Cavalier defense to fellow freshman Ashley Sanchez, who calmly finished for her first collegiate goal.

While the goal was a tremendous play, the real standout play of the match came when Sanchez, Jessie Fleming, and MacKenzie Cerda combined for the game winner. The Bruins exhibited great movement capped off with Cerda, an outside back, finishing just outside the six-yard box.

A lot has already been said about Sanchez, a highly touted recruit who’s already been called up to the full US national team, and rightfully so, but Thursday night’s contest also demonstrated the skills of Sheehan, another young talent, who appears to factor significantly for the Bruins moving forward. So far, she’s notched three goals and two assists on the season.

Speaking about the midfielder, Cromwell said Thursday that Sheehan has exceeded expectations a bit in the early part of the season.

“She’s been our not necessarily surprise impact, but definitely has had more of an impact than I thought she would right away, and that ball (the assist) just exhibits her vision. Her ability to penetrate on a pass or a dribble is really good.”

Another takeaway watching the Bruins was Jessie Fleming’s role on the team. She displayed a really high work rate and was seemingly everywhere in the midfield. Most notably, she played a vital role on the give-and-go play with Sanchez that set up Cerda.  While certainly still capable of scoring, Fleming looks poised to play the role of provider. Currently, her six assists lead the nation. It will be interesting to see if the Bruins continue to pile on the goals and whether Fleming continues to be the table setter when UCLA enters conference play.

While on the losing side of the 2-1 game, Virginia showed progress especially coming off a weekend that included a loss to Wisconsin and a 1-0 win over Richmond, hardly a power in women’s soccer.

“The little things that we could and should do well that we didn’t do last week, we needed to do that against these guys to have a chance, and we did and so that was good to see,” Virginia head coach Steve Swanson said. “I thought we really raised the bar. If we turned the ball over like we did last week, they are a great transition team. They’re going to punish you.”

On the night, the Cavaliers outshot the Bruins by a sizeable margin, 13 to 5, but the majority of those chances were off frame and didn’t trouble the UCLA defense. In fact, the only Virginia goal of the match came off a free kick taken by Taylor Ziemer.

It’s strange to see the Cavaliers, who have been known for their prolific offense in the last five years or so, struggle with that part of the game, although they managed three goals the following Sunday against the Penn State Nittany Lions.

Postgame Thursday Swanson stressed decision making and execution as areas that his side needs to improve on in order to increase its offensive output.

“I think a lot of that is decisions, decision making,” Swanson said. “Right now we still have a lot of young players in some of those positions, attacking positions, and we’re still learning a bit. I think it’s always going to come down to decision making and can we get enough experience in to do that?”

These marquee August and September matches serve as a litmus test for coaching staffs attempting to prepare their respective teams for the conference schedule and later, the NCAA tournament. They also act as a benchmark for observers to call upon later in the season to see how far, or how little, a team has come. On this measure, it will be interesting to look back later in the season and see how the Cavaliers and Bruins fare.

The Kronick Report: late Pugh winner ends Sky Blue FC’s post season hopes
The Lowdown: This and That from Week 20