With the third to last week of the regular season in the books, we saw some clutch finishes, all with post season impacts. Let’s dive deeper into Mallory Pugh’s late finish, Christine Sinclair’s game winner and Jess Fishlock’s header and the playoff implications that each of these finishes had.

Mallory Pugh scored a late game-winner to give the Spirit a 2-1 win over Sky Blue. (photo copyright Katie Cahalin for The Equalizer)

What Happened: Mallory Pugh scored her fourth NWSL goal of the season in the 85th minute on Sunday night in a 2-1 win over Sky Blue FC.

How It Happened: With five minutes to go in regulation, Mallory Pugh, off a Lindsey Agnew assist, put one away to secure the 2-1 come-from-behind victory for the Spirit. Lindsey Agnew starts driving towards the center of the field a little in front of half way for a few touches as she draws two Sky Blue midfielders. By driving up field, she forces not one, but two NJ midfielders to try and stop her. If you pause the replay of the video right here, you can see that the Spirit are going to be set up great offensively because, as Agnew draws these two midfielders to her, Sky Blue is in a flat back four across the back line. Agnew executes a spin move to dodge both of the NJ midfielders and plays Mallory Pugh a great short through ball as she recognizes that she’s following the play from behind her. Pugh catches up to the ball immediately before the top of the box. She uses one quick change of pace to get past her first Sky Blue obstacle and then she’s starting right now at Sky Blue’s flat back four. Pugh takes a touch and rips one from the top of the box. The NJ back line was not only flat, but also too deep so that no one was able to step to Pugh before she got a shot off. Pugh recognized the little bit of room that she had and made sure she took her opportunity when she had the clear chance to. Her shot was driven and low which helped it dip right past goalkeeper Kailen Sheridan to her low right and Sheridan was unable to keep it out of the back of the net. Pugh’s finish not only gave the Spirit the late win, but also knocked the NJ side out of playoff contention.

85′ – From the top of the box, @WashSpirit‘s @MalPugh fires a low shot into the lower left corner of the goal for a 2-1 lead. #NJvWAS pic.twitter.com/stJqgVbEUC 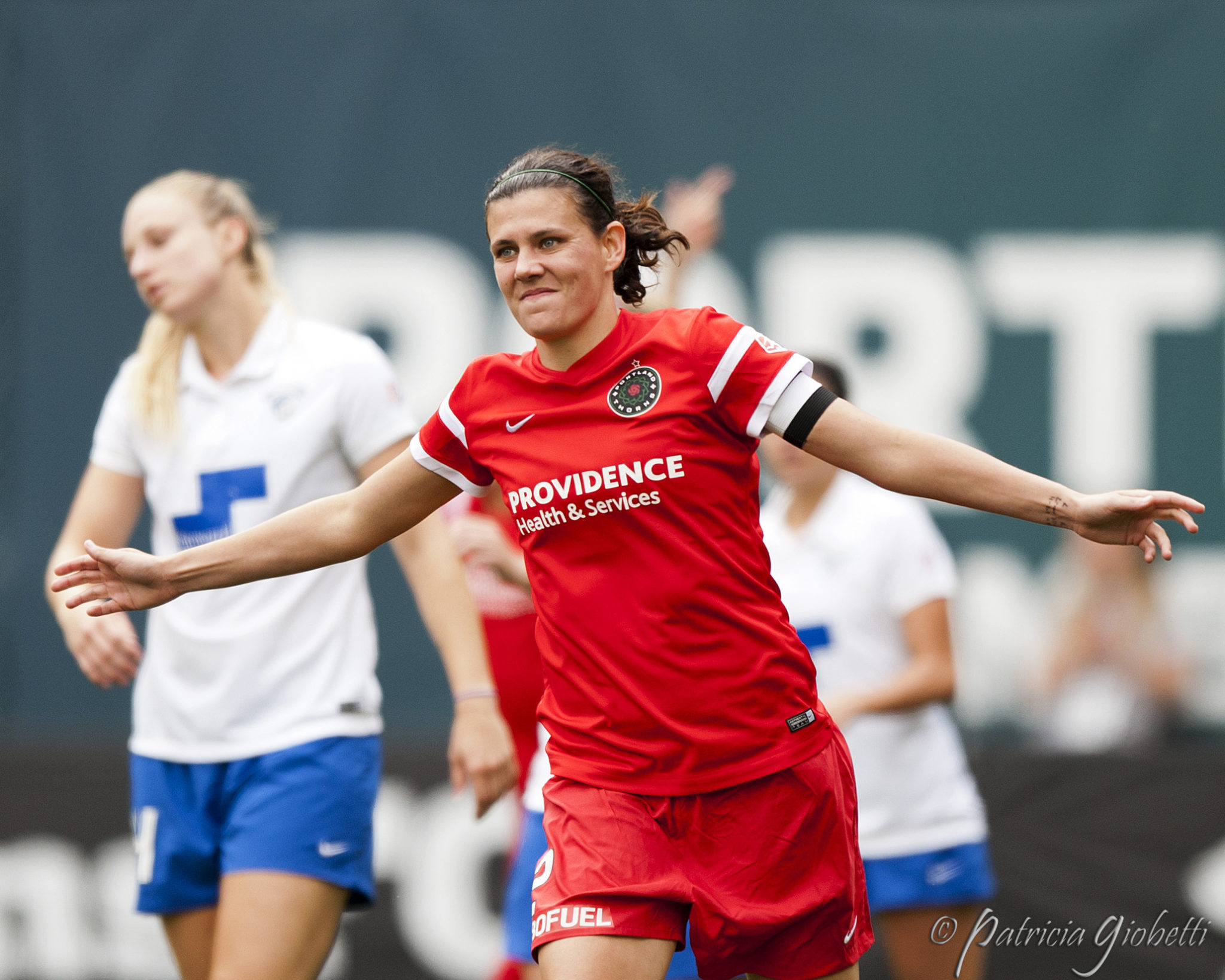 Christine Sinclair scored her eight goal of the season this past weekend for the Thorns in a decisive 1-0 victory over the Boston Breakers.
(Photo Copyright Patti Giobetti for The Equalizer)

What Happened: In the 72nd minute, Christine Sinclair scored the lone goal of the match for the Thorns in a 1-0 victory over the Boston Breakers that secured a home semifinal for Portland.

How It Happened: As one of the best goal scorers in women’s soccer history, Christine Sinclair shows exactly that with her game-winner this past weekend against Boston. No, it’s not the most beautiful finish we’ve all ever seen, but she comes in clutch for her team when they need it and capitalized on her only shot on target all game by making it count. The lead up to this goal sees some great work and hustle by Thorns forward Haley Raso. After a big ball out of the back and a header flicked on, Raso uses her body in a battle against Breakers defender Megan Oyster to jump on the end of the loose ball and settle it at her feet. After a few quick touches, Raso feels the pressure of Oyster and puts the ball right through her legs with a quick touch in the opposite direction. This is some great footwork from Raso in a small space under high pressure. The way she’s able to battle out Oyster to get to the ball first and then take advantage of a defensive misstep in the way Oyster positioned herself, Raso nutmegs her and is then past her and both of these are great moves by Raso. As a second Boston defender quickly comes to help, Raso challenges her too and the ball gets sprayed out wide to an already-on-the-run Sinclair on the right side of the pitch. Sinclair steps up to the ball, now inside the box on the right side, and with no hesitation, buries it into the back of the net. The attacking instinct from Sinclair here is really why she’s one of the best in the world at what she does. She’s not in the best position or even at the best angle to put one in on goal. But, instead of taking a touch to slow down the play, she attacks in flawlessly and uses one touch to rip one low and hard into the back of the net. The ball goes right under Boston goalkeeper Abby Smith and the Thorns win the game 1-0. Sinclair finishing in crucial moments from club and country is no surprise for anyone. Her game-winner and eighth goal on the season locked in Portland to have a home semifinal once the playoffs begin.

72′ – @sincy12 scores her eighth goal of the season to give @ThornsFC a 1-0 lead with a clinical finish. #BOSvPOR pic.twitter.com/WY6I1QEGJP

What Happened: Jess Fishlock scored a header in the 94th minute to salvage a point for the Reign last Thursday night against the Orlando Pride in a match that ended 1-1.

How It Happened:With seconds remaining in a game that the Pride had thought they had in the bag, the Reign tied it up with a fantastic finish from Jess Fishlock in her 100th NWSL game. As stoppage time was coming to a close, Naho Kawasumi launched a cross from the right side of the field. Her cross was great because despite initially looking like it was hit right into traffic of some Reign offense and Pride defense, it perfectly found the head of Fishlock. Fishlock timed her touch perfectly. As the ball comes in, Fishlock is tracking it well. We can see her leave her feet on a jump that not only splits two defenders in the air, but also hits the ball just at the right time where she’s able to perfectly redirect it on goal. If one moment was off on Fishlock’s timing, the ball could’ve gone over her head, missed her entirely, or her redirect could’ve been off target — or many other variations of what actually happened. The timing is so crucial from Fishlock and we see her execute flawlessly. Her header doesn’t just get on target from 10 yards out, but it actually lofts right into the upper 90 right corner of the goal. Pride keeper Ashlyn Harris, to her dismay, is unable to even get a hand on it. Not only did Fishlock score a highlight reel goal, but she also did so in the 94th minute of a game with playoff implications. Big player, big play!

90-4′ And @JessFishlock‘s answer via a header to tie the score in stoppage time! #ORLvSEA 1-1 pic.twitter.com/7iOxyGIxuz