As the 2017 NCAA season quickly approaches conference play, a number of teams closed out non-conference play against top opponents, while others squared off against their rivals. Although the in-state rivalry between South Carolina and Clemson was rather anticlimactic and the highly-anticipated clash between Florida and Florida State was cancelled because of Hurricane Irma, there were a number of highly exciting matches over the course of the weekend. Here’s a quick recap of three matches you should definitely know about from Week 4.

No. 1 @UCLAWSoccer walked out of Virginia with a win tonight over the No. 8 Hoos.

UCLA is looking very much like the team to beat, now only one of seven teams to have won every game of the season thus far and the highest-ranking team to do so. The Bruins have sat comfortably in the nation’s top spot for the past two weeks, and they are unlikely to relinquish their No. 1 ranking after defeating the No. 8 UVA Cavaliers in their house on Thursday night.

For anyone wondering why there was so much hype around Ashley Sanchez, the freshman forward who was called into the senior USWNT camp last year when she was 17 years old, look no further than this game. Sanchez scored her first goal of the season off a beautiful feed from Delanie Sheehan. As good as Sheehan’s ball in was, Sanchez’s first touch was even better, giving her control of the ball in space before finishing with her second touch to give the visiting Bruins the lead.

The Cavaliers drew even with UCLA in the 38th minute off when Taylor Ziemer sent a free kick from the top of the arc and into the left upper 90. The game was tied at the half, but it wouldn’t stay that way long as Jessie Fleming and Sanchez connected to set up senior MacKenzie Cerda early in the second half to give the Bruins the lead they’d take with them to the final whistle. Fleming moved into the Bruins attacking half before playing it over to Sanchez. Sanchez flicked the ball with the outside of her foot to send it forward for Cerda, who broke through a pair of Cavalier defenders and one-timed the ball past Cavalier netminder Laurel Ivory for the game winner. 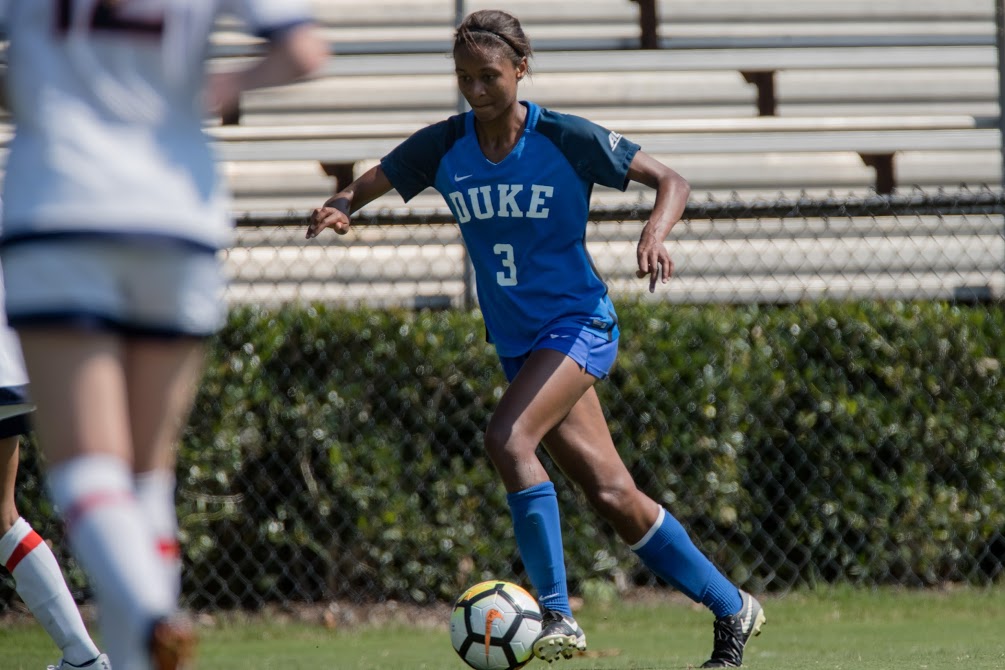 Imani Dorsey scored her sixth goal in as many games, tying a school record. (photo by Shane Lardinois)

West Virginia opened the 2017 NCAA season as the No. 1-ranked team in the country despite having fallen in the 2016 College Cup Final to USC. After winning their season opener against then-No. 5 Georgetown, the Mountaineers have struggled a bit, none more noticeably so than Friday night’s 4-0 loss to No. 11 Duke.

As the scoreline suggests, West Virginia was unable to find the back of the net, but it wasn’t for a lack of opportunity. The Mountaineers outshot the Cavaliers 14-11 and put five shots on goal for the night, but senior goalkeeper E.J. Proctor made just as many saves to deny the Mountaineers and earn the second shutout of the season, increasing her career total to 23.

Duke, on the other hand, didn’t have the same problem. Once Imani Dorsey opened up scoring with a flawless long-range strike in the 28th minute, the Mountaineer defense struggled to contain a Blue Devil offense that put away two goals in each half to convincingly upset the No. 3-ranked team in the country. Junior midfielder Kat McDonald followed Dorsey’s goal with one of her own in the 38th minute, while junior Kayla McCoy scored a second-half brace to complete the scoring on the day.

The win extends the Blue Devil’s win streak to six, their longest since winning seven straight in 2011. It also ended the Mountaineers’ 43-game home undefeated-in-regulation streak that began with a 2-0 win over Duke on August 29, 2014. Dorsey’s goal was also her sixth goal in as many games, tying a school record for scoring in consecutive games.

I try not to focus on any one team more than others, especially not in the same weekend recap (especially one consisting of only three games), but it’s hard to leave out Sunday’s match between Virginia and Penn State when it was one of the weekend’s most fun and exciting games. The Cavaliers were unable to upset UCLA heading into yesterday after but they didn’t have the same fate against Penn State, getting the final say in a 3-2 win over the No. 5 Nittany Lions

The Cavaliers struck first in a back-and-forth exchanging of goals thanks to Courtney Peterson, who had favorable winds at her back when she sent in a left-footed shot from the left flank, well outside the area, that sailed just over Penn State goalkeeper Rose Chandler’s reach and into the side netting. The Cavaliers followed Peterson’s goal with multiple shots on target, but Chandler stopped each one to prevent the Nittany Lions from extending their lead in the first half. Instead, Hailey Erchard struck next for the visitors to equalize with less than two minutes remaining in the opening half.

It didn’t take long for the Hoos to retake the lead after returning from the locker rooms, with Betsy Brandon scoring off a header in the first five minutes of the second half. Penn State would once again level the score, this time via a penalty kick awarded after a scrum in front of the goal resulted in a handball inside the box. Virginia keeper Laurel Ivory guessed right with her diving attempt at a save, but Emily Ogle effectively placed the shot out of her reach to convert.

However, a bad tackle resulted in a Cavalier free kick within striking distance, and strike they did when Phoebe McClernon’s ball in sailed just over Chandler’s reach and bounced into goal. A Penn State assistant coach was ejected following the goal-scoring play after arguing with the assistant referee about contact made with Chandler on the play. Despite the coach’s dispute, the Cavalier’s third goal stood, giving them the win over the visiting Nittany Lions.