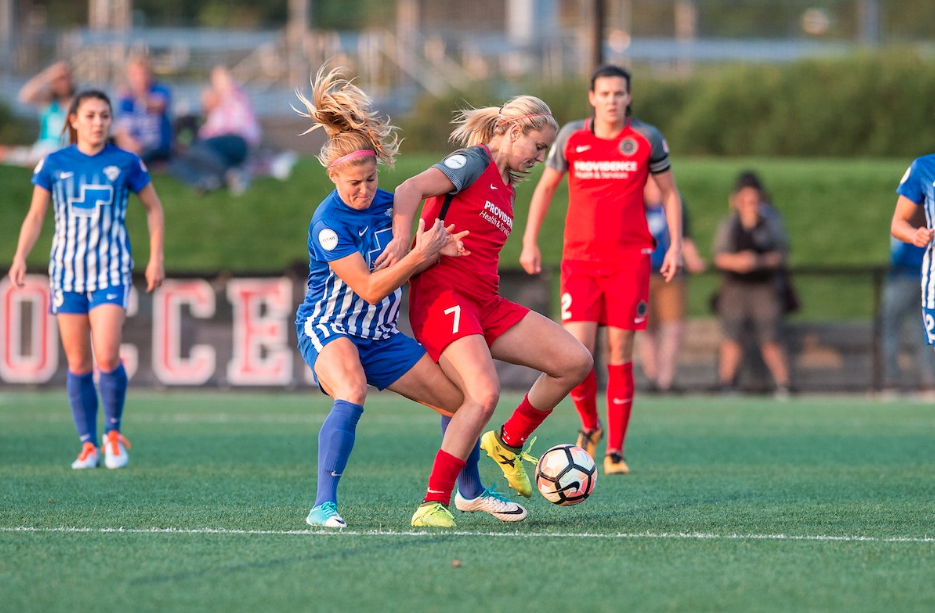 Going into their match against the Boston Breakers on Saturday night, the Portland Thorns needed all three points in order to secure home advantage in the upcoming 2017 NWSL semifinals. They did just enough to complete that mission, winning 1-0 behind a stellar combination against the run of play by Hayley Raso and Christine Sinclair.

Bringing some fire to the tail end of their season, Boston started the match on the front foot, particularly with defenders Midge Purce and Allysha Chapman pushing forward and getting involved in the attack. Purce in particular had a strong game, going head to head with Meghan Klingenberg for much of the match, and creating a solid number of chances. However, Portland keeper Adrianna Franch was consistently solid in goal, and kept Portland’s defense organized enough to stop Boston from utilizing their advantage in possession towards a final strike to break the stalemate.

With solid play by both goalkeepers, and a bit of bad luck on Boston’s side, the first half of the match ended 0-0. Despite Boston’s best efforts, this definitely put the Thorns at the advantage, considering they’ve been a team that has developed into matches throughout the season, winning a majority of their games that have ended the half tied.

At the onset of the second half, Boston did everything they could to break that cycle, with a great look from Natasha Dowie going over the crossbar in the 49th minute, and Purce sending in a perfectly weighted cross for Julie King in the 58th minute that was headed just wide of goal. However, Portland stayed true to their game-plan, and proved deadly in the counter-attack. In the 72nd minute, a clearance from the Thorns defense found Hayley Raso just outside the box, who worked her way through a number of Boston players before dropping the ball off to Christine Sinclair, who’s far-post shot beat Boston keeper Abby Smith to put the visitors up 1-0, crucially shifting the momentum of the match.

72' – @sincy12 scores her eighth goal of the season to give @ThornsFC a 1-0 lead with a clinical finish. #BOSvPOR pic.twitter.com/WY6I1QEGJP

Breaking the tie seemed to give a previously sluggish Portland team a burst of energy, and they efficiently held Boston away from the ball in the dying minutes of the match. Boston couldn’t quite regain the confidence they had on the ball in the earlier stages in the match, and the Thorns were able to walk away from the game with a significant 1-0 win. Boston will have to look at the match as a victory in small stages, with Rose Lavelle getting further back into the fold while coming off of injury, and Midge Purce looking like a real bright spot in the right winger position going forward. But it was ultimately Portland that handled exactly as much business as was expected of them, and they can rest easy going into the international break knowing that they’ll be featuring a second consecutive semifinal at Providence Park come October.