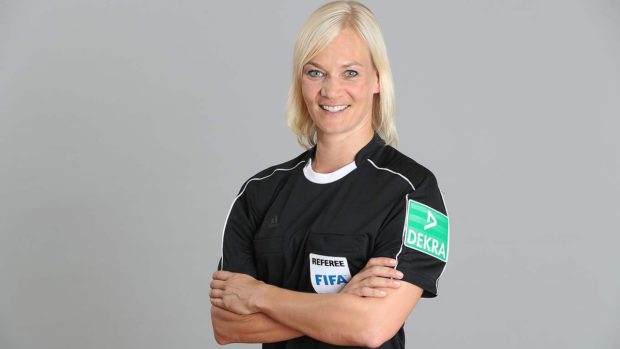 This weekend, Bibiana Steinhaus is set to make history as the first woman to referee a match in the Bundesliga. She will referee the match between Hertha and Werder Bremen at Berlin’s Olympic Stadium on Sunday.

Steinhaus was first included on the list of officials eligible to referee Bundesliga matches back in May. She’s been a referee for 18 years, making her first appearance as an official in 1999 in the Frauen-Bundesliga. Steinhaus has notable international experience as well. She refereed the final of the 2011 FIFA Women’s World Cup between the USWNT and Japan and the final for the 2012 London Olympic Games.

On Sunday, she will become the first woman to referee in any of Europe’s top leagues inclusive of the Bundesliga, the Premier League, La Liga, Serie A or Ligue 1.

Today, Jodie Taylor was officially named as the 2017 England Women’s Player of the Year as was announced at the FA Women’s Football Awards.  She was shortlisted for the award in August with Lucy Bronze, Jordan Nobbs, and Jade Moore.

Taylor had an exceptional year for England specifically as it relates to her performance in the 2017 European Championships. She recorded a hat trick in England’s record 6-0 defeat of Scotland. She tallied twice more against Spain and France to total five goals on the tournament. She claimed the Golden Boot as top scorer of the tournament despite England’s exit in the semifinals.

This award is massively deserved.@Jodes_14 is England Player of the Year pic.twitter.com/Eb67oaoTY3

The Netherlands lifted their first ever European Championship trophy this past summer. (photo courtesy UEFA)

For the Netherlands, the match against Norway is the first in the qualifying series on the road to the 2019 FIFA Women’s World Cup taking place in France. Head coach Sarina Wiegman was excited to see this much support for her team, especially to see the support last post-European Championship. “It’s fantastic that the first game has already been sold out. It’s beautiful that the fans will stay behind us,” she said in the KNVB’s official release.

In addition to Norway, the Netherlands are set to take on  Ireland, Slovakia, and Northern Ireland in qualifying.

Le Parisien reported today that PSG women’s side will be forced to find a new home field as priority has started to be given to boys youth teams at the club. Their game last Sunday at Lodges camp may be their first and last home season game there this season.

Officials at PSG have prioritized that the pitch be reserved primarily for the teams from the training center, which includes the U-19 and U-17 youth mens’ sides. Head coach Patrice Lair, who has fought for his home matches to be at the stadium, will now need to find a new home for the club starting with the next home game set for Saturday, September 23 against Lille. The club is exploring a return to Charlety stadium, where they have previously played, but according to Le Parisien, might not be possible as it has been deemed by Lair to be “impersonal and unsuitable for women’s football.” A more likely alternative may be for the team to play at Jean-Bouin stadium, just off the Parc des Princes, where they will be sharing a field with Stade Francais rugby players.