So far this season there’s been quite a bit of reshuffling at the top as the number of upsets continues to climb. As the conference play looms, some teams are challenging themselves a bit more in terms of opponents while others face familiar in-state foes this week. Here’s a look at a few collegiate matches to catch this weekend.

No.  4 Clemson Tigers  vs No. 7 South Carolina Gamecocks 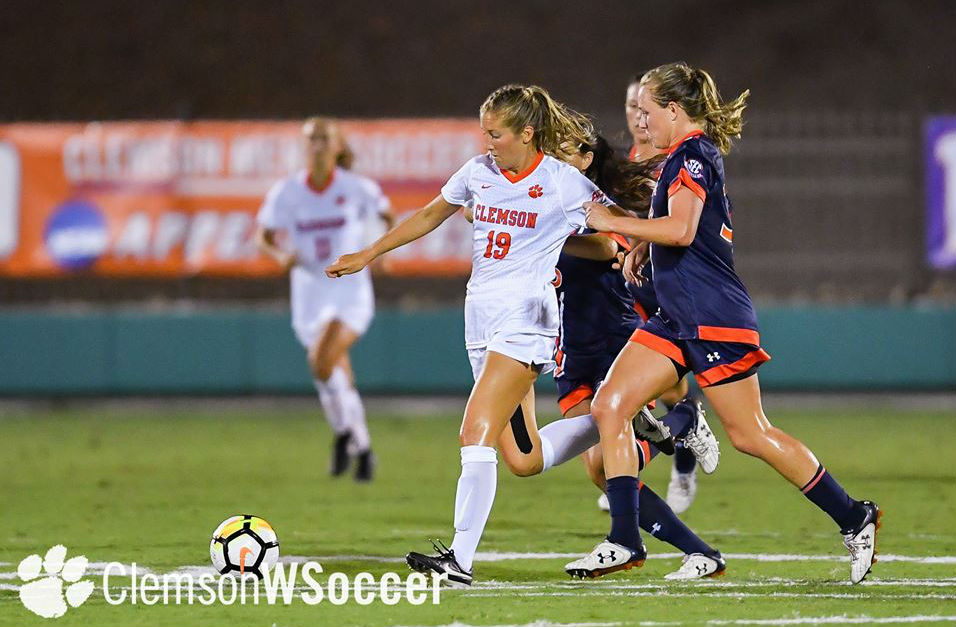 Midfielder Jenna Polonsky has been a key component to Clemson’s success this season, leading the team in both goals and assists. (photo by Carl Akerman, courtesy Clemson Athletics)

An in-state rivalry featuring two highly ranked teams? Yes, please. Clemson is one of just fourteen teams with an unblemished record but in truth, the Tigers haven’t been mightily tested so far this season. That’s bound to change when Clemson meets the Gamecocks led by tenacious senior forward Savannah McCaskill. McCaskill who leads South Carolina with 3 goals and four assists on the year will challenge a Tigers’ backline that has conceded just once this season.

Offensively, Clemson may look to defender Sam Staab’s powerful left leg to get Tigers attackers in behind or her lethal long throw-in the wreak havoc anytime Clemson is near the penalty area. Also, keep an eye on midfielder Jenna Polonsky who sets the play in the middle of the park. Polonsky, who was granted a rare sixth year of eligibility, leads the team in both goals and assists in her sixth year.

These two sides rarely meet up but when they do, it’s been thoroughly entertaining. (See the 2013 College Cup Semifinals or 2014 NCAA Quarterfinals.) It will be difficult for the Cavaliers to stifle the red hot Bruins who are averaging 3.33 goals per game on the young season.  Even on the road, the Bruins have to be favored in this one.

Essentially, UCLA has a litany of players who can step up and be the difference maker in a match. Hallie Mace and Julia Hernandez each have five goals on the year with Hernandez averaging a goal for every 40 minutes played. Meanwhile Canadian sensation Jessie Fleming is tied for third in the nation in assists with five.  Virginia, while not lacking in talent, doesn’t really seem to have a dynamic offensive player that consistently annoys backlines. If the Cavaliers are to be victorious, expect another grind out performance similar to the team’s big overtime win against West Virginia earlier in the season.

How to Watch: WatchESPN

The Jayhawks climb their way into the United Soccer Coaches’ poll thanks to a 2-1 victory over defending the national champions, the University of Southern California Trojans. Now, Kansas will face a stiff test against Texas A&M. The Aggies have also been rising in the United Soccer Coaches poll after starting the season unranked. The question is which team will continue their forward momentum?

The Jayhawks are led by center forward Grace Hagan who has two goals and three assists on the season. Meanwhile, Austrian international Sophie Maierhofer, a member of the Euros squad that reached the semifinals this summer, paces Kansas with three tallies on the year.

For those keying on players likely suit up professionally, keep an eye on Texas A&M senior Mikaela Harvey, who whether it shows up in the box score or not, will be central to the Aggies offensively.