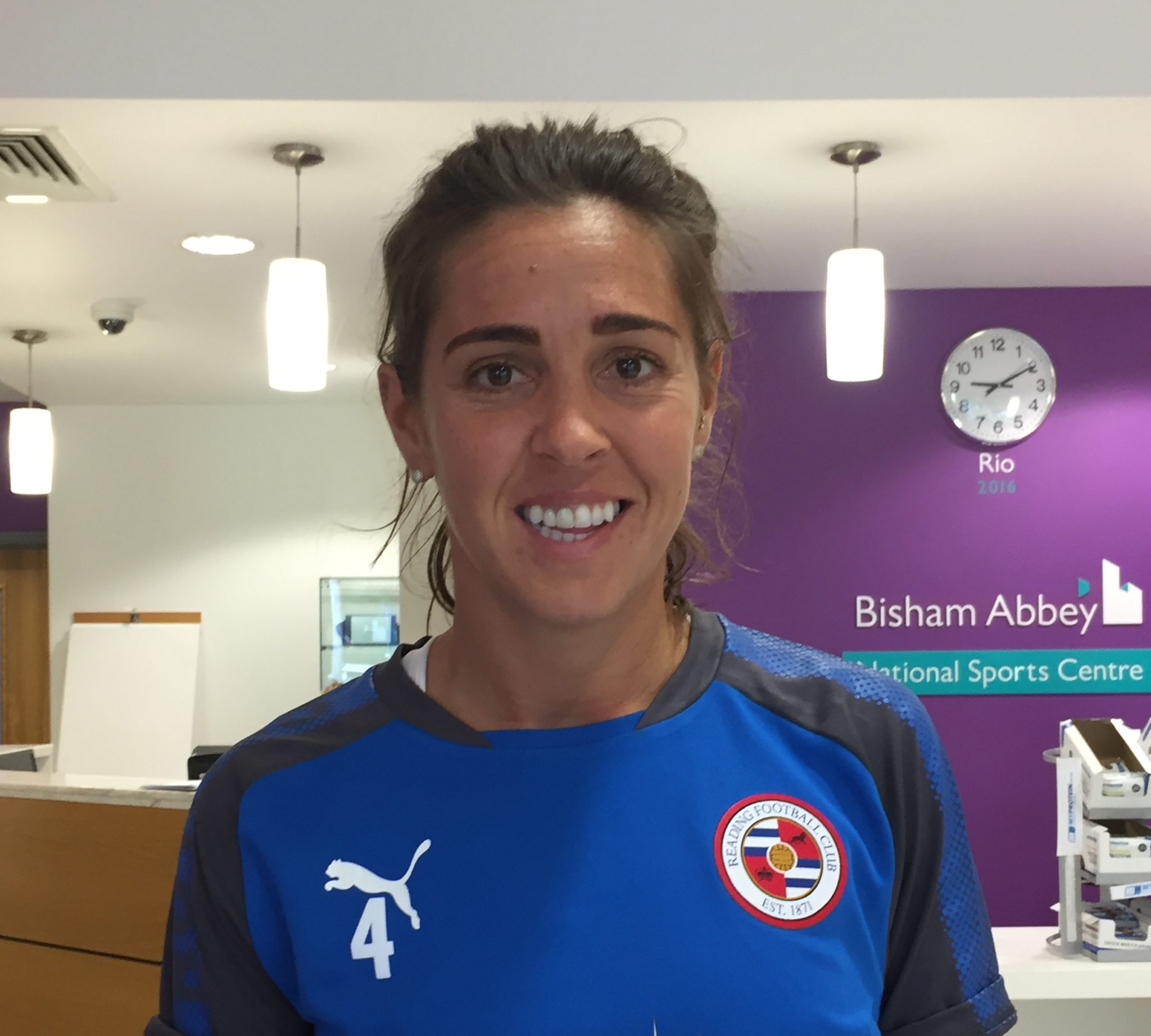 LONDON – Reading look poised to make some noise when the WSL campaign kicks off later this month on September 23. The Royals made a legendary acquisition on August, 16, signing England international, Fara Williams to a two-year contract. A move that surprised many people was in the works for a while and no shock to Williams.

After spending the WSL Spring Series with Arsenal, Williams was looking for a new opportunity. She was hardly playing in Arsenal’s crowded midfield, and football wasn’t as fun as it had been. Williams wanted to change her environment as she reflects on why it didn’t work out in Arsenal.

“A few things, not maybe playing the amount of minutes I probably would have liked at Arsenal. Not settling there how I probably should have, for different reasons. On the pitch stuff, off the pitch, stuff in my personal life was difficult when I joined. I really struggled to fit it, more so with my personal stuff, and it probably hindered me on the pitch. I didn’t get the minutes I needed, or wanted,” Williams said.

As Williams sits down to discuss her new life with Reading, she is excited, motivated, and happy to be with a club that challenges her, and improves her as a footballer. She is thrilled with style of play, tactics, and general enthusiasm playing for the Reading brings.

“It’s a refreshing environment, the environment is so nice, comfortable,” revealed Williams. “I feel like I’ve been here forever. I feel like I know everybody well enough already. I went home, and for the first time in a long time, I was talking about a training session, that I was actually buzzing about. The detail of the session we got. I felt like I took my career back another 10 years.”

The 33 year-old, Williams has 165 international caps to her name, and she is clearly not finished with football, and nowhere near ready to hang up her boots. While many outsiders have proclaimed that Williams’s best days are behind her, she doesn’t see it that way. You’re only as old, as you feel. Williams admits that she’s in the best shape she’s been in for quite a while. She’s fit, and wants to prove that age is just a number.

“I know people talk about age,” Williams said. “It’s one thing we talk about quite often in England is age, we put age, and time on players. If you keep yourself in good shape, the likes of Kelly Smith, Rachel Yankey, and Becky Easton did it. The older generation of players somehow seem to know how, to keep themselves in shape to compete at this level for as long as they want. It’s up to them. I want to be a player, that I’ll decide.”

Buzzing to have singed for @ReadingFCWomen can't wait to get started on this new chapter of my career. Hoping to help continue the great work already being done and bring some success to the club ?⚪️

The retirement of England legend, Wayne Rooney came as no surprise to many football fans who follow ‘The Three Lions’. The FIFA 2018 World Cup is on the horizon and Rooney called it a day on his international career. Williams won’t be holding a press conference to make a similar announcement. She won’t Rooney, and call her career.

“No,” Williams quickly answered. “Wayne Rooney, this is what happens with players. They’re so honest, and want to do so well for their country, and their club. They’re mostly criticized for the work that they do. Wayne Rooney is an unbelievable player for England, and to retire at 31, it’s sad to hear. You want players like that to continue and share their experiences with younger players coming through. To me, he retired too early. We talk a lot about age, but the passion and desire to win. It’s just a winning mentally that they have, and I have in me that keeps me going, and driving forward. I don’t want players to come and take my place just yet.”

Most capped male player ??but Fara Williams has 165 appearances in an England shirt. https://t.co/ks95Hst6H9

Williams’s participation at Euro 2017 was quite limited. She earned a start against the Netherlands in the semifinals, when a suspended Jill Scott was unavailable. England may have started off the tournament with a resounding win over Scotland, but they peaked too early. England had everything going for them until the hosts turned up, and won their semifinal.

“I mean we’re disappointed as a whole,” admitted Williams. “We went there to win it, we said that from match day, one. We were there to win it, so to lose in the way we did, it was disappointing. It hurt, a lot of players were hurt from it. We knew that we could of, and should of done better. We actually didn’t turn up on the day, and Holland were the better team.”

If there is a lasting Fara Williams memory from Euro 2017, it’s no doubt her open back-headed pass to unsuspecting goalkeeper, Siobhan Chamberlain. The keeper wasn’t ready, and Netherlands’ Daniëlle van de Donk raced in and deposited the ball into the net.
Williams was ripped to pieces in the press, and Sampson was strongly critiqued for selecting Williams in his starting eleven against a dominant Netherlands midfield. What exactly happened on that crucial play, and how has Williams handled the aftermath?

“I thought I was playing for Arsenal, that’s what happened,” Williams said jokingly. “I forgot. People have asked me about this. Nine times out of ten, when I do that same header, the keeper collects it. I told my teammates before the game how clever van de Donk is. She’s a smart player, she’s somebody that sneaks up on you. It was one of them, I didn’t see her, she was blindside of Lucy (Bronze) and Steph (Houghton). I thought it was a nice comfortable header back, but a little bit of miss(ed) execution, and hesitation from the keeper. It was a mistake, but a mistake that nine times out of ten, isn’t a mistake.”

Not one to shy away from the spotlight, Williams took the brunt of anger from fans, media, and onlookers. She’s held her hand up and taken responsibility. In a her international career of 16 years, there have been many highs and lows. Williams knows it was an error, but she isn’t going to hide away and lose any sleep over it.

If that is the last time Fara Williams represents England at the international stage, she hopes that she isn’t remembered for that specific play (editor’s note: Williams is on the camp roster for England’s upcoming World Cup qualifier). She’s always given her heart for her country, and played like every game was her last. Williams has done so much to progress women’s football in England. She’s not closing any curtains, but if that’s that, Williams knows how she would like to be remembered by teammates, fans, and media.

“I would say I hope that it’s never the last time,” Williams said. “I’m still fit, and I’m hoping to show the side of me that shows the players, fans, whoever, that I don’t give up on myself. I’m not finished. One thing I will walk away from the game–I was me. Every time I played, I did me. I didn’t do anything that anybody else said, I didn’t try to change the style. I didn’t try all of a sudden to become a runner in the game. I knew what I was good at, and what I was strong at, and I stuck to it. If it meant I started because of it, I was happy with that, if it meant I didn’t, I was also happy. I hope that people would remember me for being an honest player, and a player that always did what I was good at.”

The Reading chapter is just evolving as Fara Williams continues to do what she has always done, play football. She’s never been bothered by what others think of her. You need a thick skin as a footballer, and Williams is determined, motivated, and rejuvenated at Reading. Fara Williams the footballer, will play for as long as she wants.

Wednesday Roundup: Steph Labbe out for season on medical leave of absence
Tobin Heath among 22 called into camp for USWNT-New Zealand matches