Run of Play: The Houston Dash don’t Stick to Sports 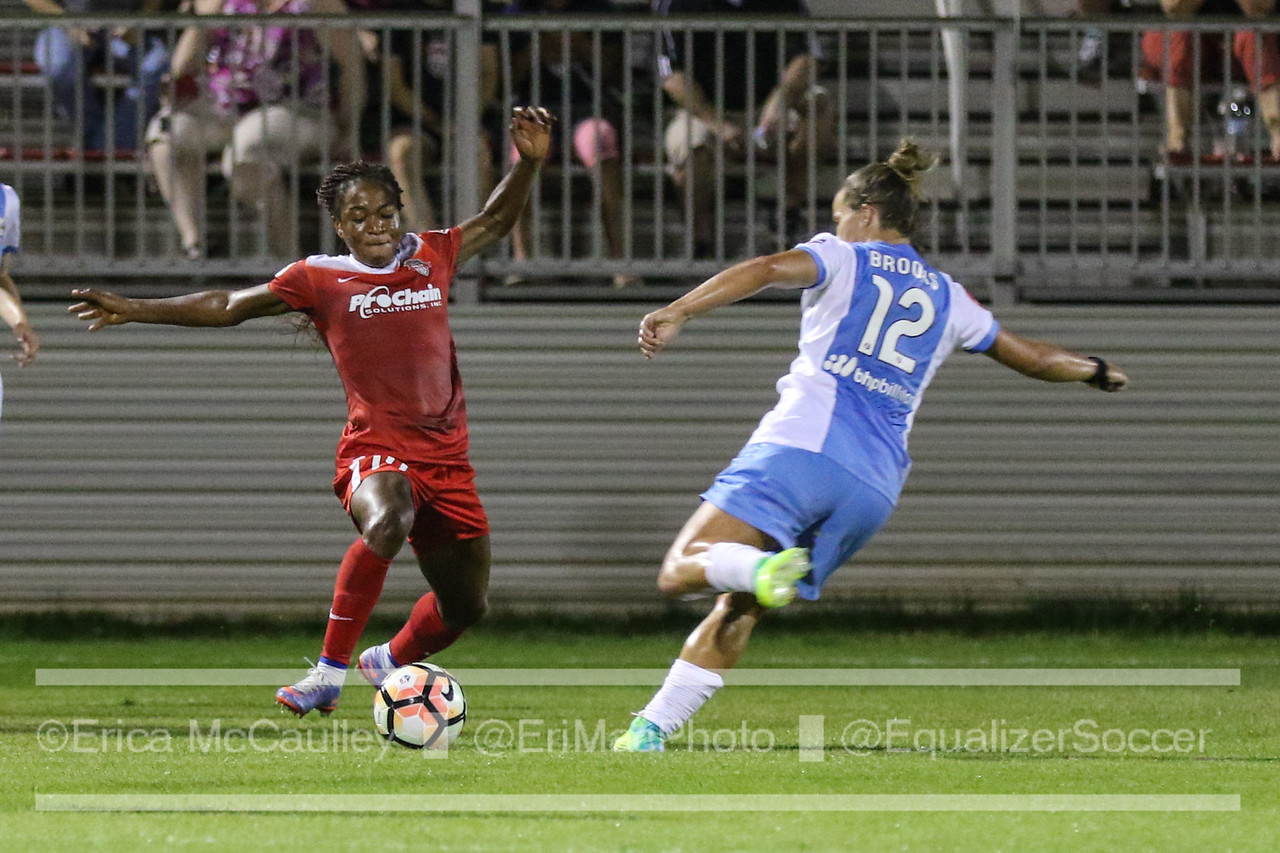 FRISCO, TX. — It’s usually a bold move to wear orange inside Toyota Stadium. That’s because the stadium, located in Frisco, Texas, is the home of FC Dallas, fierce rival of the Houston Dynamo. The teams battle each year in the Texas Derby for ownership of El Capital, a working replica Civil War-era cannon.

However, last Sunday, the stadium filled with over 1000 fans sporting the orange and blue of the Dynamo’s sister team, the Houston Dash. Dynamo and Dash advertisements for upcoming games filled the big screen while Tex Hooper, the FC Dallas mascot, cheered alongside the Bayou City Republic, the Dash supporter group.

Due to the aftereffects of Hurricane Harvey, which dumped literal feet of water on the Texas coast and caused massive flooding in and around Houston, the Dash’s game against the Seattle Reign was moved to Frisco. Their earlier game against the North Carolina Courage was postponed and has yet to be rescheduled.

“It’s amazing,” said midfielder Caity Heap, who hails from nearby McKinney, Texas, and grew up playing on the FC Dallas practice fields. “Texas is kind of our home, so being here and playing here is like a home away from home for us.”

Prior to the hurricane’s landfall, Heap and several of her teammates escaped Houston to bunker down at her house in McKinney. Others stayed and rode it out, which according to defender Amber Brooks was a bit concerning.

“Everyone was everywhere and worried about each other’s safety, and it was really good that we were able to come together [in Dallas].”

The Dash staff and players met in Frisco early last week once Toyota Stadium agreed to host the match. There they were given use of the practice fields and facilities, while the match was promoted by the FC Dallas Foundation as a fundraiser for Red Cross relief efforts.

However, the ticket proceeds are far from the only way the Dash are helping their city recover. Forward Janine Beckie, who has called Texas home for nearly seven years after attending Texas Tech University prior to being drafted by the Dash in 2016, began a GoFundMe campaign to raise funds for the Hurricane Harvey Relief Fund created by the Greater Houston Community Foundation. The campaign exceeded its initial $10,000 goal, which has since been raised to $12,000.

“Texas has a huge, special place in my heart, and I felt really helpless,” Beckie explained. “It was the least I could do. I had some help from one of our managers to start the website, and we just got the word out there.”

“Hopefully I’ll get to be a part of that, which would be really cool, and I think we could do some really cool things with that,” said Beckie of the charity match. “I’m just happy to have contributed in some way.”

Sports present an interesting dichotomy. Under normal circumstances, battle lines are drawn in permanent ink, and rivals are the bitterest of enemies. For fans, the trash talk will go on long after the stadium lights shut off, while for players, they tackle hard from the moment of kickoff but often give big hugs and swap jerseys the moment the final whistle is blown.

On a larger scale, soccer can be a universal language. No one needs to speak Portuguese to watch Marta dribble past a backline or understand German to appreciate the ease with which Dzsenifer Marozsán can slice up a midfield with a through ball. And in times of tragedy, soccer can be a bridge between cultures, a respite from harsh reality, and a healer of broken spirits. One has to look no further than the 2011 Women’s World Cup final. While many USWNT fans have never gotten over their bitter defeat, no one can deny that for champions Japan, the victory couldn’t have been timed better, as the country was still reeling from the devastating earthquake and tsunami earlier that year.

Unfortunately for the Dash, they did not get their Hollywood ending, falling 0-1 to the Reign and all but dashing their playoff hopes in the process. Players and coaches alike recognized the difficulties of the match while avoiding making excuses and trying to move forward, on and off the pitch.

“The most important thing is to get back and help, help Houston as much as we can with whatever we can,” said head coach Omar Morales. “At the same time, just get back to the training field and try to get better.”

“Some things are bigger than football, and everything that has happened around this game is to that,” acknowledged Seattle coach Laura Harvey. “Credit to them, I think they came out and through all their adversity showed their character.”

I have more inside me for tonight then I have in a long time… tonight we get the opportunity to represent something far more than football – the wonderful people of Houston, and the incredible display of selflessness, love, and service that has been the last week. Although I wish we were in Houston tonight with our city, we are thankful to be here, we will show you what it means to be #HoustonStrong. It's game day. This is for our people, this is for our city, this is for our home.

New acquisition Kristie Mewis hasn’t even been in Houston yet, meeting the team in Dallas after her trade from Chicago for Morgan Brian and immediately playing 90 minutes for her new team.

“I am very fortunate to have represented this city tonight. It made me so proud, and I was honored to be part of it.”

For Brooks, the loss was a bitter pill to swallow, but it’s all about moving on. “I’m proud of the girls. It was a tough week,” she said. “We just gotta keep moving forward. We have a lot of pride and a lot of fans and a great city to play for.”

The Dash returned to Houston on Monday to begin not only preparing for Saturday’s game at North Carolina but to help their city rebuild. According to Brooks, no players suffered losses, but some staff members did have flooding in their homes.

For Beckie, the fundraiser isn’t enough. She’s eager to get her hands dirty – literally. “I’m really excited to get back to Houston and actually get to do some stuff with my hands,” she explained. “It’s a great city with great people, and they deserve more.”

If you are able, please consider donating to one of the fundraisers above, or text HARVEY to 90999 to donate $10 to the Red Cross relief fund.

Pride-Reign moved up to Thursday due to Irma
Wednesday Roundup: Steph Labbe out for season on medical leave of absence