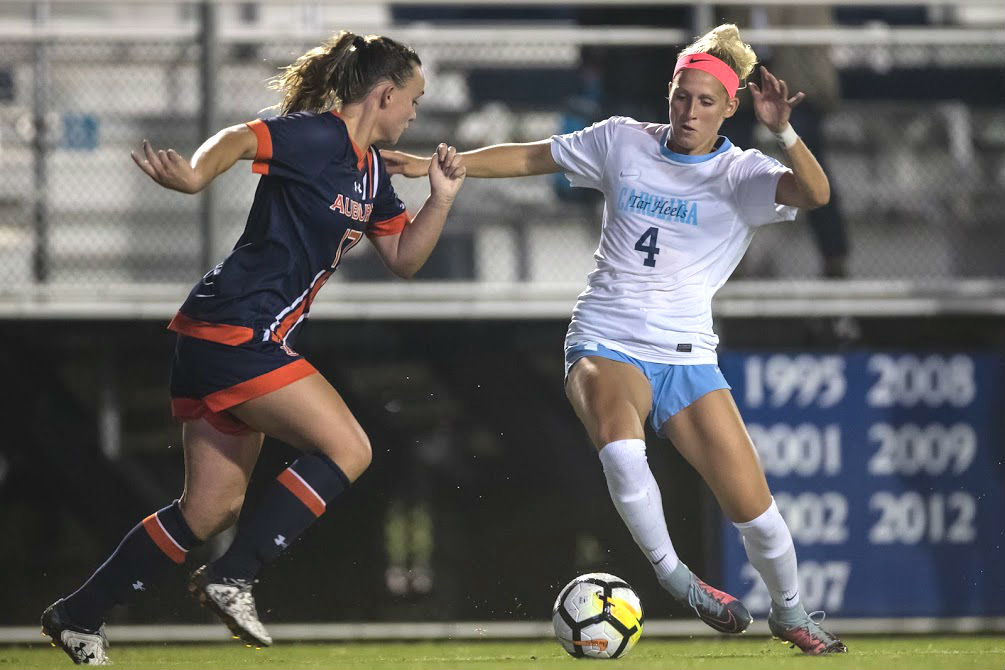 It might be a holiday weekend, but there was no rest in NCAA soccer, as over 250 games played out around the country. Over the last three days, there were shutouts, upsets, and even comebacks of the Sunshine Sully variety to keep fans entertained. Here’s a quick recap of five of the most talked about games of NCAA Week 3 action.

A 5-0 win over an unranked, nonconference opponent normally wouldn’t be anything to write home about, but North Carolina’s dominant performance against Auburn Friday night gave the Tar Heels their first shutout of their season. The five Carolina goals were the most scored in a game since August 2015 when they beat Fresno State, 7-0.

Auburn also isn’t just any opponent. The Tigers entered the season as the No. 10-ranked team after their historic run to last year’s Elite Eight, but a draw with Lipscomb followed by a double overtime loss to Clemson saw the Tigers fall out of the rankings ahead of Friday night’s match. Although they still have senior Kristen Dodson, who broke the program single-season points record last year, the Auburn attack doesn’t look quite as dangerous in the wake of Brooke Ramsier’s and Casie Ramsier’s graduations. Auburn was held to just two shots all game, both of which came in the first half.

UNC, on the other hand, clearly did not have the same offensive struggles. They registered 23 shots on the match, and four different Tar Heels worked their way onto the scoresheet. Freshman Alessia Russo scored the lone goal of the opening half, but Dorian Bailey (penalty) and Miah Araba got singles and Joanna Boyles bagged a double in the second.

Check out all five goals from tonight’s victory over Auburn#GoHeels pic.twitter.com/JL7zbORF1h

No. 1 UCLA remains undefeated with 1-0 win over BYU

No Mallory Pugh, no problem, at least not for the UCLA Bruins who defeated BYU, 1-0, Friday night to remain perfect on the season. The Bruins will likely hold on to the top spot in the nation  for another week after the win against BYU, despite the Cougars slipping out of the Top 25 after a five-game winless streak to open their 2017 campaign.

The Cougars did hold UCLA to their smallest win margin of the season, no small feat as UCLA boasts the fourth best scoring offense in the nation, and the reigning Pac-12 Offensive Player of the Week, Hailie Mace, had seven shots of her own on the night. Mace continued her scoring streak when she left-footed a long-range strike off a brilliant Jessie Fleming pass for the game winner. The goal is Mace’s fourth in the last three games and her fifth on the season. Goalkeeper Teagan Micah earned the clean sheet after recording a season high six saves.

First goal of the night..#UCLA goal by #16 Hailie Mace. pic.twitter.com/vH8BTNfKZu

The No. 6 West Virginia Mountaineers opened their 2017 season with a 1-0 win over No. 5 Georgetown, and on Saturday night they earned their second Top-5 win after defeating the current fifth-ranked team, Penn State, 2-1.

West Virginia put away two first-half goals to take a comfortable lead into halftime. The first of those was scored in the 17th minute when some nearly flawless passing saw Michaela Abam move the ball up the left side before playing it ahead of Hannah Abraham’s run. Abraham immediately played it over to Sh’Nia Gordon, and the junior forward used the inside of her foot to send the ball into the upper right corner from 12 yards out. Freshman Lauren Segalla scored the game-winning goal 20 minutes later, her first goal as a Mountaineer.

The Nittany Lions got one back in the second half after WVU defender Vanessa Flores was whistled for a foul inside the box, resulting in a Penn State penalty kick. Midfielder Emily Ogle converted the spot kick to prevent the shutout, but a strong Mountaineer defense pulled out the win, holding the Nittany Lions to a season-low three shots on goal.

Stanford followed their 4-0 shutout of No. 10 Georgetown Friday night with a stunning 7-0 win over Navy on Sunday. The Cardinal opened up scoring in the 7th minute and never stopped, with six different players getting in on the fun. Redshirt junior Kyra Carusa scored a brace, and Civana Kuhlmann, Jaye Boissiere, Catarina Macario, Mariah Lee and Andi Sullivan all added singles.

The goal that most fans were likely excited to see was the one that came off the foot of Andi Sullivan in the 81st minute. Although the goal was scored with a beautiful strike from distance, it is more noteworthy in that it’s Sullivan’s first goal since returning from last season’s ACL tear. It was a good day for Sullivan, who many have projected to be the first overall pick in the 2018 NWSL College Draft. She played a season-high 62 minutes in the contest, tallied an assist on Lee’s goal, and rattled the crossbar with another long-range attempt earlier in the match. With the way she’s currently progressing, it won’t be long before “Sunshine Sully” is back to 100 percent.

NCAA soccer was turned upside down in just the second week of the season as five of the top six teams in the nation were upset. An off week saw only the reigning national champions, the USC Trojans, spared (and the lack of action saw them slip to the No. 7 ranking), but a 2-1 loss on Sunday to the unranked Kansas Jayhawks proved that few, if any, high-ranking teams are immune to defeat this year.

To add insult to injury, the game-winning goal was an own goal scored in the 69th minute when a back pass intended for goalkeeper Kaylie Collins took an awkward skip and rolled over the goal line for the second Jayhawk goal. The own goal doubled Kansas’ lead after sophomore Katie McClure put one away in the opening 15 minutes of the match. USC got one back late in the second half via a penalty but it was too little, too late, and the Trojans’ eight-game winning streak dating back to last season was snapped.