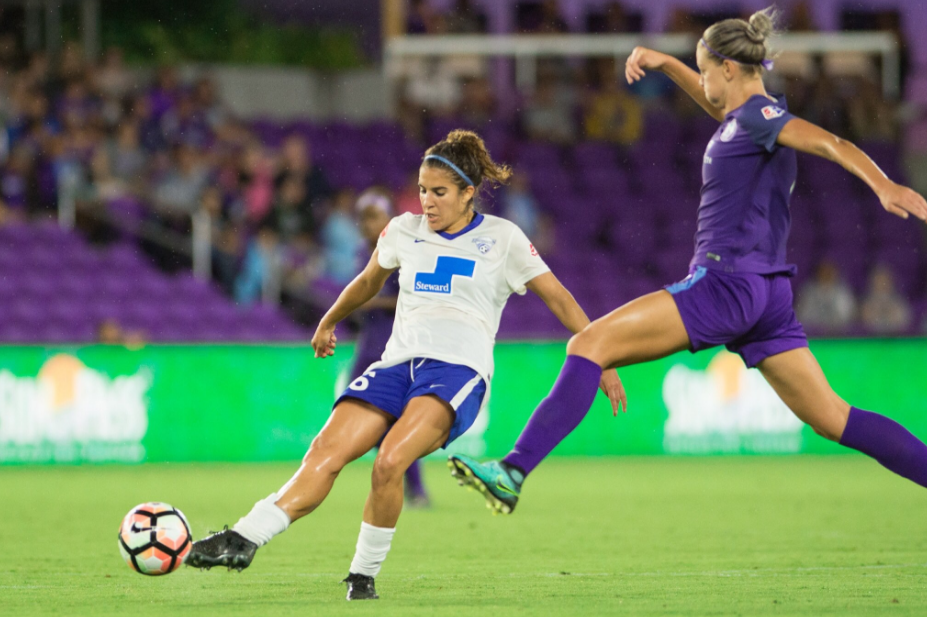 With the sure-fire tandem of Alex Morgan and Marta continuing to develop their chemistry in the second half of the NWSL season, the Orlando Pride have been unbeaten since the beginning of August. This impressive play continued as they out-classed the visiting Boston Breakers on Saturday night, emerging victorious 4-2 off of goals from Chioma Ubogagu, Marta, and a brace from Rachel Hill.

Boston came into the match with a decisively defensive set-up, utilizing a 4-4-2 formation that occasionally looked like more of a 5-4-1, resulting in a very crowded midfield. On their end, Orlando came out with a 4-4-3, giving the start up top to the rookie Hill, who seemed eager to make her mark early in the match.

Hill succeeded in doing so in the 7th minute when, after much of the play being in front of the Boston goal, Ubogagu found Morgan in the penalty area, who’s shot was saved by Abby Smith. However, Smith’s block only went as far as Hill, who put the shot home to give the hosts the 1-0 lead.

Orlando remained squarely on the front foot after the early goal, with a number of good looks from Morgan in particular, but it again was Hill who made the final difference when in the 15th minute, Morgan got in behind the Boston defense and served the ball to the rookie right in front of the Boston goal to complete an early brace, and extending the Orlando lead 2-0.

After the flurry of offensive activity to start the match, Boston found a way to possess a little bit more, and work into Orlando’s defensive end. Boston got a look at Orlando’s goal after a corner kick in the 28th minute, but Ashlyn Harris had a good head’s up play to retain the first half shutout, as the half would end with Orlando dominant, 2-0.

The second half also started with a strong showing from the hosts, with an aggressive press especially focused on Abby Smith with the ball at her feet, and Boston struggled to deal with the quick, cohesive passing from the Orlando offense. However, against the run of play, the Breakers were able to cut the deficit in half in the 49th minute, when a cross into the box ultimately found the feet of Rosie White, who was able to calmly put the shot past Harris.

Orlando wasn’t done looking for goals however, and in the 67th minute, after around 15 minutes of back and forth play, Ubogagu got an assist on the night, placing a perfectly weighted ball past the Boston defense for Marta to run up on, and the star Brazilian notched a shot out of the reach of Smith to put Orlando up 3-1. Ubogagu finished her impressive night with a goal of her own, taking on Boston defenders on her own, and getting separation in the 77th minute to set loose a well-placed, left-footed ball to the far post, beating Smith and completing an important insurance goal, raising the score-line to 4-1.

Perhaps the only thing to give the Pride pause in the midst of such a dominant performance would be their continued struggle with allowing goals late in matches, whether due to fitness issues or basic mental lapses, and it proved costly again when the Breakers were able to grab a late goal by way of the head of Julie King in the 88th minute to complete the final scoreline of 4-2. This goal didn’t end up changing the result of this particular match, but as the Pride heighten their ambitions towards the playoffs, they’re going to have to tighten up those sorts of defensive situations. As it stands, the Pride overtake the Chicago Red Stars to move solely into 3rd place in the NWSL standings, and have a realistic stake for being excited about their post-season potential. For the Breakers, their continued tenacity in tough situations (and the 72nd minute return of USWNT star Rose Lavelle from a hamstring injury) should give them some positives going forward as they look towards the end of their 2017 campaign.