NCAA Game of the Week: Stanford shuts out Georgetown, 4-0 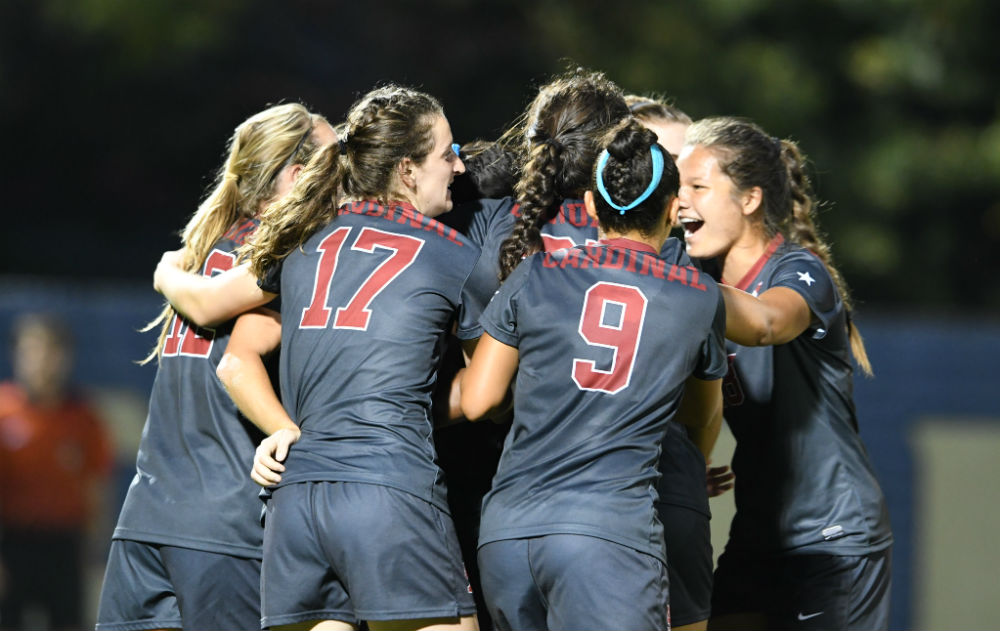 After a three-game road trip that ended with a 3-2 loss to Florida, the No. 5 Stanford Cardinal (3-1-0) returned to the Farm, where they defeated tenth-ranked Georgetown (3-2-0), 4-0. Civanna Kuhlmann scored the game-winning goal in the sixth minute, while goalkeeper Lauren Rood earned the clean sheet.

Anticipation was high surrounding Friday night’s game as it was yet another early-season Top 10 match-up leading up to conference play. Stanford was looking to bounce back after falling from the No.1 spot following their loss to then-No. 8 Florida, whereas Georgetown entered the match riding a three-game winning streak that followed their home opener loss to West Virginia.

However, the Georgetown team that took the field this afternoon barely resembled the dominant team that beat two of their last three opponents by four or more goals, and the Hoyas struggled on both sides of the ball. That may have been partly because of the heat, as 104-degree temperatures as kickoff forced hydration breaks each half. Regardless of the reason, the offense only generated enough chances to get off eight shots, but only two of those were on target and Rood was equal to the task.

Although much of the talk about Georgetown this season has been centered on Rachel Corboz, she was quiet for most of the day. That allowed Caitlin Farrell to be the top attacker on field for the Hoyas, and she registered a number of shots in the first half, but a lack of finishing and a strong defensive showing from the Cardinal prevented her from doing any damage. Farrell, like the rest of the Hoyas attack, was largely invisible in the second half.

In contrast, Stanford came out hot and struck fast. Freshman forward Civana Kuhlmann had a brilliant opportunity in the sixth minute after being on the receiving end of a textbook cross from Catarina Macario, but she skied the ball well over the target. She immediately got redemption, though, when less than a minute later she fought off a defender to get on the end of Kyra Carusa’s pass before moving towards goal. Kuhlmann angled a right-footed shot past Georgetown keeper Arielle Schechtman, who had hunkered down by the near post as the striker closed in on her target, leaving the majority of the goal open for the taking.

Following the first-half hydration break, Georgetown became much livelier as they searched for an equalizer, but the Cardinal defense was too strong, and the teams entered the locker room with Stanford leading one-nil.

Andi Sullivan entered the match at the start of the second half and played the entire 45-minute shift. Her minutes are still being limited as she works her way back up to full strength and match fitness following her ACL tear last November, but her presence in the midfield both settled and energized Stanford, and they were clearly the better team because of it. The ball spent the majority of final 45 minutes in the Cardinal’s attacking half.

It wasn’t surprising then when Stanford took off on a goal-scoring tear, putting away three goals inside of 7 minutes. Jaye Boissiere put away the first career goal in the 72nd minute to double the Cardinal’s lead, followed by a goal by Catarina Macario five minutes later. Macario’s tally was set up by Sullivan, who took her own low-rolling shot on goal, only to have Schechtman parry it away. Macario easily put the rebound past the keeper to score her fifth of the year and continue leading the team in scoring.

The final goal of the game came in the 79th minute when Macario made a perpendicular run from the near flank to the center of the field, playing the ball to Kyra Carusa inside the 18. Carusa then turned around her defender and faked a shot, causing her defender to lose a step and allowing her to move into space and fire off a shot into the near corner of the goal.

Up next for the Cardinal is another home match, this time against the Navy, on Sunday, September 3. Georgetown heads over to San Jose to take on the San Jose State Spartans, also on Sunday.