Allison’s Friday Favorites: Under the Lights and in the Dark

That’s the email that Gwendolyn Oxenham, author of Under the Lights and in the Dark: Untold Stories of Women’s Soccer, received shortly after enrolling in graduate school for creative writing. With no professional league in existence in the US at the time (WUSA had folded the same year she graduated from Duke University), Oxenham never knew if she had what it took to play professionally, a fact that constantly ate at her as she tried to make the transition from soccer, a sport she loved and wasn’t quite ready to give up, to the “real world.” But then that fateful email pinged her inbox, and Oxenham jumped at the chance to finally find out if she had what it took.

“I just had to go, and it was crazy,” she said of her experience with Santos FC. “I was hitchhiking to practice, there was a horse on our field. I had an incredible time, but it just made me wonder what the heck the women’s game is like in all these other countries if this is what it looks like in Brazil.”

That wonder, combined with her love of human interest stories, inspired her to find out.

“I knew what a story my Brazil summer was, and just whenever I watched the World Cup—I remember watching Gäelle Enganamouit and here she is, scoring a hat trick, and she’s got white-blonde lion’s mane and there are fans going crazy for her, and we know nothing about her story,” Oxenham reflected. “I didn’t know anything about any of the players on any of the teams. And that’s what soccer is for me. To me, what I’m interested in, are the stories off the field.”

So Oxenham began researching Enganamouit and, before long, realized they had a common friend in Kim DeCesare, a fellow Duke graduate who had roomed with Enganamouit while they played together in Sweden. DeCesare connected the two, and that got the ball rolling for what turned into Oxenham’s newest book, Under the Lights and in the Dark. 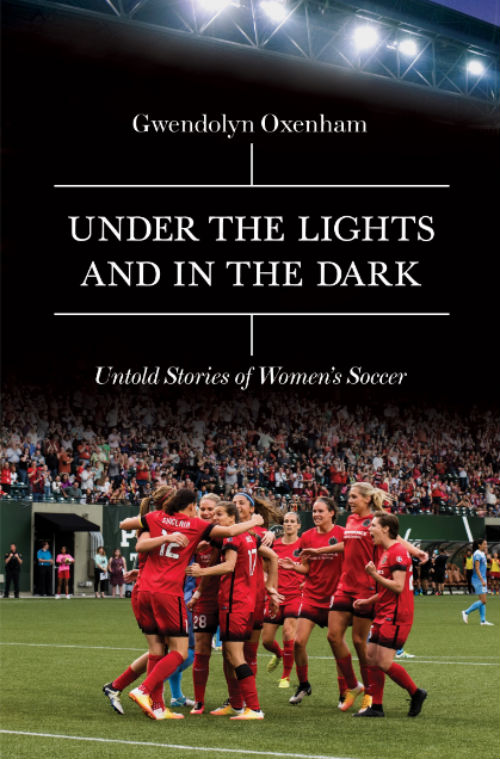 “Those are the two extremes of experience,” Oxenham said of the title. “There’s Portland, where they do get to experience being under the lights, but there’s a whole lot of other players who are playing in the dark, in the shadows, for nothing even though no one cares.”

As the title suggests, the book chronicles the stories of women soccer players from around the world, from the stadium lights over a sold out crowd at Providence Park to the darkness of a night-time kickaround in a Danish refugee camp. While some players had to fight for their paychecks, others were making hundreds every night playing in cutthroat pickup games while still others were trained in elite programs housed on the same grounds as castles. For many soccer was an escape from the darkness around them, while others used it to escape the darkness within themselves. No matter the player—Marta, Amy Rodriguez, Josephine Chukwunonye or Tabea Kemme—all have struggled to live their dreams, more so than their male counterparts have ever had to.

“I think the women’s game has more to offer than anything else because it is people who are just playing because they love it despite everything that is thrown at them, so I just wanted to go see what was out there. I didn’t know what I was going to find, and I was kind of stunned by what I did find.”

On the surface the book may resemble a quilt, one large work consisting of individual pieces arranged to tell one more-encompassing story (Oxenham even describes some chapters as mosaics). But when really examined up close, you see that the book, just like women’s soccer itself, is actually a tapestry of interwoven stories, all connected by different color threads to create one big, stunning masterpiece. Although the players whose stories are included hail from all over the world, there’s a common bond that ties their stories together. And like a tapestry, Oxenham weaves the beauty of her storytelling with the bruteness of a slide tackle to make the book a must-read for any fan of the women’s game.

Under the Lights and in the Dark: Untold Stories of Women’s Soccer is available to purchase today, September 1, in both electronic and hardcover formats.

It’s been awhile since I included multiple items in my Friday Favorites, but I felt that it was necessary in the wake of the devastation caused by Hurricane Harvey on Houston and the surrounding areas of Texas. The NWSL was directly affected since Houston is home of the Dash, and the team has since relocated to Frisco for this weekend’s match against the Seattle Reign. All proceeds from ticket sales to this weekend’s Dash game will be donated to the American Red Cross Hurricane Harvey Relief Fund, while evacuees from the storm will be admitted free of charge. But that’s not the only way the NWSL is giving back to those affected by Harvey.

#HoustonStrong: Here's a resource guide for ways you can help after Hurricane Harvey: https://t.co/gxUmMBWGaJ pic.twitter.com/5uANV5bN6g

Anyone interested in donating to the Hurricane Harvey relief funds may do so through any of the links above.

Allison’s Friday Favorites will feature positive, encouraging or otherwise uplifting stories from around the world of WoSo every week. See anything that should be included? Feel free to tweet them to me (@allibecc). All of the columns can be found here.