The Lowdown: The playoff push is on!

Are Christen Press and the Red Stars heading for a collapse? Or back to the playoffs? (Photo Copyright Linehan Photography for The Equalizer)

The playoff push is here. Wednesday night’s Courage-Spirit match was supposed to leave all 10 teams with four games to play over the final four weekends. Unfortunately, the Dash and Courage had to scrap their game last Sunday due to Hurricane Harvey, so that will have to be made up at some point along the way. In the meantime, here’s a look at how all 10 teams are standing including some early thoughts on the Morgan Brian-for-Kristie Mewis trade.

The Courage nearly clinched a playoff berth without playing last weekend, but Sky Blue’s win over the Breakers kept the clinching at bay another week. They can now clinch by beating the Spirit on Wednesday and can wrap up a home semifinal if they can beat both the Spirit on Wednesday and the Red Stars on Sunday. A home semifinal is also theirs if they win once and both the Red Stars and Pride lose, and a playoff spot is theirs if Sky Blue lose.

On the field, the Courage have been as solid and free of drama as any team in NWSL. They are 4-0-0 without conceding a goal since the last FIFA break. About the only thing of concern is that they have six matches left, which could be hell on the legs heading into an almost certain playoff match.

The Thorns are rolling. Saturday’s more-lopsided-than-the-score-indicated win over the Reign must have been extra satisfying for three reasons. They won at Memorial Stadium for the first time, and in doing so edged their Pacific Northwest rivals to become the first team to win 50 regular season matches—the Reign remain stuck on 49. The three points also gave the Thorns some insulation as one of the top two teams on the table.

The Thorns have been at their best since Katherine Reynolds returned to fill out the backline and Christine Sinclair dropped a little deeper to pull strings for the highest strikers. The result is that, in the short term anyway, Allie Long has lost her starting role. That’s less a condemnation of Long as it is an acknowledgment that Long, Lindsay Horan, and Amandine Henry together in the midfield might be too much of the same thing.

The Thorns can clinch a playoff berth this weekend with a win and a Sky Blue loss or draw. A Thorns draw plus a Sky Blue loss won’t clinch it, but it would leave only a gargantuan collapse in the goal difference department compared to Sky Blue to miss out.

The Red Stars snapped a losing streak by winning at their personal house of horrors, the Maryland SoccerPlex, and got a goal from newest acquisition Kristie Mewis along the way. And then just as this column was about to be unleashed, they went and traded Mewis to Houston for Morgan Brian. My hot take is that I don’t understand this one. Brian has been tied to a move to Lyon in 2018 but, more importantly, has been hampered by injury for the better part of the last two seasons and most recently went to California to treat her balky hamstring under the supervision of US Soccer doctors. If she’s healthy, she could (should?) shake things up in the Red Stars’ midfield. No clue how this will work but circle the Red Stars as the team to watch down the stretch—especially if Brian is on the pitch.

No clinching scenarios this weekend for the Red Stars, whose rosey path to the playoffs was complicated by three home losses in nine days. They’re back at Toyota Park this weekend to host the league-leading Courage.

GIVE. These are our people, this is our city, this is home. Follow the link, give and share. #HoustonStrong https://t.co/MDJC5LQof4

Is it possible the Pride are now the best team in NWSL? If not the best, are they the most dangerous? The best is probably a stretch, but taking 13 of 15 points in August has them on the right side of the playoff bubble and with plenty of momentum for the home stretch. As for most dangerous, the Alex Morgan-Marta tandem is quickly becoming one that defenses do not have an answer for.

In all likelihood, the hot streak will end at some point, and we’ll find out if the points the Pride carelessly let go of in the first half of the season will be too much to overcome. They also face the Thorns in a nationally televised match on September 23, four days after Marta, Camila, Monica, Stephanie Catley and Alanna Kennedy play an international friendly in Australia.

It has been a strange season for Sky Blue, and if your WoSo existence dates back to WPS you know that the championship season of 2009 was far weirder than this one. So do they have a magical run in them or not? Of their final four games, they have one each against FC Kansas City, Boston, and Washington, all bottom four teams at the moment. The caveat is they have played the Spirit twice and lost both times, conceding four goals in each. Another downer for Sky Blue is that they cannot win a tiebreaker against either the Pride or Red Stars, so while they only need to pass one, their 3-point deficit to both is more like 3.5 points.

Sam Kerr’s exploits have been well documented on this site, but it is fair to ask why a team with the best player in the league (world?) is only .500. It’s really because of the defense. Last weekend’s clean sheet was a good step, but the Breakers are averaging less than a goal per game and have won once on the road in three years. Sky Blue will probably need some luck to get in, but that will only matter if the defense gets some late-season consistency. Prior to the shutout, they had allowed 22 goals across six matches.

The Reign have become one of those teams that everyone always thinks is dangerous even when all signs say otherwise. And I think it might be time to admit the Reign are not very good right now. It has been a precipitous decline from the first of July when they overwhelmed the Thorns at Memorial Stadium and looked like legitimate contenders. But Megan Rapinoe has not played since the Tournament of Nations and might not again this season, Jessica Fishlock is not the dynamic player the Reign have built so much of their success around, and the defense has major issues.

Following last weekend’s loss to the Thorns, head coach Laura Harvey opined that it would take all 12 points—maybe 10—to sneak into the playoffs. Can they get them? The Dash, Pride, FC Kansas City, and Spirit will have something to say about it. But the defense, starting with Haley Kopmeyer’s distribution issues, is not playing at a level that would make anyone think they can navigate these last four with 10 points.

After a three-game winning streak had the Blues on the cusp of being dangerous, they are now a home loss to Sky Blue (or a draw plus a Red Stars win and Pride win or draw) away from being out for the second season in row. Based on preseason expectations and the inexplicable defensive swoon that led to a nine-match winless streak it will be a disappointment not to get back to the playoffs.

On the positive side, players like Lo’eau LaBonta, Maegan Kelly, and Christina Gibbons have developed nicely, and the team never capitulated even when it seemed like things would never get better. If they can keep the center backs and goalkeeper in place for 2018, they may not be more than a piece or two away from being back in the top four.

The Dash are slipping toward another season missing the playoffs, and now their city is literally underwater in the wake of Hurricane Harvey and its devastating rain and flooding. Last weekend’s match was postponed. This weekend’s match has been moved to the Dallas area and all proceeds from the match will be donated to the relief effort. 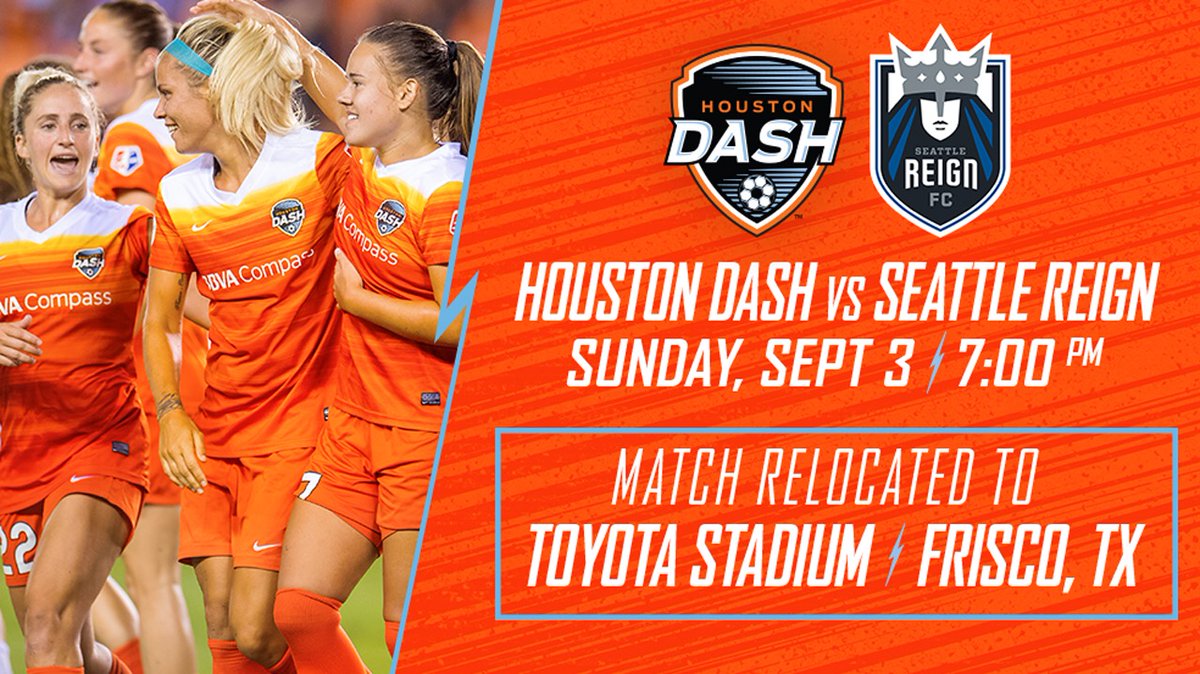 The Houston Dash’s home match against the Seattle Reign has been moved to Toyota Stadium in Frisco, Texas. (graphic courtesy Houston Dash)

The weather did not stop the front office from making a splash though. Morgan Brian is gone, traded to Chicago for Kristie Mewis. It will be some time before this one can be sorted out, but breaking from Brian is a major statement. Mewis at least represents a healthy body for the rest of the season. With a new regime likely for 2018, any read on how this move impacts the Dash’s future is blurry at best.

Unless the Breakers win three of their last four, the two-year tenure of Matt Beard will account for fewer points in the same number of games as the two seasons under Tom Durkin. There have certainly been steps forward. Rose Lavelle, when healthy, appears to be good enough to pull strings for an NWSL midfield. Morgan Andrews is a solid bet to improve in her second season when college studies on the opposite coast won’t be in the way. The goalkeeper position looks to be locked up after the club spent draft picks there two years in a row.

On the other side, too much losing can sink into the culture and stay there, and it is apparent at this point the Breakers need a way out of the cycle. They have way more what if games over the years than how-did-we-do-that results. And 16 goals in 20 games—even with Lavelle not there for most of them—is not good enough.

It has not been a very good season for the Spirit. Arielle Ship became their sixth—yes sixth!—player to go out in the lineup with a torn ACL since last September, and the last place standing won’t make their supporters feel any better about what looked to be an unnecessary rebuild.

That doesn’t mean all is lost on the season though. Meggie Dougherty Howard has been a find in midfield. The club coaxed Mallory Pugh to accept a U.S. Soccer contract and join the club. Havana Solaun has enjoyed her most productive season after a year lost to injury and another buried on the bench in Seattle. The Spirit now have two first round picks in 2018, and while being at the bottom is a far cry from being within spitting distance of both trophies last year, 2017 may wind up being looked back on as the start of something excellent.