Tobin Heath was added to the Thorns’ active roster on Monday and returned to training with the team on Tuesday. (Photo Copyright Meg Linehan for The Equalizer)

The Portland Thorns announced Monday night that they had moved midfielder Tobin Heath from the 45-day disabled list to the active roster. To make room for Heath on the already maxed-out roster, the Thorns and Meleana Shim mutually agreed for the midfielder to be waived.

The move was an expected one, as The Oregonian’s Jamie Goldberg had previously reported that head coach Mark Parsons planned to activate Heath, sidelined by a lingering back injury for the entire 2017 NWSL season thus far, ahead of the league’s roster freeze date. Originally it was said that the USWNT star would begin training with the Thorns this week, and the team confirmed her return to training with pictures posted on their social media accounts today. Parsons suggested that the plan was for Heath to make her first appearance during the postseason, although now it’s being reported that she may take the field during the regular season.

NWSL roster rules only allow a maximum of 20 active players at a time, which the Thorns had at the time of Heath’s activation. As a result, Shim and the Thorns agreed upon her leaving the club. In a press release from the Thorns, it was said that Shim had an opportunity to play overseas and that, combined with her lack of playing time this season (she’s totaled 209 minutes over 6 games played), were the reasons behind the decision for her departure. On Tuesday, it was announced that Shim had signed with Sweden club Växjö DFF.

Shim is one of a handful of Thorns who have been with the team since the NWSL’s inception in 2013. The Hawaii native joined the team after an open tryout and went on to make 74 appearances in a Thorns jersey, the fourth most in club history. She helped Portland win the inaugural NWSL Championship in 2013 and the Shield in 2016. She has also tallied nine goals and nine assists in her five seasons there.

Ada Hegerberg has announced that she is stepping away from Norway’s national team indefinitely. (Getty Images)

Ada Hegerberg announced today that she was taking a break competing internationally with Norway for an indefinite period of time. She will continue playing with her club team, Olympique Lyonnais.

In a statement posted to her Instagram account, the 22-year old forward explained her decision, saying, “The decision to take a break from the national team has been difficult, but it is well-considered. The decision is not only a consequence of this year’s EM (European Championship), but is based on my experience with the national teams over a long period of time.”

Hegerberg, named BBC’s 2017 Women’s Footballer of the Year and UEFA’s 2016 Best Player in Europe, has been a fixture of Norway’s lineup in recent years, including in this summer’s European Championship. Picked by many to be a dark horse to usurp Germany’s 20-plus-year reign as continental championships, Norway had quite the opposite performance, going scoreless throughout the tournament to be eliminated in the group stage.

Although she was critical of Norway coach Martin Sjögren following a EURO match, Hegerberg went on to specify that the reason for her leave of absence went beyond just his coaching.

“It is also important to emphasize that the reasoning is largely outside Sjögren’s coach responsibility. In my opinion, the national team must achieve the goals and achievements that the national team management has taken, in several areas, both in the planning, implementation and follow-up. In addition, there is a lot to go on in terms of communication and dialogue.”

As for Sjögren, he said he was caught off-guard by Hegerberg’s decision, which he was reportedly made aware of several days ago: “This came like lightning from clear skies, and I regret that she wants a break from the national team. Ada is an important player for us, and of course we had expected that a player of her caliber had gone ahead and shown way to revive the weak EM efforts.”

Sjögren announced his 18-player squad for Norway’s upcoming World Cup qualifiers against Northern Ireland and Slovakia. Unsurprisingly, Ada Hegerberg was not included on the roster, but more surprisingly neither was her sister Andrine Hegerberg. Andrine Hegerberg, like Ada, was a part of the EURO squad, although she only made one start in one tournament appearance.

Also excluded from the roster was North Carolina Courage defender Nora Holstad, who later took to social media to announce her retirement from international competition. A translation of Holstad’s statement says that her decision is unrelated to Hegerberg’s and is so that she may better focus on her club career. 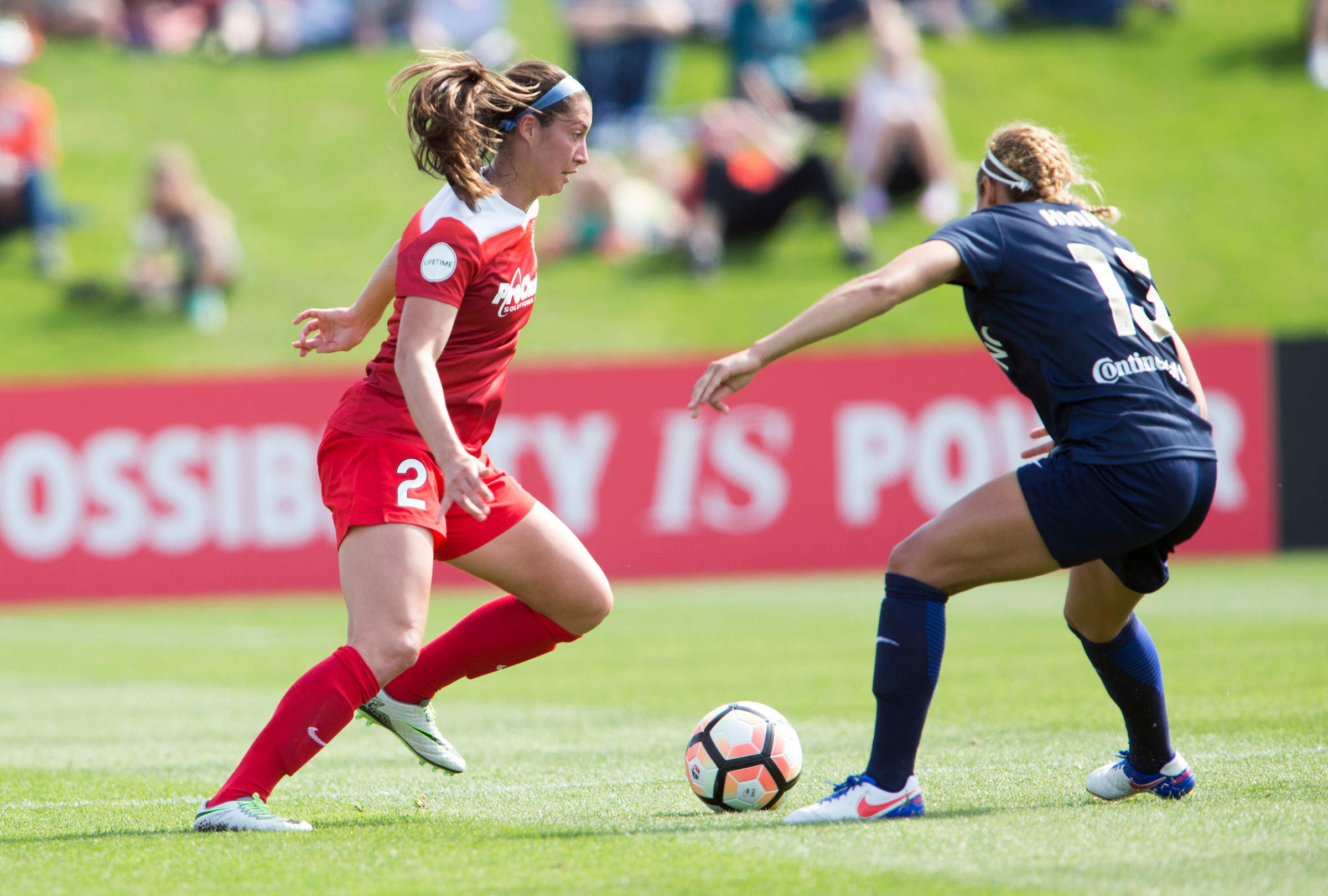 Arielle Ship will miss the rest of her rookie season after tearing her ACL. (photo courtesy Washington Spirit)

The Washington Spirit announced today that rookie forward Arielle Ship tore her right ACL in Saturday night’s home loss to Chicago. Ship was stretchered off the field in the 68th minute after colliding near the sideline with Red Stars midfielder Alyssa Mautz, who received a yellow card on the play.

“Injuries are always awful, especially ones that are generated by contact,” head coach Jim Gabarra said in the team’s statement. “I felt like that was Ari’s best game of the season so far, so it’s really disappointing and sad that she’ll miss the rest of the season. We’ll provide her with the support and quality medical resources to get her back as strong as ever.”

Saturday’s match was Ship’s ninth start over 14 appearances for the club. She has registered one goal and two assists on the season, both of which came in the Spirit’s 4-1 road win against Sky Blue FC. For that performance, Ship was voted the NWSL Player of the Week by the NWSL Media Association.

The injury marks the sixth such ACL tear for the Spirit over two seasons. Veteran midfielder Joanna Lohman tore her ACL in the Spirit’s 2017 season opener against the North Carolina Courage, and Danish international Line Sigvardsen Jensen tore her ACL while competing in the European Championship. Cali Farquharson and defender Caprice Dydasco only recently returned to the field after suffering ACL tears last season. Goalkeeper Kelsey Wys tore her ACL while playing in the W-League in Australia during the NWSL offseason and on Saturday was available (although listed as doubtful on the injury report) for the Spirit for the first time this season.

The Houston Dash have claimed former Portland Thorns defender Meghan Cox off waivers, the team announced on Tuesday. The undrafted rookie was waived by her former club last week to make room on the roster for Savannah Jordan, who was added to the active roster following a stint on the 45-day disabled list. The University of Virginia product signed with the Thorns on April 14 and logged 262 minutes over nine appearances for the team over the season.

The Orlando Pride also announced today that they had signed midfielders Jocelyn “Jo” Blankenship and Jordan O’Brien ahead of Tuesday’s NWSL roster freeze date. O’Brien’s signing is pending the receipt of her International Transfer Certificate (ITC). Both players were added as training players midway through the 2016 season. Blankenship joined the Pride after spending 2016 preseason with the Boston Breakers, while O’Brien joined the team following stints with Iceland’s KR Reykjavik and Sweden’s QBIK.

“We’re really happy to reward Jo and Jordan after they’ve both been training in our environment for the past two seasons. They both have great attitudes and have been great additions to our team at training,” Pride head coach Tom Sermanni said in the team’s press release. “They are both very technical, talented players, and I’m really delighted to be able to put them on contract and (have them) join us in our playoff push.”

Olympique Lyonnais announced today that they signed Shanice van de Sanden to a three-year contract. The former Liverpool Ladies forward, known for her speed along the Netherland’s right flank, is coming off an impressive performance for her home nation during their run to capture the 2017 European Championship title on home soil.

“I’m really happy, it’s a dream come true. OL is one of the best women’s soccer teams in the world and I look forward to meeting the players, being able to train and play with them,” Van de Sanden said in a translated statement from the team. “I have a lot of goals, I would like to win the championship and the Champions League. I will never forget this August, and on the 6th I won the Euro with my country and on the 29th I sign with this fantastic club that is Olympique Lyonnais. I am very proud.”

The announcement of Van de Sanden’s signing comes just days after Lyon owner Jean-Michel Aulas told reporters he was in negotiations with another USWNT star, whose signing he hoped to announce sometime this week. He also said that it did not appear as though Alex Morgan would be exercising the option to extend her contract with the French powerhouse.

Westfield W-League side Melbourne Victory announced early Tuesday that they signed former Orlando Pride defender Laura Alleway to a two-year contract. The contract marks the second stint with the team for the Matilda, as she was previously a part of the team’s inaugural squad back in 2008.

“She’s a really dominant central defender who wins the ball and uses it really well,” head coach Jeff Hopkins said about the defender. “One of the things we recognized last year was we needed someone in that position to really be dominant and organize people around the place.”

Hopkins previously coached Alleway while the two were with the Brisbane Roar during its 2010/2011 W-League Championship season. The defender also won championships over the last two seasons with reigning champions Melbourne City.

“Once I knew she was maybe available, I jumped in as soon as I could to lock her down,” Hopkins added. “I know Laura’s qualities and she was out playing in Orlando. I’ve been watching a lot of the US games on a weekly basis and also the national teams with the Matildas. We’ll be bringing a lot of experience in around her as well.”

Alleway was waived by the Orlando Pride this past July after nine starts in 11 appearances in two season with the club. Her departure from the team came as little surprise since she had not seen time on the field since April 29. Alleway was part of the Pride’s inaugural 2016 squad but returned from the Olympics carrying an injury and saw little playing time for the club after that.