NCAA Weekend Recap: Top of rankings rife with defeat in weekend of upsets 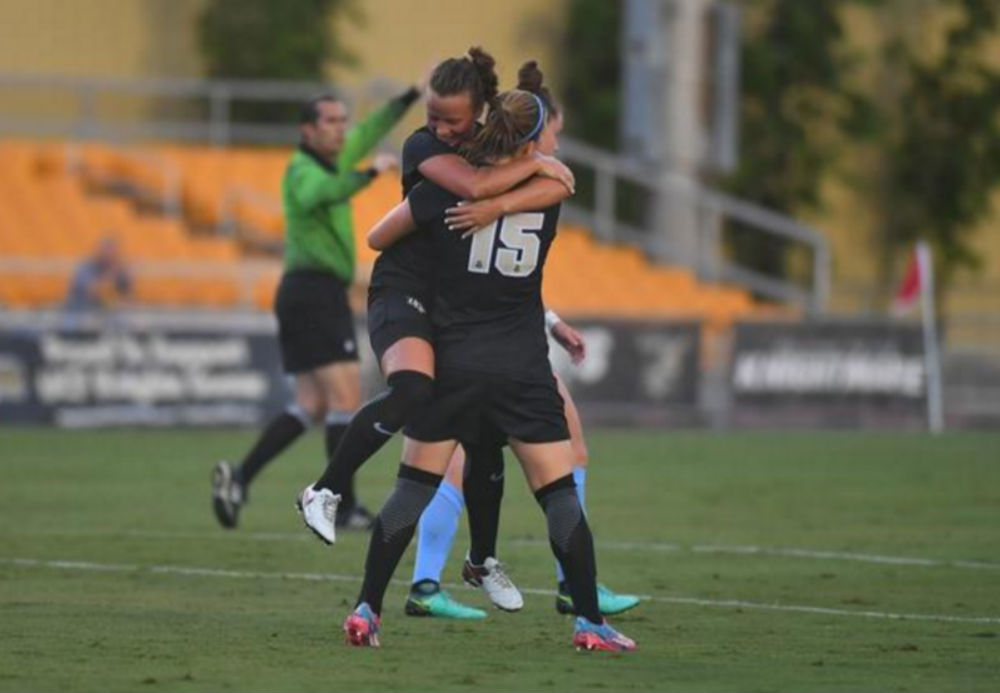 As with all sports, the “any given Sunday” rule is very much a real thing in women’s soccer, and it’s not unusual to see upsets scattered throughout the season. What is less common, though, is for the second weekend of the NCAA season to be full of upsets at the top of the rankings, but that’s exactly what happened. Over the course of four days, five of the top six teams in the nation fell, three to unranked opponents and three in double overtime. West Virginia, sharing the No. 1 spot with Stanford, fell in their home opener on Thursday night, setting off the ripple effect that would see all of the top contenders save USC (who were off this weekend) defeated. Here’s a look back at each of the weekend’s major upsets.

After defeating Georgetown on the road to start off their 2017 campaign, the West Virginia Mountaineers returned to Dick Dlesk Stadium for their season opener, where they ultimately fell to the 10th-ranked Virginia Cavaliers, 2-1, in double overtime.

A strong defensive battle limited each team to just one shot one goal in the opening half, but both keepers made the saves to keep the game scoreless until midway through the second half when Taylor Ziemer broke the deadlock for the Cavaliers. As a long ball was played in, Alissa Gorzak broke through the WVU defense with her run and gathered the ball before sending it across to Ziemer at the top of the box. Ziemer made a move around her defender and took the shot, putting the visitors on the board in the 68th minute. The Mountaineers equalized 10 minutes later when Bianca St. Georges sent in a free kick towards the left post that Alli Magaletta redirected just inside the right post with her head.

Tied up with one goal apiece, the game was sent into overtime. The stalemate was finally broken in the second overtime period when a foul on the Cavaliers resulted in a free kick within striking distance. The free kick was played in and was loose in the scrum in front of goal before Montana Sutton tapped the ball over to Megan Reid, who slipped it past WVU’s keeper to give the Cavaliers the upset over the top-ranked Mountaineers.

West Virginia (2-1-0) bounced back on Sunday with a 3-0 routing of Duquesne, while Virginia (3-0-0) returned home for a 2-0 win over Liberty to remain undefeated on the season thus far.

The unranked Wake Forest Demon Deacons defeated the third-ranked South Carolina Gamecocks, 3-2, on Thursday night for one of the biggest upsets of the weekend and the Gamecocks’ first loss of the season. The upset is the first time since September 20, 2012, that the Deacs have defeated a Top 5 opponent.

Wake Forest got on the board first when senior midfielder Maddie Huster (younger sister of the Washington Spirit’s Tori Huster) converted a penalty in the third minute of the contest. South Carolina’s Savannah McCaskill, a recent staple on the U.S. U-23 national team and recent addition to the MAC Hermann Trophy watch list, bagged a first-half brace to give the Gamecocks a 2-1 lead at the half.

South Carolina were unable to hold on to the lead though as junior Bayley Feist pulled the Deacs even in the 51st minute when she headed in a corner kick taken by Huster. Freshman Hannah Betfort put away the game winner in the 62nd minute for her team-leading third goal on the season. The defense held on and did the rest, while senior goalkeeper Lindsey Preston finished the night with three saves to preserve the win.

Both teams followed the upset with 3-0 wins on Sunday, as Wake Forest (4-0-0) defeated Charlotte to stay perfect on the season while South Carolina (3-1-0) returned home to defeat High Point.

UCF gets first win over UNC in double overtime

We had it all in a 2-1 win over No. 4 North Carolina. #ChargeOn | #BestIsOurStandard pic.twitter.com/kEQ1wAf48Q

Friday night’s competition opened with the No. 8 Florida Gators upsetting the co-No. 1 team in the nation, Stanford, but that was by far the last, or most surprising, upset of the night. Despite North Carolina taking a very early lead, Central Florida sent the game into double overtime before senior Christine Chreighton scored in the 105th minute to hand UCF their first win in 22 meetings against the Tar Heels.

When the game kicked off, it looked to be the typical powerhouse-versus-unranked-opponent match as the Tar Heels got on the board in the third minute when junior Dorian Bailey sent in a shot from over 20 yards out, putting the ball in the lower left corner. UCF was quick to equalize though, as freshman forward Dina Orschmann, in her first start for the team, sent the rebound from a blocked shot past UNC keeper Samantha Leshnak to tie the score.

UNC thought they had retaken the lead in the 82nd minute, but the offside flag negated the goal and sent the game into overtime. The game was finally decided midway through the second overtime period when redshirt senior Kayla Adamek tipped the ball to Chreighton, who sent the ball past a Tar Heel defender and in for the game-winning golden goal.

Not only was the win the first for UCF (2-1-0) over North Carolina (1-1-0), but it was also the first time a former Tar Heel defeated Anson Dorrance as a head coach. Tiffany Roberts Sahaydak, Knights’ head coach, was an All-American midfielder under Dorrance at UNC from 1995-1998.

No. 6 FSU falls to unranked Alabama on the road

Rounding out the weekend of upsets was No. 6 Florida State, who lost on the road to unranked Alabama, 2-0, on Sunday afternoon. The Seminoles entered the game undefeated following a 4-2 road win over Samford on Thursday night, while Alabama was coming off a 2-1 overtime loss to USF.

The match on Sunday was an extremely hard-fought, physical battle between the two teams, and Alabama was the dominant team for much of the match. In the opening half, the Crimson Tide outshot the ‘Noles 9-3 but had nothing to show for it as redshirt senior goalkeeper Cassie Miller was up for the task, tallying five saves in the first 45 minutes.

Taylor Morgan put Alabama on the board in the 55th minute when Casey Wertz was on the receiving end of a through ball down the left side of the field. Wertz played the ball back to Morgan at the top of the box, and the freshman midfielder one-timed the shot past Miller to the lone goal of the contest. The win was Alabama’s (3-1-0) first ever over FSU (3-1-0) and their first over a Top 10 opponent in program history.