Lauletta: Thoughts from Sky Blue’s 1-0 win over the Breakers 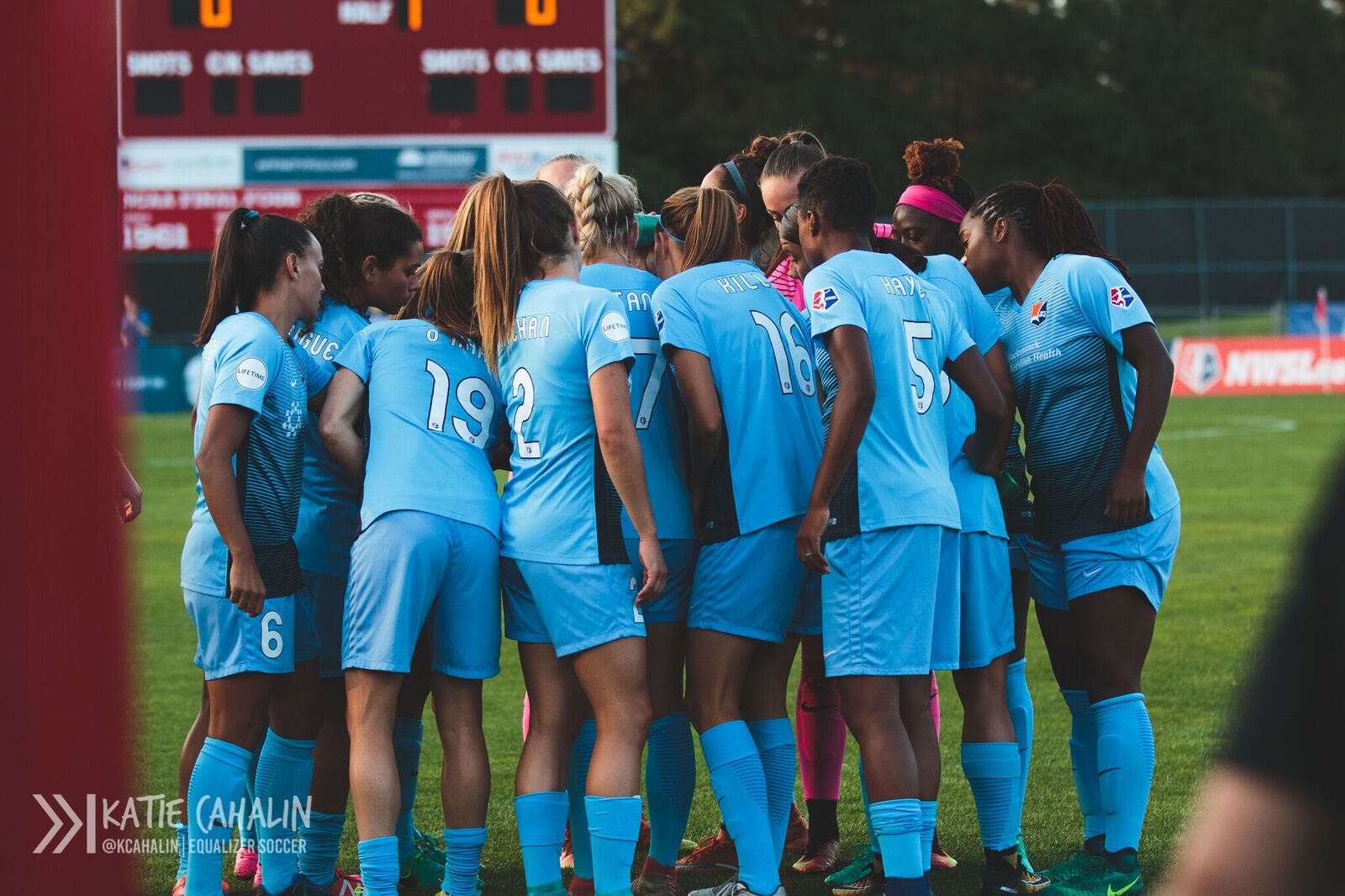 Sky Blue’s 1-0 win over the Boston Breakers on Saturday wasn’t filled with hat tricks or comeback drama like so many other matches at Yurcak Field this season. What it was was a return to normalcy for Sky Blue in the club’s second week following the departures of Christy Holly and Christie Pearce. It was also more of the same for the Breakers, whose season long ago fell apart but who saw their playoff hopes officially extinguished with the loss. Here are three observations from the evening.

Sky Blue gets a clean sheet?

Saturday was Sky Blue FC’s first shutout since July 1 in North Carolina, but that was only the tip of the iceberg. In the six games since the team has conceded a total of 22 goals and had trailed by at least two goals in all six. Only some otherworldly magic from Sam Kerr salvaged them enough points during that streak to stay in touch with the playoff chase.

“We haven’t done anything specific with the back line. We’ve done some things specific to the whole 11 unit,” gameday coach Dave Hodgson said. “Our lines were closer together. Our teammates have each other’s back. It’s mentality. These girls know how to defend. They know good shape. They know crap shape…And you have to put a body on somebody. You can’t argue with the hustle we’ve been giving all season, but once you get there you have to put a body on someone, put a tackle on someone. It was nice to get a shutout.”

It was not a perfect performance by any means, and it should be noted that the Breakers are the only NWSL club that has scored fewer goals than it has played games. But better possession, better shape, and better commitment all contributed to keeping the Breakers off the scoreboard. The highlight though, was Kelley O’Hara’s perfectly timed toe poke in the box to keep Adriana Leon from getting off a shot.

“Her instructions going on were that our back four are fatigued,” Hodgson said. “They need a leader in there. They need someone who’s going to get them out of jail because once in the next 20 minutes or whatever it was.” O’Hara actually played 31 minutes, entering as a sub in her first action since being injured during Tournament of Nations.

In one of the few times the Breakers got behind the Sky Blue defense, Katie Stengel put Leon through on a counter, and it looked as though Leon would get off a good shot. But O’Hara, dragged over from the right, stayed tight on Stengel’s flank before making the tackle of the night.

“It was amazing,” Sheridan said. “I saw the ball coming through, I saw Dri coming at me. I started to go for her and all of a sudden I (saw) this flash of yellow coming out of the corner of my eye. I was like, ‘I’m going to stay and just block and get big.’ You have to trust your players as soon as you see them. And I trust my backline.”

The only rookie to play every minute this NWSL season and playing behind a backline absent an overwhelming majority of its experience since Pearce left, Sheridan said the team made a decision in training during the week that they were done falling behind and digging themselves out of holes.

“It wasn’t just me. It wasn’t just one player,” Sheridan said. “Everybody came together and decided it wasn’t going to happen before. Ever since the beginning of the week, you’ve seen every player step up and take on a role that they didn’t necessarily take on before. And it’s been incredible.”

Sky Blue stayed 3 points behind the Red Stars and Pride, both of whom won on Saturday. The bad news is that Sky Blue can’t win a tiebreaker scenario against either. The good news is, they only have to pass one of them to get inside the top four.

There are four games to go and the focus around Yurcak Field is clearly figuring out a way to get into the playoffs. The backline will have to continue to keep goals out of the net for that to happen.

On the flipside, Matt Beard was frustrated

On the Boston side, where the loss officially puts the Breakers out of the playoffs yet again, the main word on the tip of head coach Matt Beard’s tongue was frustrated.

“Super frustrated because I thought we were the better team,” Beard said. “(We) created the better chances over the course of the game.”

Beard struck a similar chord after last season’s visit to Yurcak, also a 1-0 loss. True or not, reality is that the Breakers have won only six of the 40 games Beard has coached, and they are a perfect five-for-five missing the playoffs since the launch of NWSL in 2013. For comparison’s sake, Major League Soccer has played 21 full seasons with varying degrees of ease with which teams get into the playoffs and has seen only two streaks of futility as long as five years.

“I’m sure not everyone is giving the same answers, but it’s not fun to lose,” Morgan Andrews said. “It’s not something that we would like to continue. Of course we need to take accountability for our mistakes and fix them and make up for them during the 90 minutes. Because there is nothing you can do once the game is over.”

Andrews came off the bench in her first match since returning to finish classes at USC. She lost some credits when she transferred from Notre Dame and, in order to keep her scholarship, needed to complete her degree in broadcast and digital journalism this semester. She spent four days in California last week and returned to Boston on a Thursday night red-eye. 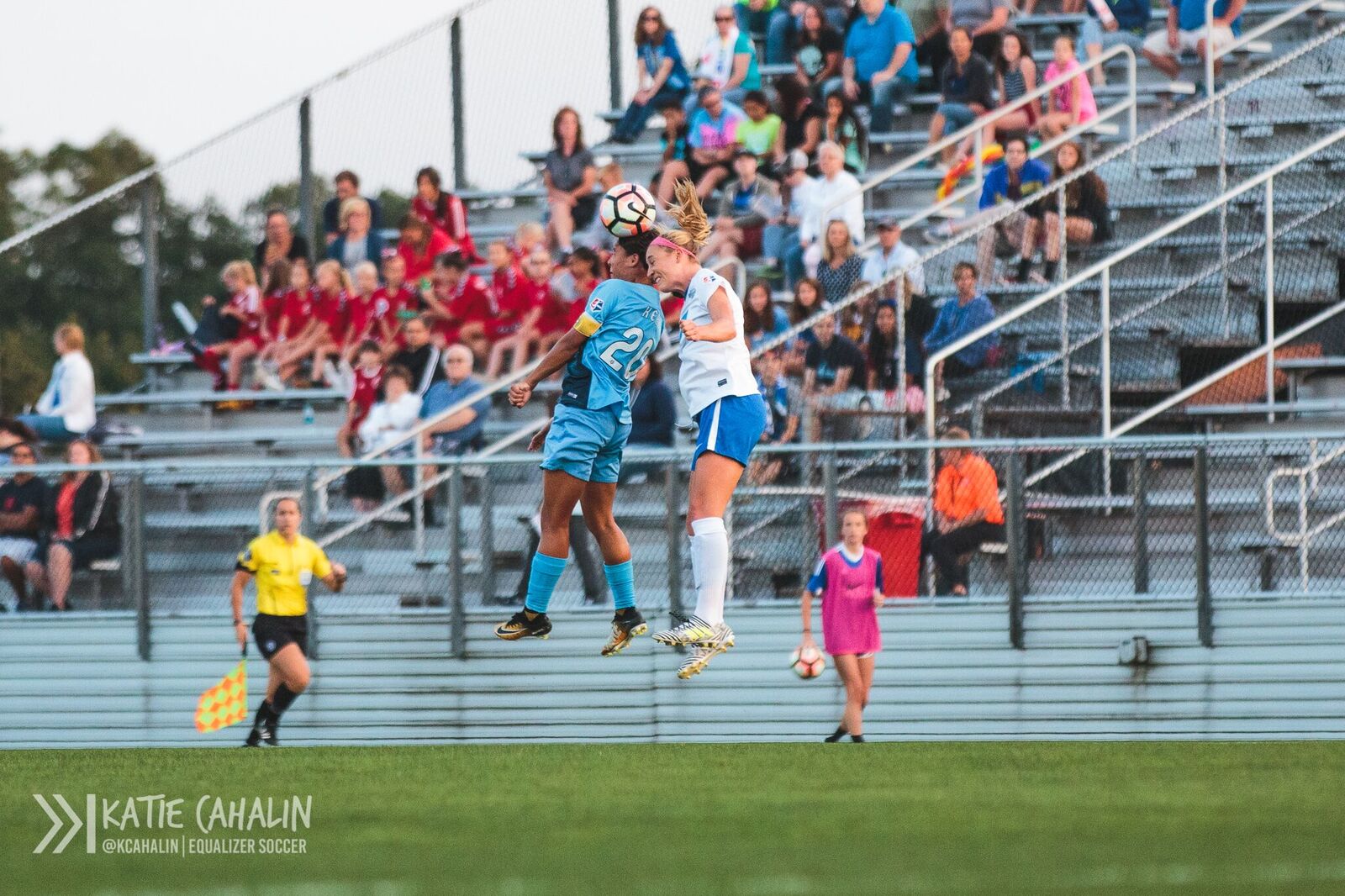 Andrews was one of four first round picks the Breakers made in January in an attempt to overhaul the club. Another one, first overall selection Rose Lavelle, was back with the team Saturday but was never going to be used. Beard hopes she will be available off the bench for next weekend’s trip to Orlando.

“Obviously the first thing to do is to build a competitive roster, and I think we’ve done that,” Beard, who started his two other first round picks, Midge Purce and Ifeoma Onumonu, on Saturday, said. “I think in every game this year, we’ve been in most games. If you look tonight, Sky Blue were hanging on toward the end.”

Beard went on to rattle off a series of matches where he thought the Breakers could have, or should have, done better than what they did. Injuries too, have not done the club any favors.

“There were games we should have picked up more than a point, but we didn’t,” he said. “You take Rose Lavelle out of any team, it’s going to hurt. You take probably the best 10 in the league missing for three-quarters of the season, it has just killed us. We haven’t had the same back four since (Week 6). That just sums up some of the luck we’ve had with regards to injuries.

“I don’t think we’re a million miles away. We can take some confidence, and we can take some belief from the competitiveness we’ve built. Obviously we’ll look to improve again in the offseason with regards to the squad.”

Sam Kerr has been so spectacular at certain times this season that it almost seems like a non-story when she scores one goal in a game, especially one so early on and aided by goalkeeper error. This particular goal tied the NWSL record for most in a season, 16. Kim Little did that three years ago. Kerr has four games left to try and break the mark.

Asked if she was in awe of her own season, Kerr looked to the ground and said, “I think that would be weird if I said yes.”

If she is not in awe, she might be the only one. She called Saturday’s goal in which she beat an overly aggressive Abby Smith to a long ball and essentially tapped it toward an open goal one of the easiest she has ever scored. But perhaps the most impressive part about her 16 goals is that few if any of them have been the same.

“I’m just happy to help the team score goals,” she added. “I don’t really care who scores. All I’m looking at right now is one-nil at home, and that feels great.”

It appears that Kerr, who scored four times for Australia at the Tournament of Nations, will have to let others do the talking for her.