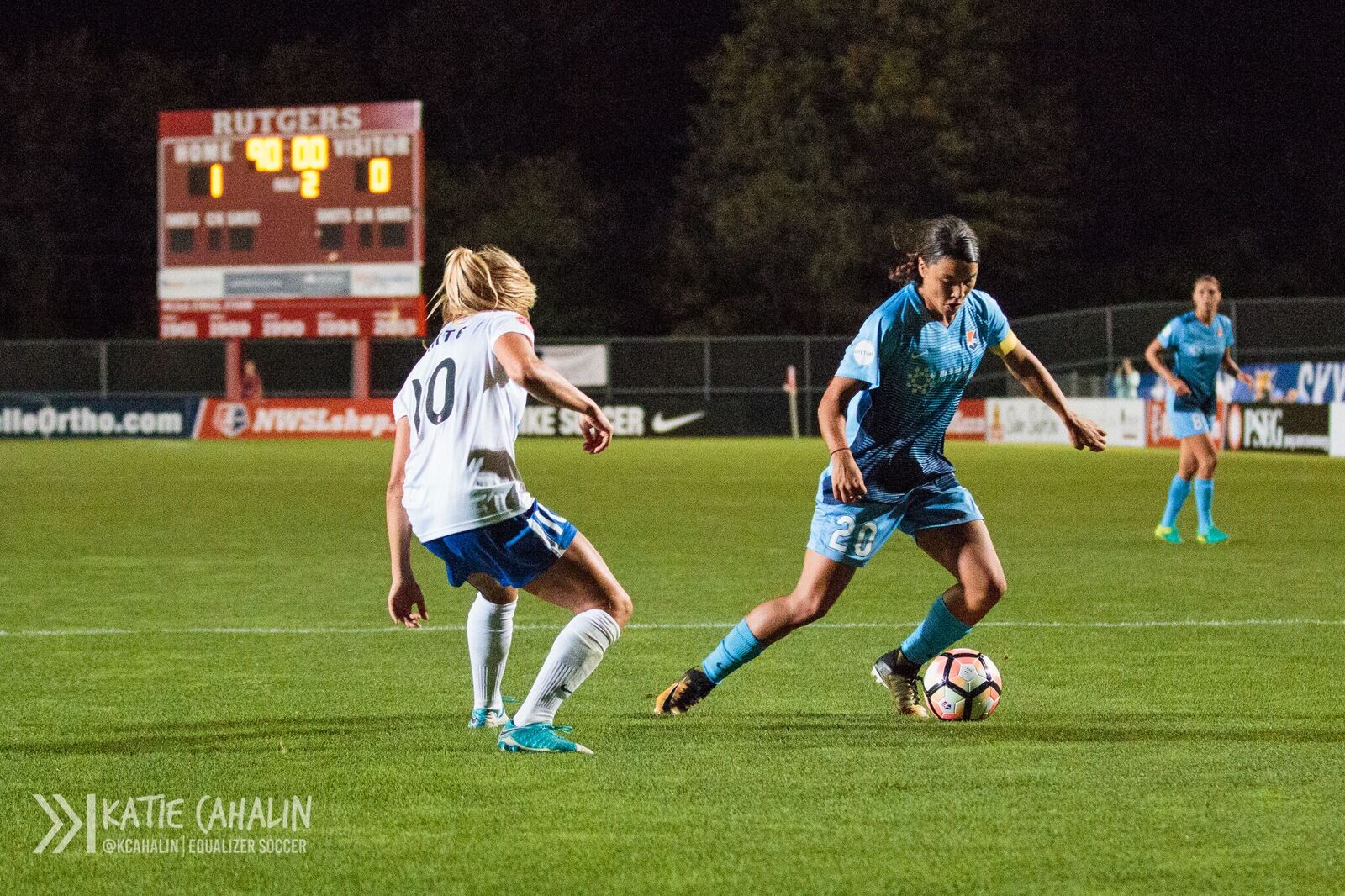 PISCATAWAY, N.J.—Sky Blue FC defeated the Boston Breakers, 1-0, courtesy of a 5th-minute strike from Australian forward Sam Kerr. The result marks the first time in seven games that Sky Blue has not dropped consecutive goals to start a match, and it’s the first shutout for the New Jersey-based club since their July 1 road win against top-ranked North Carolina Courage.

Sam Kerr, known more for her second-half heroics than first-half strikes, gave Sky Blue an early lead in the 5th minute when Nikki Stanton sent a long ball over the field to where Kerr was making a run, catching Boston keeper Abby Smith well off her line outside the 18. Smith chose to attempt to clear the ball before Kerr could get to it but was unsuccessful, and Kerr not only gained possession, but did so with a wide open goal in front of her. Kerr simply had to walk the ball in to score the lone goal of the game.

The goal was Kerr’s 16th on the year, tying the NWSL single-season goals record set by Kim Little in 2014. Kerr’s next goal, which seems more a matter of “when” versus “if,” will see her once again make history this season by adding a single-season goals record to her list of 2017 accomplishments. Despite occurring in the opening minutes of the game, Kerr’s strike was the difference maker in an otherwise lackluster match.

“I’m very frustrated because I feel like we were the better team, had the better chances over the course of the game, and obviously the goal for us is very frustrating because we gave the ball away and, it should be dealt with,” Boston Breakers head coach Matt Beard said after the game.

“We shouldn’t be conceding a goal like that. It was the first five minutes and I thought we responded well to that. We had two great chances—Rosie (White) had one at the death there, (Kailen) Sheridan made a good save at the end as well for Midge (Purce)—so it’s frustrating from our end that we created three or four good opportunities tonight and we’ve obviously not managed to put the ball in the back of the net.”

As Beard said, the night was not without opportunities for the Breakers. The two teams were even in shots taken (12), but the Breakers only had two on goal compared to Sky Blue’s eight. The best chance for the Breakers in the first half came in the 16th minute when Katie Stengel put a hard shot on target from close range, but Sheridan, who looked to be in much better form than in previous matches, was able to make the stop.

One chance for the Breakers came in the 62nd minute when Katie Stengel split a pair of defenders with a through ball to Adriana Leon, who squared up to go one-v-one with Sheridan. However, Kelley O’Hara, who had entered the game just moments prior in her first appearance since before the Tournament of Nations, perfectly timed a slide tackle to poke the ball out from in front of Leon’s foot, denying the Canadian’s chance on goal.

O’Hara’s return is no doubt a relief for a backline that has been plagued by injuries and the mistakes that come with its inexperience, and the combined efforts of Sky Blue’s back five gave the team their first shutout in six games.

“It’s mentality rather than anything else. The girls know how to defend, they know good shape, they know crap shape, and it’s just basically getting into their heads that ‘Maybe I need to bust my ass a little more those few yards.’ I think you saw two-v-ones all over the field today, which is something that has been missing for a while. To be honest, that’s just mentality.”

Although O’Hara made her return following an injury picked up while on national team duty, Rose Lavelle has yet to return from a hamstring injury suffered during the USWNT’s match against Norway on June 11. Lavelle was listed as questionable for tonight’s match and before the game Boston said Lavelle might see 10-15 minutes max, but Beard said following the game that she was simply not ready yet tonight but should be fit for the bench in time for next weekend’s match.

That next match for Boston will be a September 2 road match against the Orlando Pride. Sky Blue will also hit the road for their next match, traveling out to take on FC Kansas City for the final time this season. That match will be on Sunday, September 3.