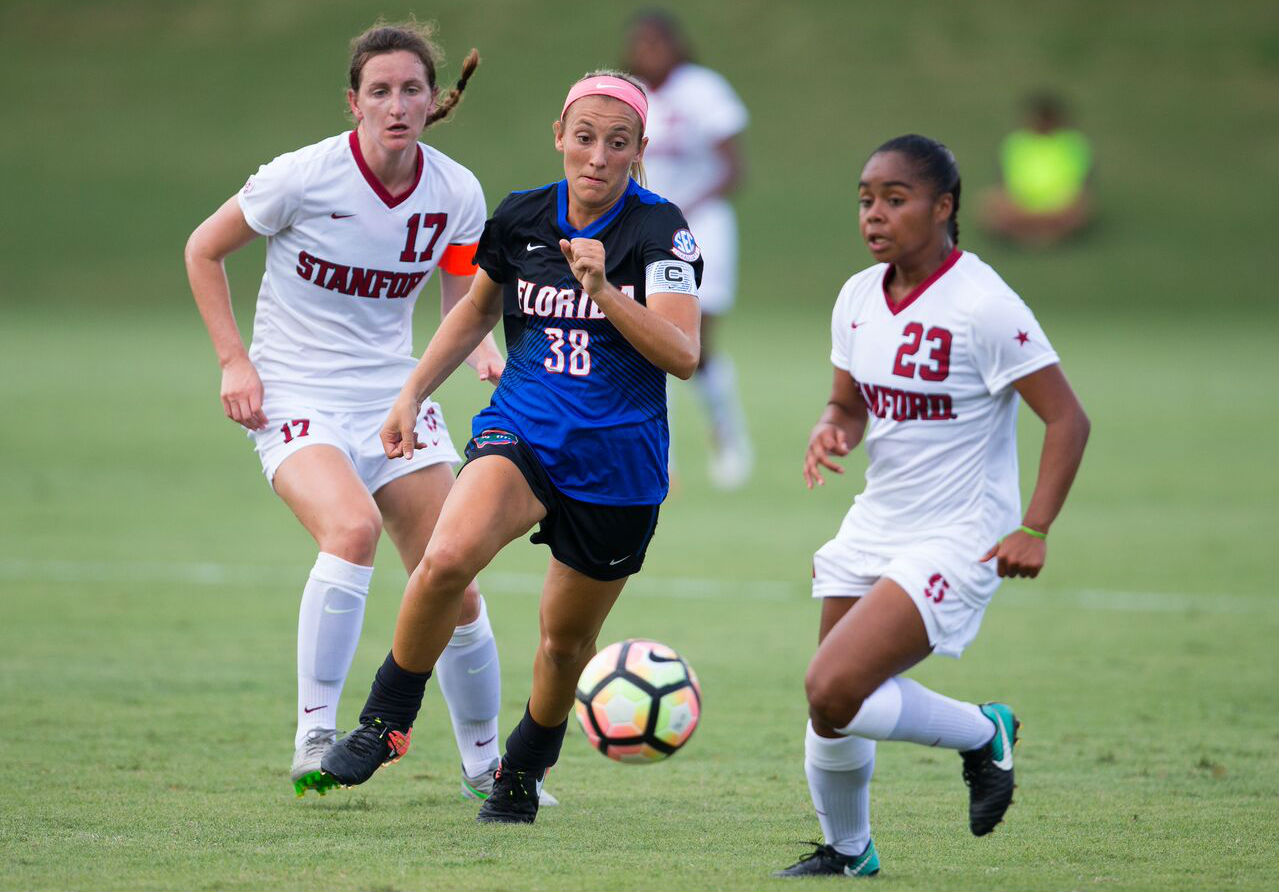 Gabby Seiler scored one of Florida’s three goals in their upset over Stanford. (photo by Matt Stamey/courtesy of Florida)

The joint No. 1 Stanford Cardinal scored first in their third game of the season, but a strong second half by the No. 8 Florida Gators saw them upset the visitors, 3-2. The win was the Gators first ever win over Stanford.

Stanford got on the board first in the 25th minute, courtesy of Catarina Macario, who knocked in her fourth goal in three games for the Cardinal. The goal was set up by Tierna Davidson, one of 30 players included on the MAC Hermann Trophy watch list, who put a shot on frame only to have Susi Espinoza, in her first start for the Gators, parry it away. However, the deflected shot fell right to Macario, who easily one-touched the rebound past Espinoza for the game’s opening goal.

The Cardinal maintained their one-goal lead until late in the first half when Samantha Chung, who entered the game as a substitute, leveled the score. Parker Roberts was instrumental in setting up the goal-scoring play, earning the ball and moving it down the right flank before passing to Madison Alexander, who could have taken a shot of her own but decided instead to pass it back to where Chung stood at the top of the arc. Alison Jahansouz, making her second start of the season, was unable to get a hand on Chung’s shot, and the Gators knotted the game back up shortly before the half.

The second half looked much different than the first, with Florida the more dominant team on the field. That was partly because Gabby Seiler, who many predicted would shoulder the goal-scoring burden in the wake of Savannah Jordan’s graduation, started the half in the midfield, pushed up from where she started at center back. Deanne Rose was also playing in a different spot, allowing her to be more potent in the Gator attack. In the opening minutes of the second half, Rose moved the ball down the near flank to get Florida possession in their final third, and Seiler helped create a number of looks on goal to test Jahansouz.

Despite Florida’s spark of life brought on by Becky Burleigh’s changes to the formation, Stanford retook the lead just shy of the hour mark when Jaye Boissiere maneuvered the ball around three Gators before playing it back to Australia’s Beattie Goad, who was standing unmarked seven yards out and center of goal. Goad nutmegged Espinoza with a left-footed shot to retake the lead for the Cardinal.

However, the Gators were quick to counter, and it was only a tremendous save by Jahansouz that prevented Florida from answering. The keeper was unable to make another save in the 79th minute, when Seiler headed in a cross from Mayra Pelayo to bring the score back level. Moments later, Florida would take their first lead of the night when Brazilian international Lais Araujo was on the receiving end of a Melanie Monteagudo through ball inside the area and scored the go-ahead goal. Florida nearly followed Araujo’s goal with a fourth, but Jahansouz made the stop to keep the visitors within one.

Stanford fought hard in the remaining minutes of the half in attempts of sending the game into overtime, but the Florida defense, as chaotic as it seemed at times, was able to prevent the Cardinal equalizer. With the win, the Gators earned their first ever win over Stanford and remain undefeated on the season. The win also marked the second time a No. 1 team lost this weekend, as West Virginia, who shared the top spot with Stanford, was upset by No. 10 Virginia last night.

The loss, Stanford’s first of 2017, is no doubt disappointing, but it is still early and the team has traveled a lot ot start of their season, playing two games in Milwaukee before traveling straight to Florida for today’s match. They have also been largely without Andi Sullivan, who is being slowly worked back onto the field. Today was her first start after tearing her ACL in Stanford’s last game of 2016, an overtime loss to Santa Clara during the NCAA tournament, but she only played 20-25 minutes each half as head coach Paul Ratcliffe said they are still restricting her minutes as a precaution. The second half was much quieter than the first for the midfielder, with her only memorably play being a perfectly-weighted through ball to an offiside Boissiere. As Sullivan sees more minutes and more touches, Stanford should see better movement and overall performance on the ball.

Up next for the Cardinal is their 2017 home opener against Georgetown, which they’ll play on Friday, September 1 at 7 p.m. ET. As for Florida, they remain home to take on Syracuse on Sunday, August 27 at 7 p.m. ET.