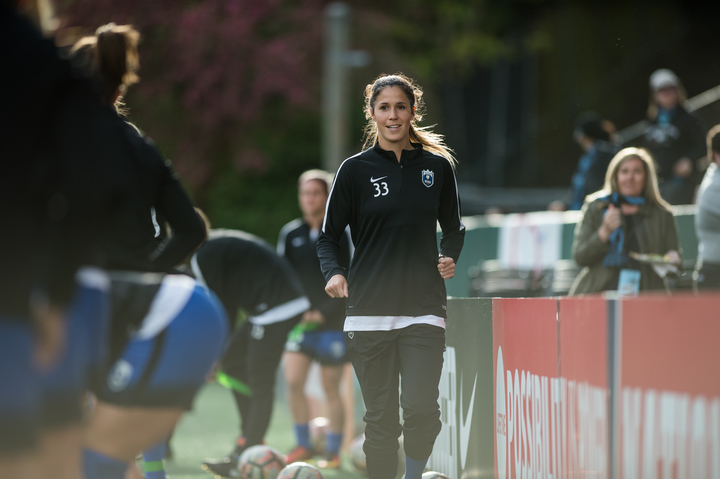 Seattle Reign forward Katie Johnson has had a whirlwind last two years: representing Mexico in Olympic Qualifying, winning a national championship for USC, and scoring some decisive game-winners for her new professional team in her rookie season. I talked with Katie about her time at Seattle, her experience playing with the Mexican national team, and her most memorable moments being a Trojan.

Hannah Kronick: Can you talk about how last week was? You guys won in the last two minutes of the game in Chicago and then were on the opposite side of a similar result at Sky Blue over the weekend — pretty exciting games. How were those for you?

Katie Johnson: Both games, coming from behind and winning and also being up by a lot and giving up the win, showed that you have to bring your best every night, for the whole 90 minutes because any team can win. It’s never over until the whistle blows. It shows from both games that we can do it to other teams, but other teams can also do it to us and you have to bring your A game every time.

HK: How are you guys preparing to host Portland this weekend?

KJ: We need to come out and do our job defensively and get some goals in too. We just need to work hard and focus on the things we do well — and get back into the habit of doing that.

HK: What’s the mindset from your side knowing there are only a handful of regular season games left and that you’re aiming to clinch a playoff spot?

KJ: Obviously, this week’s game is very important – it’s a rival game and we are both fighting for a playoff spot. Hopefully, if we get this win, it will carry over into the next few games but right now we are just focusing on Portland and getting that win first. Then, we will look to the next competition.

HK: What’s been the best part about playing for the Reign for you?

KJ: Just playing good soccer and playing in an environment where I am able to show how I play. I mesh with other players really well because they play the same way. When we do show up, we play really good soccer.

HK: How has it been living in Seattle?

KJ: Oh, I love it! After practice, I go to the lake and go swimming. It’s an amazing area, I love the weather, and I am really happy here. I love this area and the food and everything! 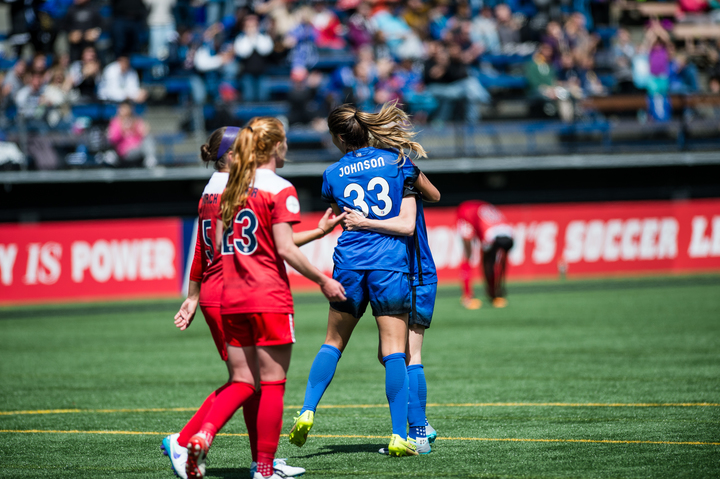 Katie Johnson, 33, celebrating with teammates against the Spirit (photo by Jane Gershovich)

HK: When throughout your time in college did you realize that you wanted to pursue a career in soccer?

KJ: I’ve always wanted to play professionally, but I think after my second ACL and I decided to go play with Mexico, I decided that that would be more of the longevity of my career and see how much further I could push it forward after college. I really wanted to keep going after that. I think I did pretty well my last year in the college season which helped me play in the NWSL and keep going.

HK: I am sure there were tons of awesome, memorable moments from your time at USC. Not to mention, scoring in the College Cup Final and winning a national championship, but if you had to choose one, what was the most memorable from your time there?

KJ: Definitely winning the national championship. I’ve said it so many times, but my freshman year, my team was the last place team and the environment wasn’t that great. The coaches that came in changed the program. They were very smart coaches and did a great job changing the program. It was really nice for me to be able to see that change happen. There was talent my freshman year, I just don’t think it was really used. Everyone came together and really believed we could win during my senior year, and that was really incredible.

HK: Outside of college soccer and jumping to the international level, what’s it been like to play for the Mexican national team?

KJ: It’s been really awesome. I love getting to represent them and experience all of the tournaments. I haven’t done a World Cup or an Olympics which is something I’d like to do — it’s one of my goals to be with Mexico and to be able to compete in both of those competitions. I really like it. I’ve made really good friends and I just love the experience.

HK: Say you’re not playing pro soccer in 15 years, what are you doing? Where do you see your life going outside of soccer?

KJ: I have two things that I would love to do. The first one would be to open my own private training facility. For soccer, I think that would be really cool. The other one would be to flip homes and do some real estate, maybe become a realtor as well. Those have always been my dreams after soccer.

HK: That’s awesome. So, you watch a lot of HGTV?

HK: What are your hobbies outside of soccer?

KJ: I usually go to the lake and hang out. I love swimming, even though I am not a good swimmer, I do like to do that. I also work at a cycling studio, so I spend my time doing that. I train girls too so all of that usually takes up most of my time.

Katie Johnson and the Seattle Reign take on the Portland Thorns at 4p.m. ET on Saturday, Aug 26 as the race for the NWSL playoff spots continue.