Christie Pearce appears to be done playing soccer, and for the moment, done with Sky Blue. (Photo Copyright Linehan Photography for The Equalizer)

One of the great games played at Yurcak Field went down with one of the best players ever to ply her trade there not in attendance. Christie Pearce was not at Yurcak Field on Saturday night, and sources have indicated to The Equalizer that she has distanced herself from the team in the wake of Christy Holly’s resignation last Wednesday. Meanwhile, multiple sources have confirmed that both Holly and Pearce had lost the respect of Sky Blue players and coaches.

Holly’s resignation happened last Wednesday, four days after the team was thumped 5-0 in Orlando for what was a third straight loss. The losses included 14 goals by Sky Blue opponents, and frustration over the match in Orlando brought things to a head. Pearce did not train with the team after that match and began communicating with the club management only through her agent.

Reached by phone on earlier this week, Holly said, “I’ve had the greatest experience with this club. I have nothing but the highest regard for every single player and the highest level of thanks for everything they have done and offered to me on and off the field. I’m very excited to watch each of these players continue to grow, continue to have huge amounts of success as they move forward. At this point in time, I am excited to move on with my new job opportunity which will keep me involved in the soccer world.”

Asked to follow up on losing the locker room, he added, “The players and I share a very high level of mutual respect.” On the staff he said, “The players are the most important people regardless of who the staff are. The staff come and go.” He declined to elaborate on his new job.

Sky Blue owner Steven Temares said he did not have strong enough words to describe his gratitude for both Holly and Pearce and their role in the improved culture around Sky Blue in recent seasons.

“That was a management call,” he said of Holly leaving, the first public inkling that resigning was not the coach’s idea alone. “We discussed with him what some options were. He brought this team together over the last two years. I give him a lot of credit for that. Over the last couple of games, we’ve had some challenges. Sometimes you have to look toward your leader and say, ‘Can we make that change?’”

But asked whether Holly was out because of results, Novo stopped short of saying it was a bottom-line departure. “It was a lot of things. Yes, results have something to do with it. Let’s face it, we’ve had our ups and downs, and going into this last stretch, we’ve had a couple of bad games where we gave up a lot of goals and weren’t able to come back. So results have something to do with it. But it’s a decision that we made together. We spoke for about two and a half hours. We wish him well.”

When the topic turned to Pearce, Novo denied that her Friday announcement that her season was over due to an “accumulation of injuries” had anything to do with Holly being forced out. “Two totally separate things,” he said without elaborating.

“We’ve been talking to her the last week,” Novo said. “Let’s face it, she’s been through a lot of injuries over 42 years. The last two years she’s played through a lot of pain—concussions, knees, backs, ribs, you name it. It takes its wear and tear on a body. She’s not a young girl anymore. She’s a mature woman. She knows her body better than anyone knows her body. Time just caught up to her.

“She’s put her heart and soul into this club. We respect her for that. There is only so much a body can take. We give her a lot of credit for what she’s done.”

Pearce’s agent, Carie Goldberg, told The Equalizer via email that “Christie is a force on the field and has been for decades, but this season has been difficult and after a documented concussion, Achilles issues, knee and back problems, she can’t play at the level she would want and needs to let her body heal. That’s it.” 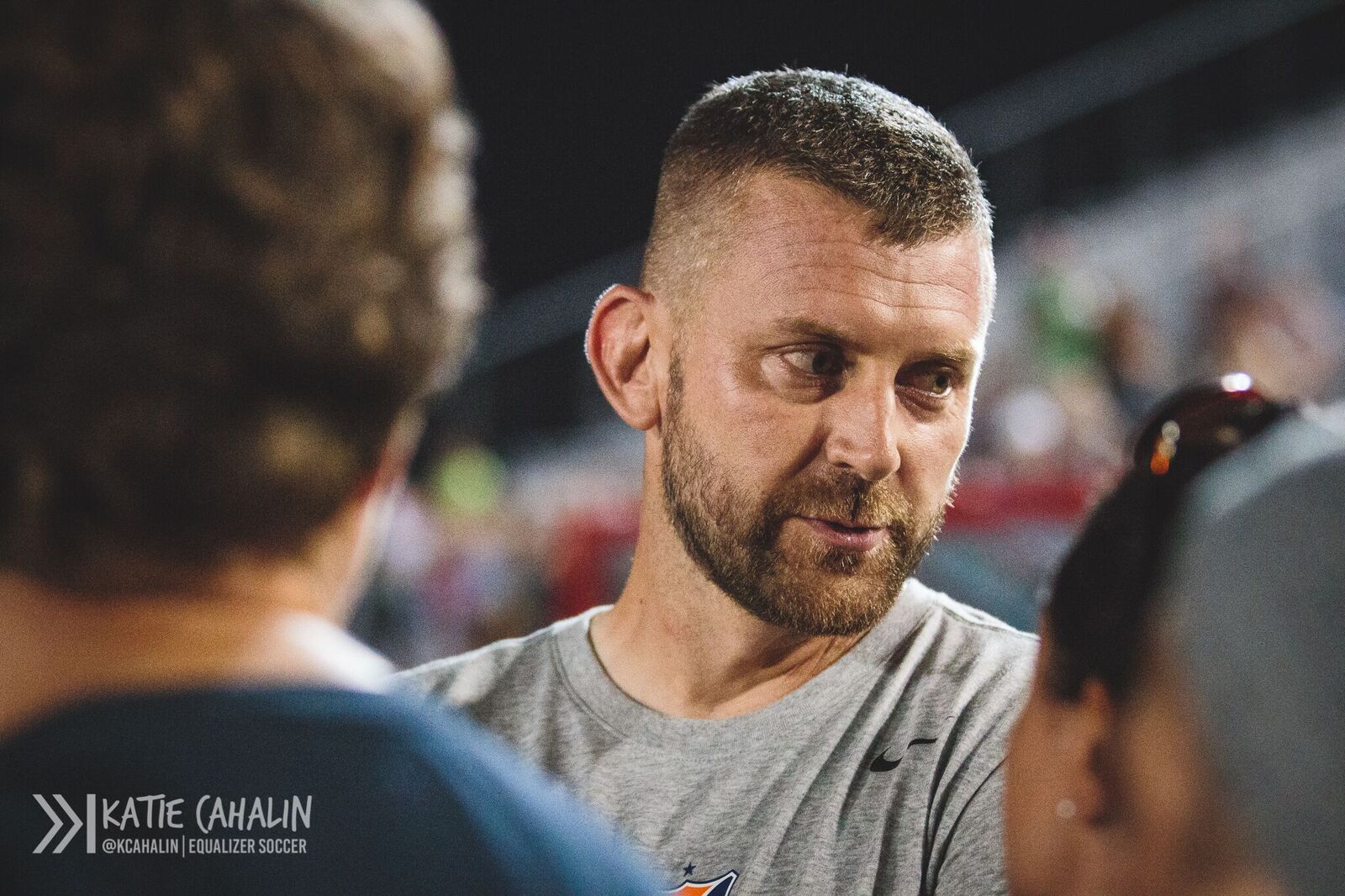 Dave Hodgson, shown here addressing the media, was Sky Blue’s acting coach last weekend but the team has not named an interim (photo copyright Katie Cahalin for The Equalizer)

Sky Blue coaches and players did not take any questions about their departed coach and captain, but they spoke as if a page had been turned. “This is day one,” Erica Skroski said as part of an answer about the backline’s efforts to tighten up.

The club was unsuccessful, per sources, in trying to convince Pearce to simply be listed on the injury report and attend the game rather than announce that her season was over and stay away.

Holly said it is “not totally true” that injured players attend training and matches, but Kelley O’Hara, Leah Galton, and Erin Simon were all on the bench Saturday despite being injured (O’Hara was technically on the game day roster). When Pearce missed the club’s May 6 match in Washington with a concussion, she traveled with the team and sat on the bench.

Novo said the club will welcome Pearce back once she recovers from her injury, but that cannot be to play again this season. An NWSL spokesperson confirmed that Pearce has been added to the Season Ending Injury list and is not eligible to play again in 2017. She previously told Adweek that this was going to be her final season.

As for the future of Sky Blue’s coaching position, it does not appear a specific interim will be named. Dave Hodgson was the coach of record on Saturday, but Novo indicated it is now a collaborative effort that includes fellow assistants Jill Loyden, Paul Greig, and Maria Doriss.

Hodgson and Loyden addressed the media together and did not offer much in the way of soccer discussion. On Sarah Killion missing her first start since July 31, 2016 Hodgson said, “Just our decision.”

Loyden also offered a sharp defense of struggling goalkeeper Kailen Sheridan. “She’s one of the best goalkeepers in the league. Of course we’re going to have her in our starting lineup. We’ve given up a lot of goals, but this is a brand new team. We’re fixing some problems in the back, but she’s still our number one. We have the utmost confidence in her.”

“I think it’s a little shortsighted to blame these goals we’ve conceded on the goalkeeper,” Hodgson jumped in. “She’s an outstanding goalkeeper. She’s made two world class saves, at least, tonight. She’s a good kid.”

Hodgson went on to dodge a question about when he knew Pearce would not be available for the weekend by saying it was a paperwork issue best addressed by Novo and said he found out Holly was leaving when the team released it to the public. That’s when questions about Holly and Pearce were shut down.

When the dust settled, Sky Blue woke up Monday morning a stone’s throw from a playoff position, and they host a Breakers’ team on Saturday that is 1-8-7 since May. But they have also faced multiple-goal deficits in six consecutive matches and before Sam Kerr turned Saturday’s second half into her own personal playground, had conceded 12 consecutive goals without reply. Remarkably, they are 2-3-1 in the six games, with Kerr scoring the decider in the 90th minute or later in all three of the non-losses.