The 2017 NCAA season kicked off Friday afternoon with No. 1 West Virginia defeating No. 5 Georgetown, 1-0. What followed was a weekend full of collegiate competition rife with shutouts, upsets, and even a clash of in-state rivals. Here’s a quick recap of five noteworthy games from this weekend’s NCAA action. 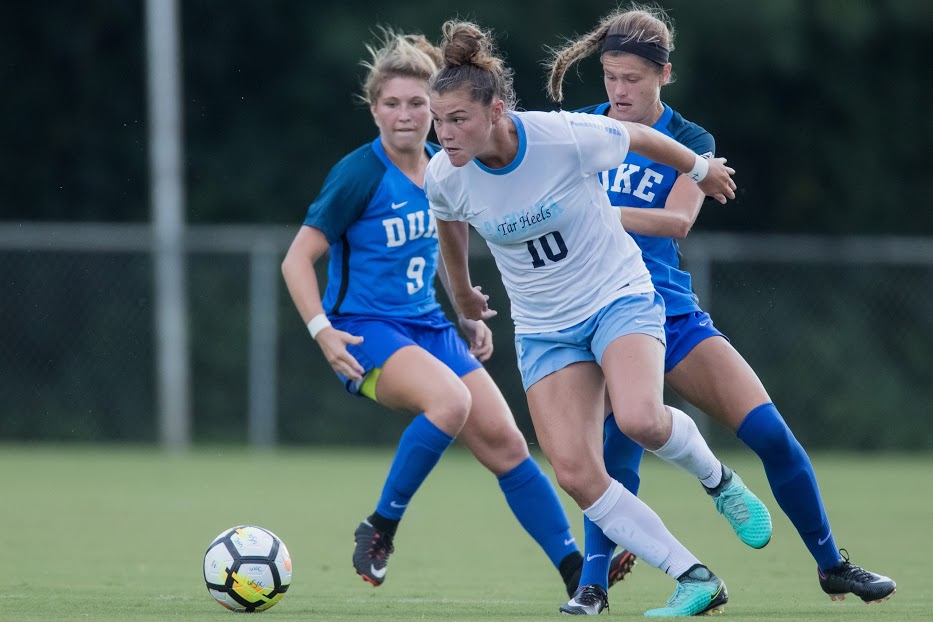 Joanna Boyles scored in her first official appearance for UNC after returning from back-to-back ACL tears. (photo by Shane Lardinois)

In one of the most highly anticipated matches of opening day, Anson Dorrance’s Tar Heels defeated in-state rivals Duke with a 2-1 win in overtime.

Taylor Racioppi put the Blue Devils on the board in the 24th minute, one-timing Ella Stevens’ assist into the back of the net, but the Tar Heels were quick to equalize as Joanna Boyles, in her first official game after suffering back-to-back ACL tears, sent in a free kick that bounced off the crossbar and into goal.

The second half started off with each team earning multiple corner kicks, but neither could score off their set pieces. The two teams engaged in a fierce battle for the final 45 minutes, with each side having a number of opportunities for a game winner. Duke fired off three shots in the final minute of regulation, forcing UNC keeper Samantha Leshnak to make two big saves to send the game into overtime.

Although the Tar Heels were unable to score off any of their previous corners of the match, Jessie Scarpa headed one in nearly three minutes into the first overtime period to score the golden goal and hand the win to UNC.

Duke quickly turned around from the disappointment with a 3-1 win over Xavier Sunday evening, while UNC had the rest of the weekend off.

Unranked Penn State upset No. 8 BYU, 3-1, on Friday night in front of a home crowd of more than 3,500 fans. Junior midfielder Marissa Sheva scored her first career brace to lead the Nittany Lions past the visiting Cougars.

Less than 10 minutes into the match, Sheva scored State’s opening goal of the season when Charlotte Williams found her on the right side of the field and Sheva moved inside the box, going one-v-one with goalkeeper Hannah Clark before beating her with a close-range shot to open her 2017 scoring account.

The Nittany Lions would maintain their one-goal lead throughout the first half, but the Cougars leveled the score in the 57th minute courtesy of freshman Cameron Tucker’s first BYU goal. The home crowd rallied Penn State on, and less than five minutes later they’d retake the lead, scoring a pair of goals in just three minutes.

The first of those goals was scored by Waldgirmes, Germany native Alina Ortega Jurado, whose shot from 20 yards out deflected off a Cougar, past a diving keeper, and into the bottom right corner. Sheva then completed her brace moments later when she sent in a rebound that had deflected but not been cleared by the defense.

Penn State carried the momentum from their season-opening win to their Sunday match against Hofstra, which the Nittany Lions won, 3-0, for their first shutout of the season. BYU returns home Monday night when they will take on Ohio State.

Stanford opened up their 2017 campaign with a rousing 4-0 win on the road against Marquette University on Friday, August 18. Kyra Carusa led the team in scoring, although Catarina Macario and Mariah Lee had one apiece.

Halfway through the first half, Stanford conceded a penalty to the home side, but Cardinal keeper Alison Jahansouz made the save. Stanford then got on the board when Macario set up Tierna Davidson for a long-range shot that pinged off the crossbar, but then Macario put the Cardinal on the board herself when she collected the rebound and fired a right-footed shot into the upper left corner. Marquette nearly equalized before halftime, but Jahansouz was quick off her line to snuff out the dangerous play.

Stanford’s attack really came to life in the second half, with Carusa scoring a brace and Lee adding one in the 74th minute to close out scoring for the night. It was Lee’s first game back after missing all of 2016 with an injury.

Andi Sullivan was left out of the XI and only played 29 minutes in the match, registering one shot on the night. It was her first official game back since tearing her ACL back in November during the NCAA Tournament.

Stanford followed up their season opening victory with another win, this time a 5-0 win over Wisconsin on Sunday night. Sophomore goalkeeper Lauren Rood earned her first shutout in her first start, and Macario finished with a brace in the match. Carusa (penalty), Sam Hiatt, and Civanna Kuhlmann also contributed singles.

Florida State, picked to win the ACC for their fifth consecutive time in a recent coaches’ poll, opened up their official 2017 season in Tallahassee with a 3-0 win over the Southern Conference’s UNCG Spartans.

It was a good night for the Seminoles, but an even better night—and week—for Venezuelan international forward Deyna Castellanos, who netted a hat trick to open up her sophomore campaign with the Seminoles on Friday night. Just a day prior, she had been named a nominee for the Best FIFA Women’s Player of 2017, the highest honor in world soccer.

The Seminoles then extended their home unbeaten streak to 35 matches by defeating South Alabama, 2-1. Junior midfielder Megan Connolly scored a first-half brace to lift FSU past the Jaguars, with Chelsea Followwell putting the visitors on the board at the hour mark.

Florida is one of the strongest women’s soccer programs in the US, and former players like Abby Wambach and Savannah Jordan have left their marks on the women’s collegiate game. With that history in mind, it’s a little mind-boggling how the Florida Gators, the seventh-ranked team in the country and the SEC coaches’ pick to win the conference, struggled on the road to FAU, but they did.

The Gators outshot FAU, 14-2, but Owls goalkeeper Jennifer Ocampo’s nine saves kept the score deadlocked all through regulation. A penalty in Florida’s favor set up the golden goal early in overtime, which redshirt senior Gabby Seiler, recently named to the MAC Hermann Trophy watch list, converted to give Florida their first win of the season.

Becky Burleigh’s side then returned home to Gainesville, where they more convincingly defeated Troy University, 5-0. Seiler, Deanne Rose, Brittney Bennett, Parker Roberts, and Tess Sapone (penalty) each had one goal on the night.