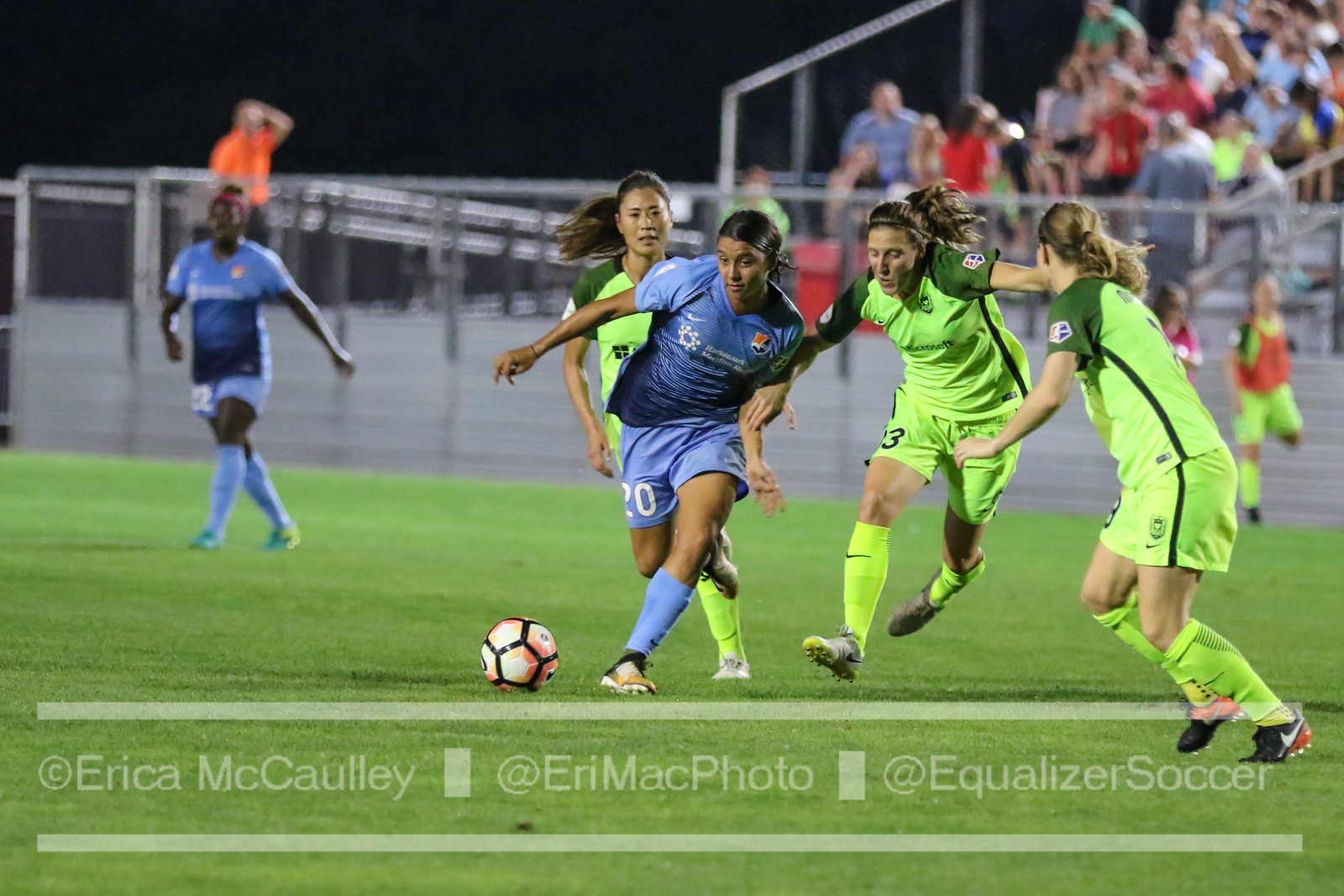 Sam Kerr as she was most of Saturday night, surrounded by Reign defenders. They didn’t stop her from scoring 4 times. (photo copyright EriMacPhoto for The Equalizer)

Sam Kerr finished off the largest comeback in NWSL history by setting the single-game record for most goals scored. Kerr’s 4th of the night, in the 4th minute of stoppage time, gave Sky Blue an improbably, 5-4 victory over Seattle Reign FC in front of the 5th largest crowd to witness an NWSL match at Yurcak Field.

In Sky Blue’s first game since the resignation of head coach Christy Holly and the departure of longtime captain Christie Rampone, the team fell behind 3-0 at halftime. Kerr willed them back to level with three unanswered to become the first NWSL player with two hat tricks in the same season. But Kiersten Dallstream put the Reign back on top in the 85th minute for what looked like a repeat of the team’s matchup in Seattle last month when the Reign prevailed 5-4 after blowing a 4-0 lead. But Maya Hayes tied it in the 91st to set the stage for Kerr’s game-winner.

Adding to the drama was Sky Blue winning a penalty between the equalizer and game-winner only to have Kerr rap it off the crossbar.

Kerr was the acting captain one day after Pearce announced her season was over due to an “accumulation of injuries,” and the absence through injury of Kerr’s new co-captain Kelley O’Hara. Sky Blue were led by their Gang of Four assistant coaches. Dave Hodgson will get the official game coached but duties were shared with Paul Grieg, Jill Loyden, and Maria Doriss. Together they elected to hold Sarah Killion out of the lineup—a decision Hodgson declined to discuss—but she was forced into the match inside 10 minutes when Raquel Rodriguez aggravated a hamstring injury.

By the time Rodriguez exited the Reign were on the board. A Reign throw-in sent Christine Nairn down the right side and she crossed it high where Katie Johnson ran between several Sky Blue defenders and one-timed it past Kailen Sheridan. Soon after Killion came in, it was 2-0. An 18th minute corner kick by Nahomi Kawasumi was tapped by the swinging hand of Sheridan but it went straight at Jessica Fishlock who redirected it in off her midsection. The goal marked the sixth consecutive match in which Sky Blue trailed by multiple goals.

Sky Blue began to play better with two goals to make up and nearly made it out of the half at 2-0. But two minutes into first half stoppage time they allowed a punt from Haley Kopmeyer to bounce in midfield and then gave the Reign too much space to knock the ball into their attacking third. Sheridan badly misjudged Nairn’s proving cross which allowed Kawasumi to stalk the back post and score at a difficult angle to make it 3-0.

Things changed almost immediately after halftime. The Sam Kerr Show began in the 48th minute. A Kayla Mills cross looked like it would be for naught but the Reign were unable to organize and get it cleared. That allowed Kerr to stick a foot in and tap it by Kopmeyer. Goal #1.

Things got really interesting in the 68th minute. Off a Reign corner kick, Daphne Corboz picked it up and hit a magnificent long ball to Kerr. Carson Pickett tracked back but Kerr was able to stave off her defender and beat Kopmeyer to take sole possession of the NWSL goal lead with 13. Goal #2.

Before anyone could process the second goal, the third one happened. In the 71st, Sarah Killion found Kerr who used her first touch to beat Merritt Mathias only to find the other three Reign defenders in her way. Madison Tiernen was nearby and peeled off to the right in an effort to draw either a pass or a defender. No takers. Kerr, undeterred, beat Rebekah Stott and then calmly and cleverly weaved a shot around Kristen McNabb and into the upper corner. Goal #3.

The Reign jumped back on top the 85th minute. Fishlock played a lovely touch that put Rumi Utsugi through but Sheridan made a tremendous save. The ball rebounded to Kiersten Dallstream who took the time she had with Sheridan out of position, settled the ball and scored.

The real drama was only beginning. Sky Blue’s only Kerr-less goal of the night still involved her when she hustled to keep the play alive and moments later Domi Richardson—essentially playing in Pearce’s spot—found Maya Hayes in the center of the penalty box where she had enough space to head it in and make it 4-4.

As Sky Blue pushed for the extra points, a hand ball in the box sent them to the penalty spot. Kerr’s first attempt at a 4th goal rattled off the crossbar. But the Reign never regained possession and eventually gave away a corner kick when Kopmeyer had to dive to keep McNabb’s touch from being an own goal.

Taylor Lytle took the ensuing corner kick and Kerr somehow emerged from a pack of players and headed it up and around Kopmeyer for her 4th of the night, 15th of the season, and a 5-4 Sky Blue victory. Goal #4.

Sky Blue (8-9-2, 26 pts) won for the first time since Kerr’s last hat trick on July 22, snapping a three-game losing streak and four-match winless streak. Sitting 3 points behind the playoff bubble, they’ll stay home for the wee and host the Breakers next Saturday night. The Reign (7-6-6, 27 pts) are two off the pace and host the Thorns next Saturday at Memorial Stadium.