Will Chicago stop the skid? Can anyone catch up to North Carolina? Who will take the fourth place spot? Is Houston for real? Some weeks it’s like we get more questions than answers, but hopefully that’s one trend that gets turned around as we finish NWSL Week 17.

Perhaps no one is watching this game more closely than Orlando, who are only one point behind Seattle and three above Sky Blue. While these two teams have the same number of wins, what separates them is Seattle’s ability to force a draw versus a loss. Once firmly in the mix, Sky Blue has slid to sixth and is only above Houston on a tiebreaker. They were flat out embarrassed in Orlando last weekend, unable to do anything offensively or defensively, and now they are without a head coach as Christy Holly resigned earlier this week. Now would be a really good time for the players to come together and show the rest of the league their mettle. They have the advantage of being at home and being rested, while Seattle had to play in Chicago on Wednesday. Even when Sam Kerr was scoring, Sky Blue still couldn’t keep the other team from doing so, and while Kailen Sheridan is third in the league in saves, the team has the most goals against by 7. Seattle likes to attack from the flanks, so Sky Blue’s outside backs will be crucial. Having Kelley O’Hara back would be huge.

Seattle at least showed the promise of shedding their road woes, if not outright doing so, when they snatched victory from Chicago with a pair of stoppage time goals. Katie Johnson continues to be clutch, and Nahomi Kawasumi – who leads the league in assists and is fourth in chances created – proved again that she can also do it herself. However, it took an immense performance from Haley Kopmeyer in order to keep Seattle in the game for all 90 minutes, and if Kerr does find her feet again, Seattle’s defense, particularly Lauren Barnes, need to do better. The last time these two teams met was a nine-goal shocker that was hands down the most exciting game of this if not any NWSL season, so one way or another, this match isn’t likely to be boring.

Corboz was kept on the bench for the first few games of the season, and looking back it’s hard to justify why. She takes great set pieces, has the most assists on the team, and has created more chances for Sky Blue than anyone not named Kerr. Look for her to be heavily involved in the attack.

Possibly the best rookie Seattle has ever utilized, McNabb has found consistent playing time whether on defense or in the midfield. She leads the team in clearances despite not playing every game and is likely to be vital when it comes to shutting down Sky Blue’s attack.

Keep an eye on:
• Captain and veteran Christie Pearce – if anyone can pull Sky Blue together, it’s her
• Haley Kopmeyer, who leads the league in saves

The Courage won the first meeting between the two.

Nine points in nine days. Given that two of those three games were on the road and one was at notoriously difficult Memorial Stadium, no one expected North Carolina to sweep the stretch. They’ve built themselves a five-point cushion (with a game in hand) at the top of the table once more, and it’s getting harder to see any other team taking the Shield. However, nothing makes you pay more for being lackadaisical than the NWSL, so it’s full steam ahead for the high-flying Courage as they host Washington. Both teams can be brutal on the counter, but the difference is that while North Carolina has four players in the top 20 for shot attempts, Washington only has one (Kristie Mewis), and she comes in at number 19.

For the Spirit, it comes down to their defense. Even when they can score, they can’t keep the ball out of the net no matter how good Stephanie Labbé has been. Part of the reason is that they play an extremely high line that is at odds with their speed and ability to recover. A speedy team like the Courage can exploit that all night long. The Spirit want to avoid getting caught on the ball and work the quick, short passes that exemplify them at their best. Look for Tori Huster to play a big role in this match, taking on some of the dirty work and freeing Meggie Dougherty-Howard to push forward.

Keep an eye on:
• The Mewis sister showdown 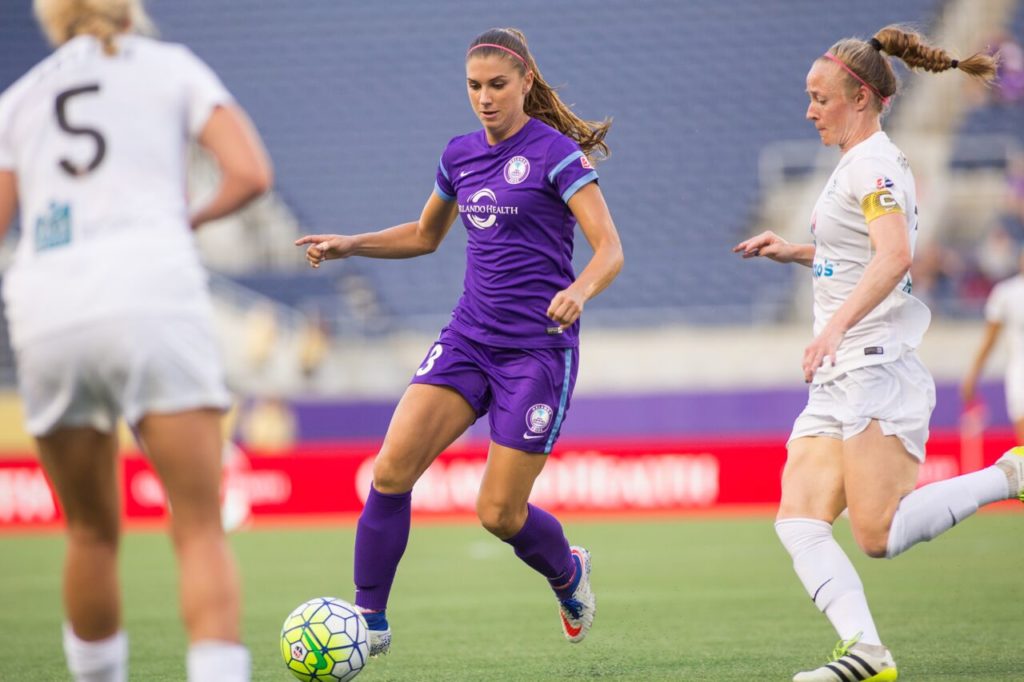 Alex Morgan is on a scoring streak.
(photo by Mark Thor, courtesy of Orlando Pride)

Quite simply, it’s not looking great for Boston. They haven’t won a match since July 1st, and although four of the six games in their current winless streak have been draws, they can’t quite get enough going on offense. On Wednesday, they entered halftime tied in a fairly even game, but the second half was all Houston. Abby Smith is fearless and aggressive off her line but perhaps too much, as one collision gave Houston the opportunity for their first goal and a second earned her a yellow card. They face a Pride team that has brutally punished sloppy defenses in the last two games, so they also want to watch their shape. Margaret Purce is probably out of her depth at right back, although she had a wonderful cross to Natasha Dowie for Boston’s lone goal against Houston, but unfortunately for her and the rest of the Breakers defense, they’ve been pummeled by injuries.

It seems like nearly everything is going right for Orlando these days, although Seattle’s win knocked them out of the playoff spot. Sky Blue had no answers for the Marta and Alex Morgan combo, which grows in chemistry by the day, and Ali Krieger pretty much kept Sam Kerr in her back pocket all match, leading to what was probably Kerr’s quietest game all year. They have Ashlyn Harris back in goal, who didn’t look rusty at all the few times she was called upon. The speed of Adriana Leon on the wing could give them problems if they relax too much. Seattle will retain fourth place if they beat Sky Blue, but Orlando needs all three points in this match to keep them in the running and help their goal differential, which has taken a drastic turn from where it was at the beginning of the season.

Keep an eye on:
• Natasha Dowie, back in goal-scoring form
• Alanna Kennedy, whose ability to switch the point of attack is one of the best in the league

Just when it seemed like Portland was getting it together and gaining momentum with a four-game winning streak, FC Kansas City stopped them (at least temporarily) in their tracks with two unanswered goals to come from behind for all three points. They’re still in second place but not yet back within striking distance of North Carolina, while Chicago is only two points behind. Lindsey Horan did a masterful job of shutting down Carli Lloyd last time these two teams met, and in the absence of Lloyd would do well to do the same thing to Andressinha. Possession will be key, and if they can maintain a high press (both teams will have tired legs), they can pull Houston’s defense out of shape.

Houston’s confidence should be riding high after an excellent second half led them to victory at Boston, but a coast to coast trip after a midweek game won’t do them any favors. They will want to keep numbers behind the ball and have either Cari Roccaro or Cami Privett closely mark Christine Sinclair. Andressinha and Rachel Daly combined well against Boston, playing off Sarah Hagen who often had her back to goal yet still scored a brace. They’ll have a tougher time against Emily Menges, but the biggest test will be in the midfield. Houston must be able to build up more play than they did on their last trip to Providence Park.

Keep an eye on:
• The yellow card – Houston has one player on four, while Portland has two

It took about two and a half minutes for Chicago to go from three points to zero in their second straight loss at home. They’ve been prone to both slow starts (which was a contributor to last week’s loss to Portland) and taking their foot off the gas, doing just enough to get results. It’s kept them in the playoff picture consistently, and barring an unforeseen Red Stars implosion or a sudden surge from another team, it will keep them there, but it’s concerning that teams are starting to figure out and expose their weaknesses in the last stretch of the season. What they need is a truly dominant 90-minute performance (and padding their goal differential, currently only at 4, wouldn’t hurt either). The fact that someone other than Christen Press and Sofia Huerta scored is a good sign. However, their Midwest rival has momentum on their side and is finding their form.

After plummeting to the bottom of the table on the heels of their worst-ever losing streak, FC Kansas City now has two straight wins, one of which was a come from behind snatch of victory from Portland. They are doing much better defensively as of late, with Nicole Barnhart keeping her line organized and tight, keeping FCKC in games until their attack can figure things out. If Becky Sauerbrunn can contain Press, Sydney Leroux can do some damage on the other end against a Red Stars defense that hasn’t looked itself as of late, with or without Alyssa Naeher. They have an advantage on the wings and should make use of Brittany Ratcliffe or Katie Bowen to expose Chicago’s lack of width.

Keep an eye on:
• Vanessa DiBernardo, often overshadowed by Press, Huerta, and Danielle Colaprico
• The partnership between Sauerbrunn and Yael Averbuch