The Lowdown: Taking stock of each team’s playoff chances 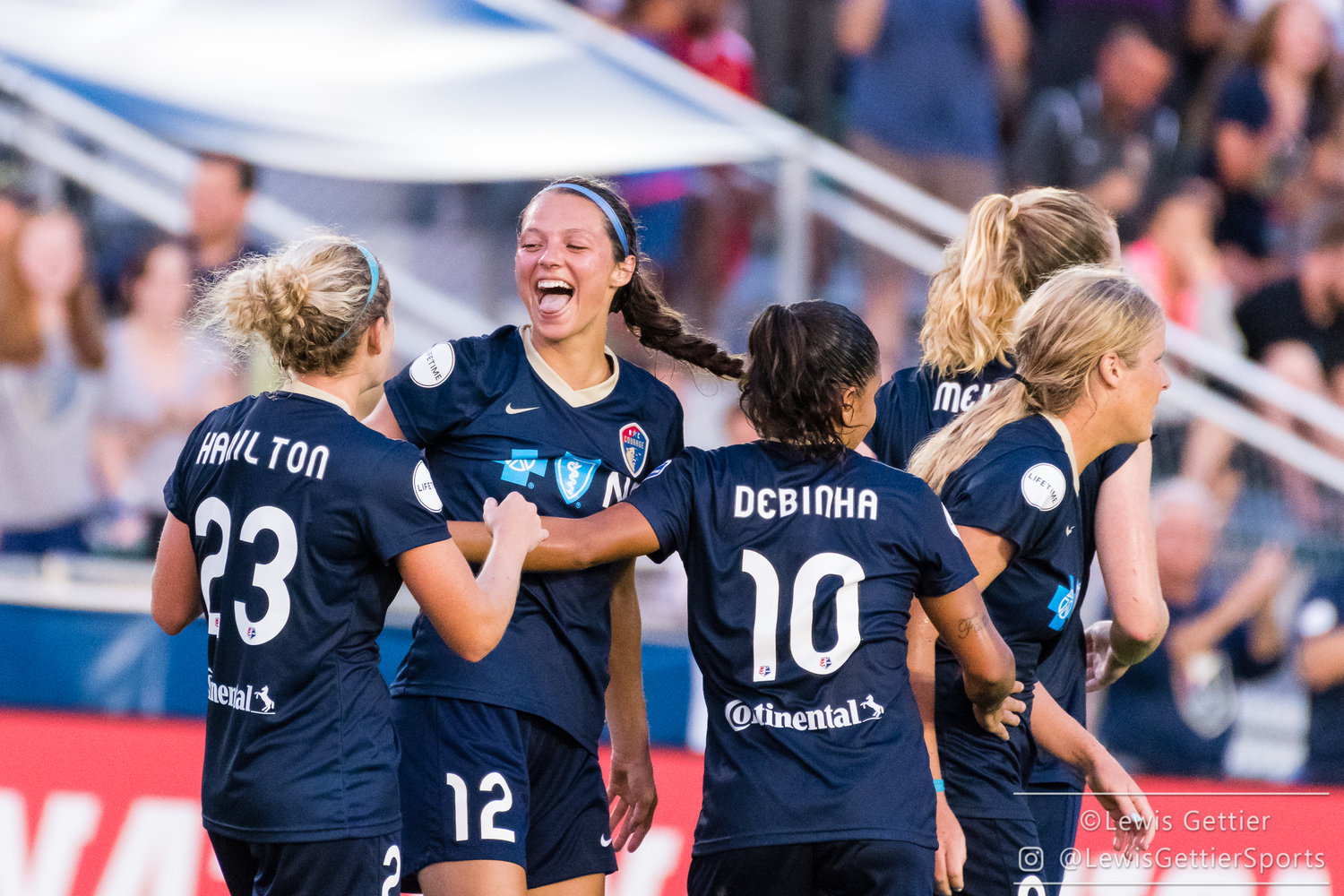 The Courage have had a lot to celebrate this season. (Photo copyright Lewis Gettier)

It’s crunch time in the NWSL season. Following Wednesday night’s three-game slate, all but the Courage and Spirit will have played 18 matches, or three-quarters of the season. No one is officially in or out of the playoffs but in some instances, the final outcome looks to be all but secured. Here’s a progress report on each team as we close in to less than two months until the NWSL Championship in Orlando.

The remarkable thing about the Courage season is that they have done it while making several transitions. Whether it was Paul Riley’s experiment with a three-back or simultaneous injuries to twin tower strikers Lynn Williams and Jess McDonald, the season has not been as smooth as meets the eye in North Carolina. Most recently Debinha, whose form was slipping ahead of Tournament of Nations, has lost her starting position for the time being.

The Courage are tenacious though—and talented. Williams and McDonald are healthy again, Ashley Hatch has proven she can score, and Katelyn Rowland has been the best goalkeeper in NWSL since taking over the starting job for good. They also had a remarkable week where they ripped off nine points in eight days starting with a win over the Reign that saw all four of their U.S. Tournament of Nations players not only suit up but play the full 90. They probably don’t have to win again to be in the playoffs, but they’ll probably win again more than once.

The Thorns are rolling after a dip in form just before Tournament of Nations. Against the Dash two Saturdays ago they possessed the match to death and last weekend’s win at Toyota Park was a rare feet for a road team. Katherine Reynolds’s return has stabilized things defensively on the right side and the side seems to be getting more comfortable without Tobin Heath.

Of note, the Thorns have been better Amandine Henry and/or Allie Long out of the lineup. That’s not meant to disparage either player but it may just be that they overcrowded the midfield with players that are too similar. Like last year, Mark Parsons will have some fascinating decisions to make if he can ever get his full side healthy. Either way the Thorns look headed back to the playoffs where they can make Parsons the first coach to get there four times.

After spending much of the season in the top two the Red Stars dropped a home match to the Thorns this week and are now sitting third. They have had an interesting season on a number of levels. They have been the healthiest side in the league so far, and at times have played the best soccer. On the flipside slow starts and an inability to finish chances consistently have held them back.

A year after getting about as close as you can be to the final without actually playing in the match, the Red Stars have little to prove until the playoffs roll around. And right now it looks like those playoffs will be including the team from Chicago.

Jousting for the final spot

The Pride have made several bold moves since joining NWSL. First they mortgaged several assets to acquire Alex Morgan, and then they made it work to woo Marta back to the United States. Now that the two are getting consistent time together, they are producing soccer magic on a regular basis and the results have reflected it. Things have been better on the defensive end as well with consecutive shutouts last week.

The Pride’s position in the top four is qualified by the Reign having one extra game to play. But so what? The Pride host the Reign on September 9 so the Pride are fully in control over whether or not they qualify for the playoffs. They will need to make sure they don’t revisit the early-season pattern of conceding points through the bad habit of turning off for spells here and there.

The Reign were hit hard by Tournament of Nations when Megan Rapinoe returned with a knee injury. She will miss five weeks but it wouldn’t be surprising if Laura Harvey is planning to be without her for the rest of the season. Can they get to the playoffs without here? Of course they can, but to do so they will need to keep evolving on the back line.

The once stingy Reign have a goals against a tick below 1.50. Haley Kopmeyer has proven to be an adequate starter but calls for her to be in the national team pool may have been a bit premature and her distribution has cost the team at different times this season. A challenging week lies ahead with road matches in Chicago and Sky Blue.

Teetering on the brink

If you came down from outer space and checked the standings and found out which team Sam Kerr played for, logic would dictate that Sky Blue are very much in playoff contention. If you watched them since early July, the eye test would say they are a mess and contenders by numbers only.

Kerr’s 12-minute hat trick on July 8 authored a dramatic, 3-2 win over FC Kansas City. But instead of that portion of the match carrying over, it was the slow start and poor defending that did. Last weekend’s 5-0 loss in Orlando marked the fifth consecutive match in which Sky Blue has trailed by multiple goals. Maybe more troubling is that Kerr barely saw the ball. Beating the Reign at home on Saturday is a virtual must but there is a lot that needs to be righted for this team to make a late surge.

The glitz of the six-match unbeaten run is in the past, and the Dash’s brief contention to sneak into October may be all but a memory. They’re still in a much better place than they were in May, but losses to the Thorns and FC Kansas City exposed some of what ailed the Dash to begin with. Add in Carli Lloyds sprained ankle, the severity of which is still unknown, and the Dash are likely to miss out on postseason for a fourth straight year.

Most inexplicable is the club’s apparent lack of urgency to replace injured Kealia Ohai and released Denise O’Sullivan. With Lloyd and Morgan Brian injured, the Dash are starting out with 16 available players including keepers. 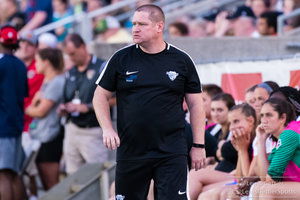 The Blues snapped an unfathomable nine-match winless streak with a victory in Houston on Sunday but it’s not difficult to see that it didn’t happen this season for the two-time champs. The Amy Rodriguez injury altered the entire course of the season but the deeper truth is that things were okay until they fell apart defensively.

As Vlatko Andonovski begins to look at 2018 he must ask himself some difficult questions about the state of his defense. Becky Sauerbrun and Yael Averbuch plus goalkeeper Nicole Barnhart are holdovers from the 2015 championship squad and Brittany Taylor was part of a very stingy defense in 2016. So what broke down that caused FCKC to allow multiple goals in eight of nine games after finishing a stretch of 26 games to account for the eight prior instances?

Here is a troubling statistic. The Breakers are 6-22-9 under Matt Beard which amounts to 0.73 points per game. That is lower than what Tom Durkin produced in his two years during which the team went 10-29-5, 0.80 PPG. Possibly more troubling is that a season after the defense was more for show than it was for preventing goals, it is the attack that has cost the Breakers points in 2017.

So where are they? Three of four 1st round picks have been relative hits but Rose Lavelle is hurt and Midge Purce is the latest right back experiment in America. Natasha Dowie has gone from constant goal scoring threat to bench warmer. The Breakers have not won outside Jordan Field leaving them on five total away wins in nearly five NWSL seasons. And they’re headed for a fifth season without a playoff bid.

It’s not clear if we’re far enough removed from the question of why the Spirit felt the need to dismantle a team that came within a clearance and a penalty save of winning the NWSL Championship, but it is clear that we’re far enough into the rebuild to say that it’s working. The Spirit and their never ending collection of ACL injuries may be propping up the table but many of the club’s young players are starting to find their footing.

Meggie Dougherty Howard looks like a keeper in central midfield and Arielle Ship proved that she has the ability to be in the mix with a goal and two assists at Sky Blue two weekends ago. Havana Solaun, in her first extended play as a professional, leads the team in goals while second year attackers Cheyna Williams and Cali Farquarson could be a bigger part of the rebuild as they were of what was torn down. And don’t forget about Mallory Pugh. It’s not their year, but there are quality pieces in place.

Run of Play: The Life and Times of a Keeper
Week 17 Preview: Another round of midweek games