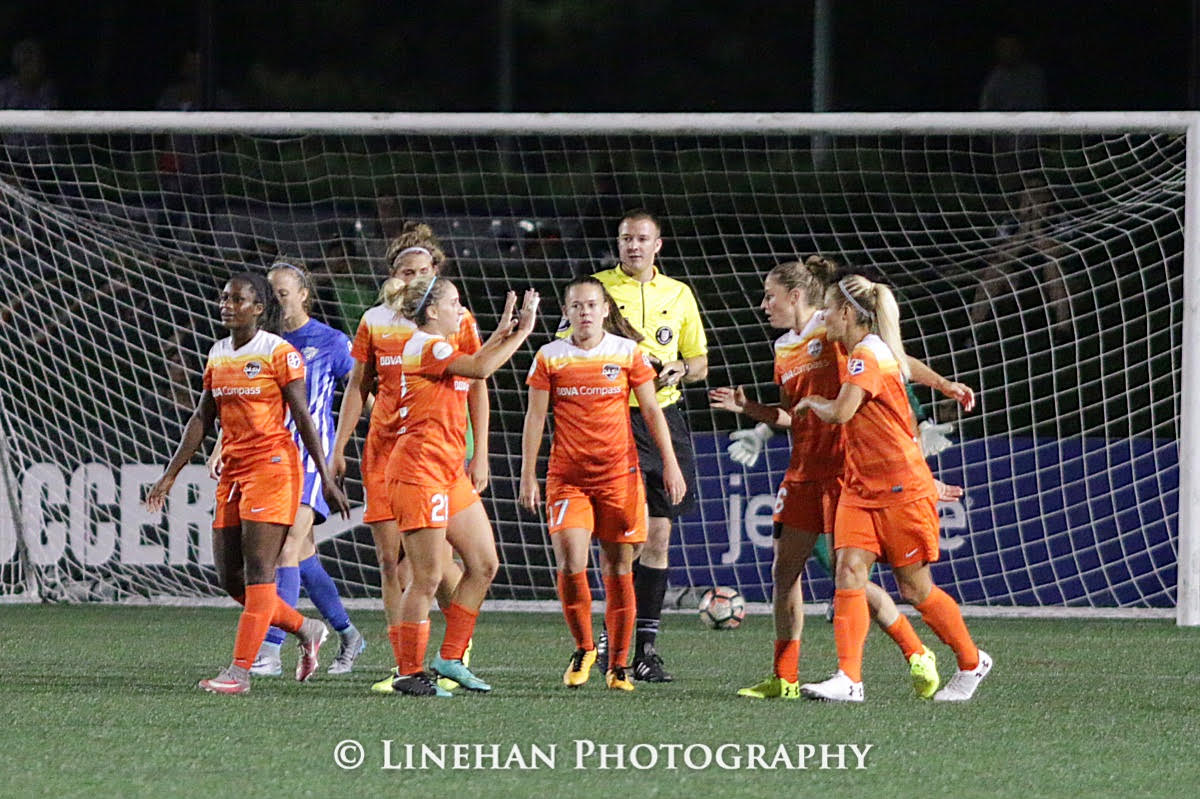 It was a night of records for Houston as Sarah Hagen scored her first NWSL brace to give the Dash a win at Boston, Houston’s first-ever 7th win in a season.

Each team had to make changes due to injury. Sarah Hagen got the nod for Carli Lloyd, and Janine Van Wyk returned to Houston’s backline, while Ifeoma Onumonu got her first start for Boston, Natasha Dowie returned, and Margaret Purce played right back again. This was the third meeting between these teams this year, with the previous matches (both at Houston) ending in a scoreless draw and a 1-0 Dash victory.

It was all Houston early on as Abby Smith was called into action right away, saving a shot on Rachel Daly in the 4th minute before the two collided several minutes later. Smith came out for a punch but got Daly instead, and Hagen was able to tap in the loose ball to put Houston up by one.

Houston took their foot off the gas after their goal, and Boston made them pay. In the 26th minute, Purce got high on the right flank. With plenty of space allowed her by Janine Beckie, she sent a beautiful cross to the far post which Natasha Dowie met on a slashing run with her head, equalizing for the Breakers.

The game continued to be up and down for the rest of the half as each side pushed for the go-ahead goal. Both teams had a chance right before the whistle, as Amber Brooks cleared an Amanda DaCosta shot off the line in the 44th minute, and Andressinha sent a free kick into the crossbar on the last play of first half stoppage after Smith was awarded a yellow card for tackling Nichelle Prince on the edge of the box. The teams went into the locker rooms fairly evenly matched.

However, the second half was all Dash. After the referee was subbed in the 58th minute, limping off the field, Prince sent a great ball to Beckie, her teammate for both club and country. The forward turned midfielder took one touch to settle and sent it past Smith with a clinical finish.

The Breakers scrambled and pressed, but fantastic games from both Daly and Andressinha helped keep the ball in Dash possession and force the Breakers to chase, seeing out the game in fine fashion.

In the 77th minute, Hagen launched a rocket from distance, pinging it off the crossbar, but no one made a run into the box to recover the rebound. Two minutes later, Andressinha sent a great through ball for Poliana, who crossed it into the box close enough to goal that Smith palmed it away with one hand. This time Hagen was there for the loose ball, driving a low roller straight past Smith for her second goal of the night.

79' – Not to be denied a second time @sarahapplehagen gets her second goal of the night and a 3-1 advantage for @HoustonDash. #BOSvHOU pic.twitter.com/2jqhTBBlV9

With ten minutes to go, it was a simple thing to the Dash to close out the match. Adriana Leon tried her best to make something happen for the Breakers, and although they had a few set pieces, which had been dangerous earlier in the match, there was nothing doing. Houston takes home all three points, ending their two-game losing streak.

As the table stands currently, Houston and Boston remain in seventh and ninth place, respectively. The Breakers are winless in their last six games. Houston travels to Portland on Saturday, while Boston hosts Orlando.