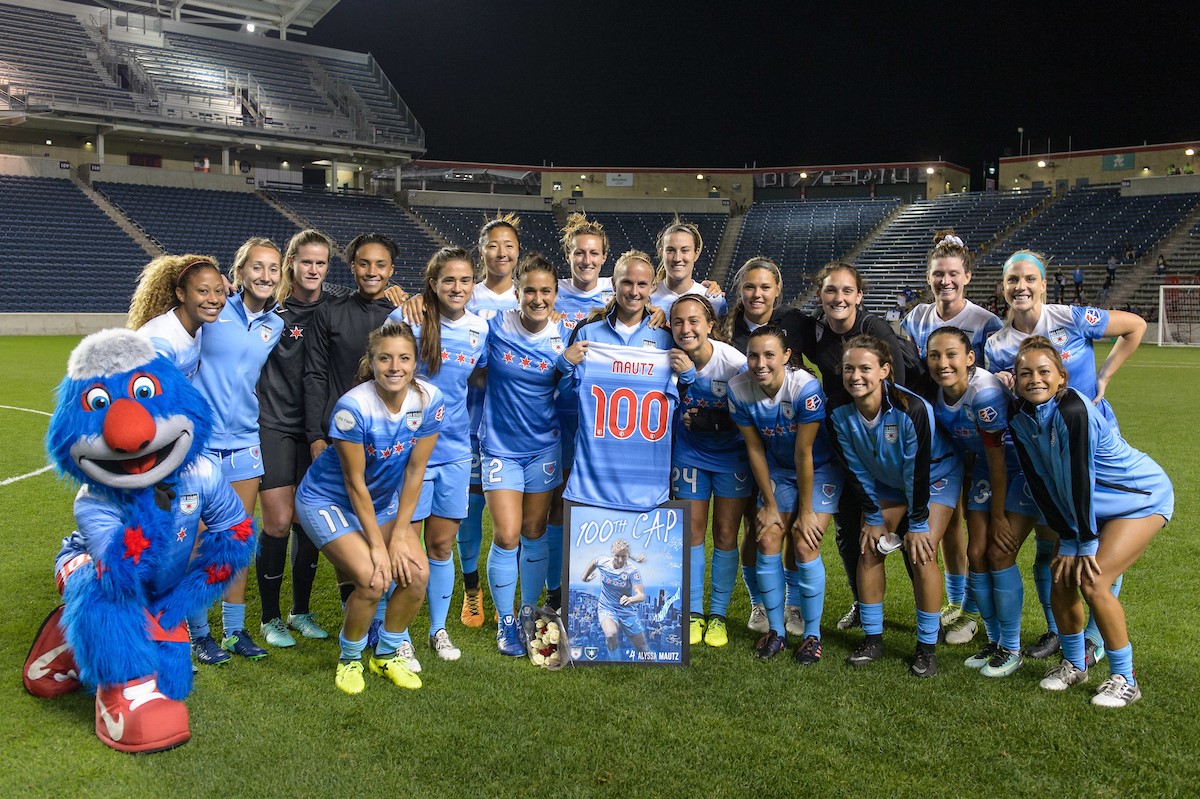 Bridgeview, IL. – Following their match against the Portland Thorns on Saturday night, the Chicago Red Stars took time to honor midfielder Alyssa Mautz, who earned her 100th appearance for the club against Orlando in late July. The celebration included the presentation of a special jersey commemorating the accomplishment, a framed poster, and some kind words from Red Stars’ owner Arnim Whisler.

Mautz, speaking to the media after the game, said it was an “honor” to recognized by the club.

“Every day I just love being a part of this group,” she explained. “The team is awesome, the environment is awesome. I feel like we’ve evolved into a family. It’s been a good opportunity too. These girls are awesome and I like working hard for them every day.”

Known for her tenacity, box-to-box runs, and willingness to sacrifice herself for the cause, Mautz has become a favorite of head coach Rory Dames since joining the club back in 2012, when it competed in the WPSL Elite. Since then, the 28-year-old has been an integral part of the Red Stars and helped build the team from the ground up.

“Alyssa epitomizes the culture we’ve tried to build since I’ve been here—which is team-first, blue-collar, hard work, a lot of grit,” said Dames. “It’s great to see her get that accomplishment. She’s a great human being. I’m very happy for her.”

Julie Ertz, who has played with Mautz for the past four seasons in Chicago, agreed that Mautz’ attitude harkens back to a mentality the club established in its early years.

“She just brings that DNA that was back when this whole thing started,” noted Ertz. “It started from a very tough, battling team, and she brings that to practice every single day. She still has the heart of those players that aren’t here anymore, but that left their legacy.

“I’ve never heard her complain in my entire life,” Ertz added. “She works so hard and that’s the type of player I love playing with.”

After a standout youth career, Mautz eventually ended up at Texas A&M, where she earned All-Big 12 honors. She played briefly with Sky Blue FC in Women’s Professional Soccer (WPS) before the league folded, and then joined the Red Stars the next year.

On Saturday, the St. Louis native gave credit to the players of the Red Stars’ past, particularly noting the impact of former captain Lori Chalupny. The two played together professionally for four seasons with the Red Stars and, on Saturday, Chalupny appeared in a video message played by the club on the jumbotron following the game.

Mautz explained what Chalupny—also a St. Louis native—meant to her, even as a youth player, saying, “Seeing Lori up there. I looked up to her, even in St. Louis.”

Vanessa DiBernardo, who has played with Mautz for four seasons with the Red Stars and abroad for a season with Perth Glory in Australia’s W-League, summed up Mautz’ impact on the club.

“She’s the straight-up definition of what it means to be a Red Star,” said DiBernardo. “She tries 100%, always winning tackles, always recovering. She’s a great teammate on the field and off the field.”