Week 16 Preview: Into the final third

When all is said and done in September, if either Sky Blue or Orlando makes the playoffs, they’ll likely trace their fortunes back to this game. Sky Blue has been in and out of the mix, while Orlando has slowly risen through the ranks. If they want to continue to rise, they need more performances like the second half against Washington earlier this week, and they need to be able to do it for ninety minutes. The Pride were completely dominant, beating the Spirit’s backline twice and punishing Stephanie Labbé with another goal. They have the pace and skill up top to tear Sky Blue’s tenuous defense apart, just as Washington did last weekend, but it’s their own defense they should be concerned about. Sam Kerr will be back, while the Pride had a midweek game. They love to play a high line and have gotten burned more than once. While they held Washington to zero shots on goal last week, which is a good sign, Kerr has rarely been contained by anyone this year and plays creator almost as much as scorer. She will need to be marked very closely, and Alanna Kennedy needs a big game to break up plays before Kerr can get on the end of it. This match will be the last of Maddy Evans’ professional career.

I’ve questioned before what Sky Blue would be without Kerr to carry them, and the answer we got last weekend wasn’t pretty, as they scored first with a very early goal only to completely fall apart in the second half and give up four unanswered goals to Washington. Fortunately, Kerr is back and, despite Kelley O’Hara’s absence once again, can help turn things around. Sky Blue will look to take advantage of their pace in transition, and if Daphne Corboz and Raquel Rodriguez are on top of their games, they can win the midfield battle. This has every potential to be an end-to-end game, and as with the Pride, it’s Sky Blue’s defense that will determine the victor. Christie Pearce will face familiar foe Marta once more, and although neither are in their prime any longer, it could still make for a fierce matchup. However, if Pearce has her hands full, Alex Morgan and Chioma Ubogagu are fully capable of exploiting weaknesses elsewhere.

As the only member of Orlando’s backline (and team) to play every minute so far, Krieger is a stabilizing force on the Pride defense, her speed allowing her to cover large swathes of ground while her teammates push up. She will responsible for limiting Kerr’s effectiveness and will have her hands full for ninety minutes.

Keep an eye on:
• Ashlyn Harris, who faces a big challenge in her first game back from injury

Megan Oyster has been a solid presence in Boston’s backline. (photo by Mike Gridley, ISI Photos)

Washington may be the most mercurial team in the league, which isn’t surprising given they’re one of if not the youngest. After a 4-1 thrashing of Sky Blue, they didn’t manage a single shot on goal in an 0-3 loss at Orlando. They return home this week to host Boston in a game which will determine who holds last place for the week. Expect this game to be battled in the center of the pitch. If Estefania Banini gets more minutes as she returns from injury, she could turn the tide. They’ll want a busier game from Mallory Pugh, who was kept rather quiet by Orlando, and head coach Jim Gabarra may want to give Cheyna Williams a rest, as she was visibly gassed on Tuesday, perhaps returning Kristie Mewis to the pitch. Boston isn’t as fast up top as some teams but can do damage from distance, so Stephanie Labbé wants to watch her line.

Boston appears to be stuck in a perpetual cycle of one step forward, one step back. It looked like they were on their way to fixing their scoring issues last week when Rosie White notched an impressive brace, but the two goals they gave up canceled that out, ending Sammy Jo Prudhomme’s record shutout streak. Having Emilie Haavi back is likely to be a boon in the attack, especially if she can form a partnership with White and Morgan Andrews. Head coach Matt Beard is trying a few things out up top and for the moment appears to have settled on Katie Stengel’s hold-up play as the answer, relegating Natasha Dowie to the bench. Defensively, they don’t really have the depth to handle multiple injuries, so having two defenders out and another one doubtful for this weekend could be a problem. They will look to maintain possession and avoid dangerous midfield turnovers. Look for Abby Smith to return between the posts.

Keep an eye on:
• Shelina Zadorsky – two benchings have already led fans of other teams to shout for a trade
• Megan Oyster, settling in to being a backline anchor 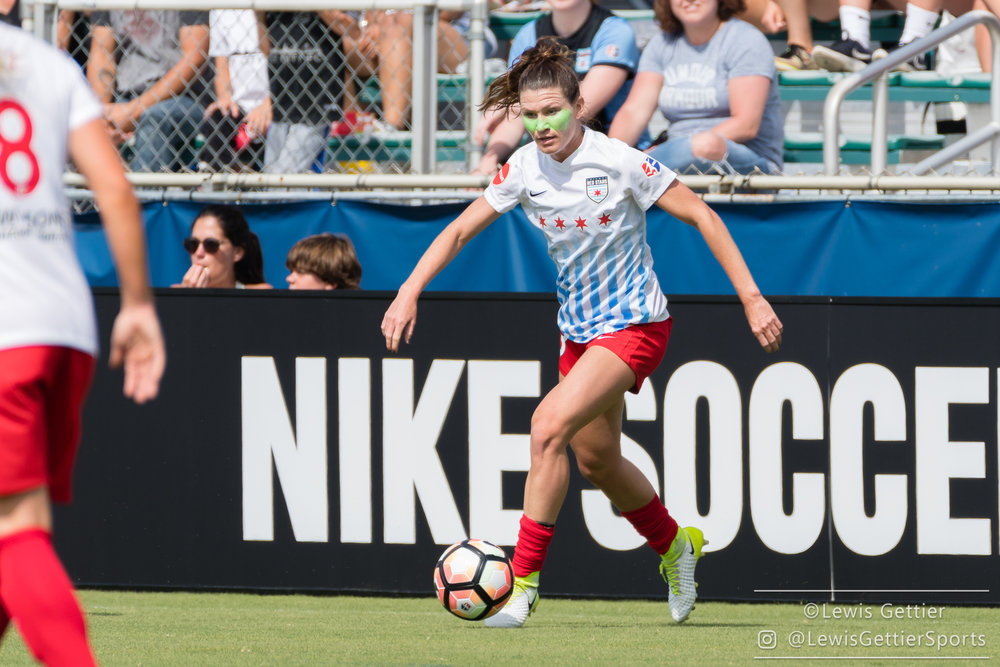 Arin Gilliland has been in and out at right back for Chicago. (photo copyright Lewis Gettier)

As the top three teams begin to separate themselves from the rest of the pack, this game could be crucial for the victor when it comes to securing a home semifinal (although neither has had luck with that in the past). These two teams have scored the same amount of goals, and Chicago has only given up one more than Portland, so they’re also well matched. Helped by the woodwork more than once, Chicago showed off their depth in a win over Orlando. Their starters will be back in what is likely to be one of the more tactical battles we see this season. Chicago finds much of their success when they go long to Christen Press, allowing her to sit on a center back’s shoulder until she can turn and break free. Emily Sonnett and Emily Menges are fairly effective in not allowing that to happen, and Adrianna Franch is quick off her line when it does. Look for Sofia Huerta to provide width and take advantage of the space Meghan Klingenberg leaves in behind.

Portland has only won once on the road so far this season, and Chicago hasn’t lost at home. In fact, Chicago hasn’t lost at all since June 28. In order for the Thorns to keep their three-game winning streak alive, they need to replicate their dominant game against Houston last week. They won both possession and second balls, and let Christine Sinclair pull the strings all over the pitch in what was not only one of her best performances of the year, but one of the best performances of the week of all games. Tyler Lussi was also dynamic, and Lindsey Horan was particularly aggressive, getting the best of Carli Lloyd in both halves. If Horan can provide the same presence, hounding Vanessa DiBernardo and Danielle Colaprico into giving up the ball and quickly switching attack, she will give the Thorns a big advantage.

Keep an eye on:
• Sinclair versus Julie Ertz 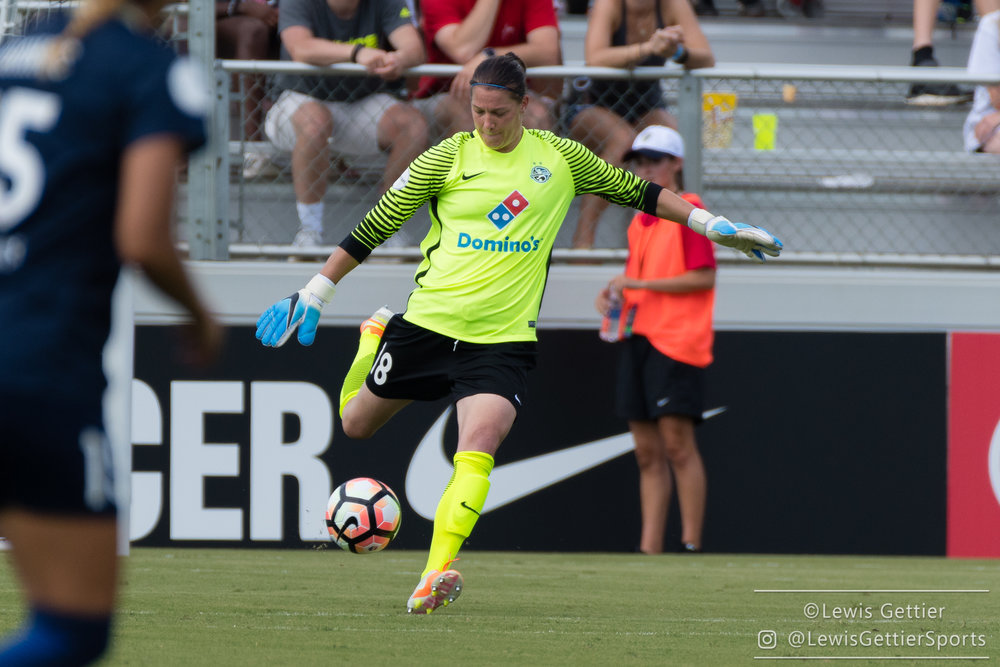 In a strange twist, this is a series in which the away team generally plays better, with FCKC having a surprisingly strong record at BBVA Compass Stadium. However, the Dash have never been more primed to begin to change that narrative. They played a good first half in Portland last week but were simply unable to keep the ball, and they showed that when Carli Lloyd is cut out of the equation, the attack suffers noticeably. They will also want more from Rachel Daly, who is usually a workhorse but had one of her least effective performances ever. They’ll be glad to return Andressinha to the starting lineup, although her substitute, Caity Heap, was one of the best players on the field for Houston at times and might have earned herself another chance in place of someone like Janine Beckie. FCKC is likely to attempt to play out of the back, so a high press will serve Houston well.

FCKC looked headed for another draw yesterday and is likely disappointed to have given up such a late goal. They had a few good looks against North Carolina, especially when they tried a long ball, but they seem committed to playing out of the back. Returning Becky Sauerbrunn made an obvious improvement, as she did well to cut out many attacks, and she was the hero in Houston last year when she scored a game-winning header. FCKC needs to get their outside backs into the attack more frequently and try to stretch Houston’s backline. Too often the attack is forced up the spine with no width, making it easy for multiple opponents to close in. 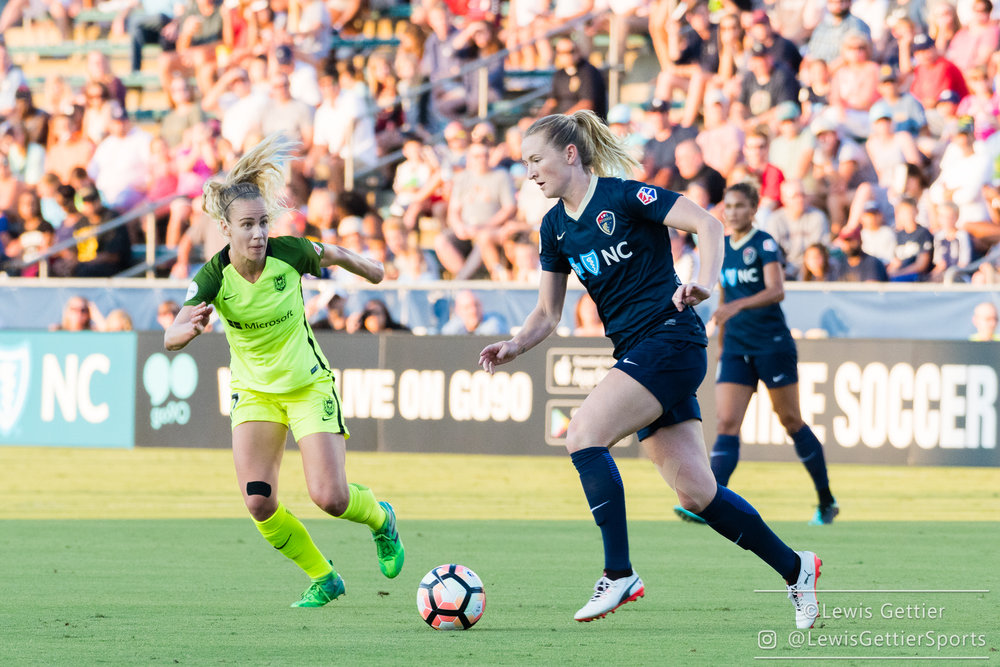 North Carolina has three more wins than any other team this season, but they travel to face a Seattle side which is 27-2-12 at Memorial Stadium. They’re going to have to be more efficient than they have in recent weeks, as Seattle is less likely to give up quality chances than Washington or FCKC. North Carolina creates so many strong attacks but can be incredibly wasteful, such as at Kansas City yesterday, which until Lynn Williams’ late goal looked like nearly all shots were going wide. However, what separates them from Seattle is defense, leading to a classic matchup of the league’s best offense versus the league’s best defense.

Rapinoe’s absence made all the difference last week against North Carolina, and the Reign will be without her once again after the forward underwent knee surgery earlier this week. Both Sky Blue and Orlando are only one point behind Seattle, so they need all three to avoid giving up that vital fourth place spot.