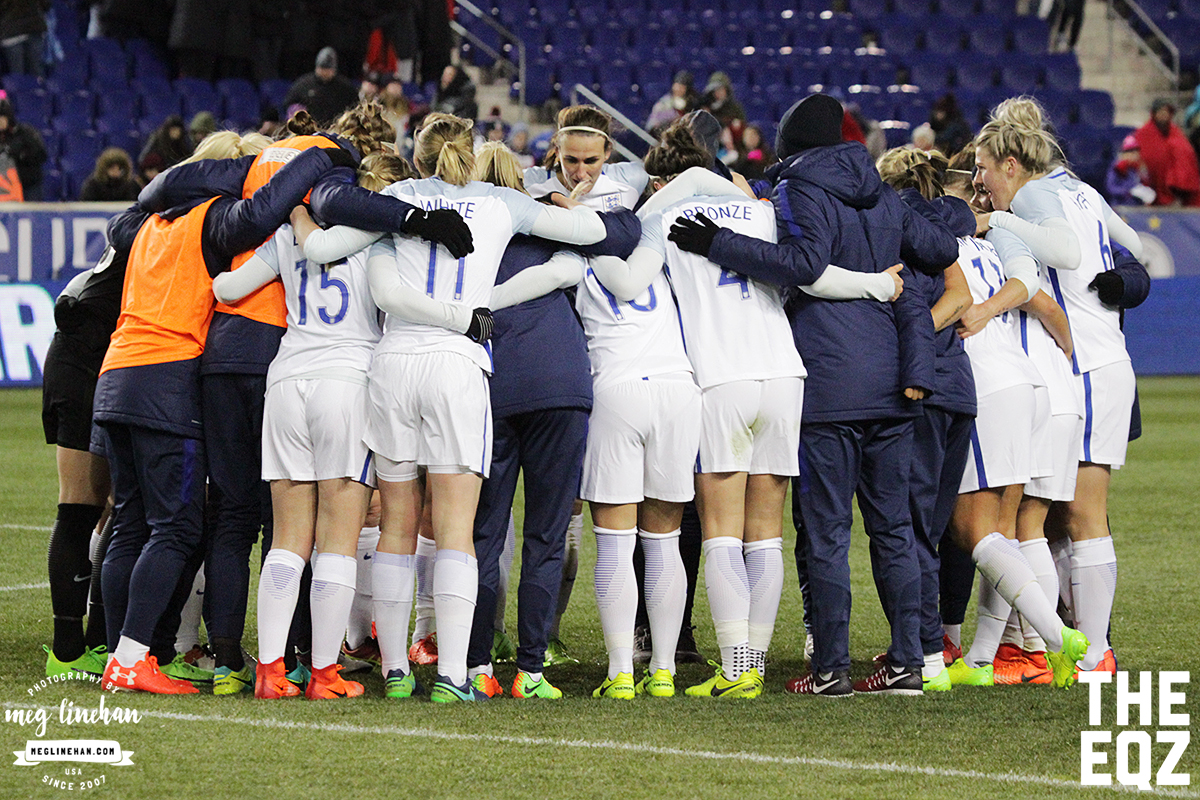 The future of the Lionesses is somewhat in doubt following their EURO 2017 exit. (MEG LINEHAN/Equalizer Soccer)

ENSCHEDE, Netherlands – The England dream is over after a shocking 3-0 loss to the Netherlands in the semifinals. Mark Sampson’s squad looked second best for much of the 90 minutes, struggling to build momentum before 27,093 supporters cheering on the “Orange.” Uncharacteristic defensive mistakes hurt England, and it just wasn’t meant to be.

It could have been a far different match for England if they were awarded a first half penalty. Shoves in the back to Jodie Taylor and Ellen White in the Netherlands box weren’t called. French referee, Stephanie Frappart had clearly put her whistle away.

“I think both teams gave just gave 100 percent,” said a visibly disappointed Jordan Nobbs. “We had chances, and decisions didn’t go our way. We could have had a penalty shot, and it probably would have changed the game. Two penalty shots, but we’ve just got to accept what happened and take it on the chin.”

The midfield absence of Jill Scott, suspended for yellow card accumulation, tremendously hurt England. They missed her energy, compete level, and height. Holland controlled the midfield battle while Jade Moore and Fara Williams were struggling to gain and keep possession.

Netherlands manager Sarina Wiegman had her tactics spot on. They stopped long balls over the top to Jodie Taylor and prevented any England attack along the flanks. England’s bread and butter set play to Taylor was unavailable, and they had no plan B.

“They definitely stopped us feeding Jodie and getting her on the ball,” Nobbs said. “Yeah, I don’t know, I think I need to watch it back and see what went wrong. I think we had our chances, and it just wasn’t our day.”

The crowd certainly energized the Netherlands and provided an electric atmosphere inside FC Twente Stadion. The pressure to make a call against the home side would not have been well received. How much did the crowd play a factor in the match?

“I don’t think it did [for us]. I don’t know if it did on the ref,”  said an honest Nobbs. “I think we had some decisions, and maybe we need to watch them back. I think two big penalty shots would have changed the game. I don’t think that [the noise] affected us. We still gave it our all until the last-minute.”

While the standard of refereeing certainly needs to be better in women’s football, the Arsenal midfielder was not attempting to single out the officiating at Euro 2017.

“To be honest, I think they’ve been great,” Nobbs said. “I’m not trying to aim it at that, but naturally a big decision like that, it’s something that can change the game. If it doesn’t go your way, sometimes you might not get that second chance, but obviously we’ve got to accept that we didn’t make the other chances. We’ve got to just carry on and lift our heads up.”

England simply went up against a team that was in peak form with a fantastic starting XI that they could not contend with. Shanice van de Sanden caused all sorts of trouble for Demi Stokes. Steph Houghton and Millie Bright looked average at best anchoring the back-line, and the Golden Boot leader was left on an island up top.

The addition of Fara Williams was a head scratcher. Mark Sampson out thought himself with her inclusion. The Arsenal player’s best days are behind her, and she couldn’t keep up. Her unfortunate back-pass header to an unsuspecting Siobhan Chamberlain was deposited by Danielle van de Donk, and that was curtains for England’s tournament.

“It’s unfortunate,” said Jodie Taylor. “Fara’s got a long time left in her career. She’s nowhere near from being  done. It’s just unfortunate, wasn’t it…? Credit to Holland, they put the chances away.”

Absolutely gutted. So proud of this team. Incredible memories. We will come back stronger #Lionesses pic.twitter.com/ppeSeHCTfZ

As England turn their attention to 2019 FIFA World Cup Qualifiers next month, the biggest question remains the future of Mark Sampson. It’s quite possible that he could be poached to coach the England men’s U-21 squad or simply men’s football in general.

“Absolutely,” said Taylor. “I really hope he doesn’t get poached and move on. He’s been fantastic for this group, seeing how far we’ve come under him in such a short space of time. I really hope he’s still here because we’ve got a lot more to do.”

While he might be the man for the job. Sampson was non-committal about his future when The Equalizer spoke to him in the mixed zone. A gaffer never lost for words, Sampson wanted to take time to sit down with his family.

“At the moment, from my point of view, the last 12 months for a head coach at a major championship year is incredibly difficult. You’ve got to make a hell of a lot of sacrifices, like the players. This year has been the most special of my life – my young daughter’s been born, and Mum has given up so much of her time. Hasn’t gone back to work yet to make sure Dad could give his all to the team. First I want to go back home and spend some time with family, because I’ve missed them, and I hope they’ve missed me.”

Is he going to think about it?

“I want to spend some time with family. I want to go home, and tell them how much I love them and tell them how proud I am for what they’ve done over the last year to help me have one of the most special years of my life, both professionally and personally.”

Proud of our @England players & staff you gave everything over the last 12 months to achieve something special. Thank you #Lionesses

England have taken massive steps to grow, and achieve new heights with Mark Sampson. It would be a shame if he left before winning a championship with England. Sometimes the pitch grass doesn’t always look greener on the other side. Sampson and the Lionesses likely need to continue together if England is to take the next step forward at the 2019 World Cup.