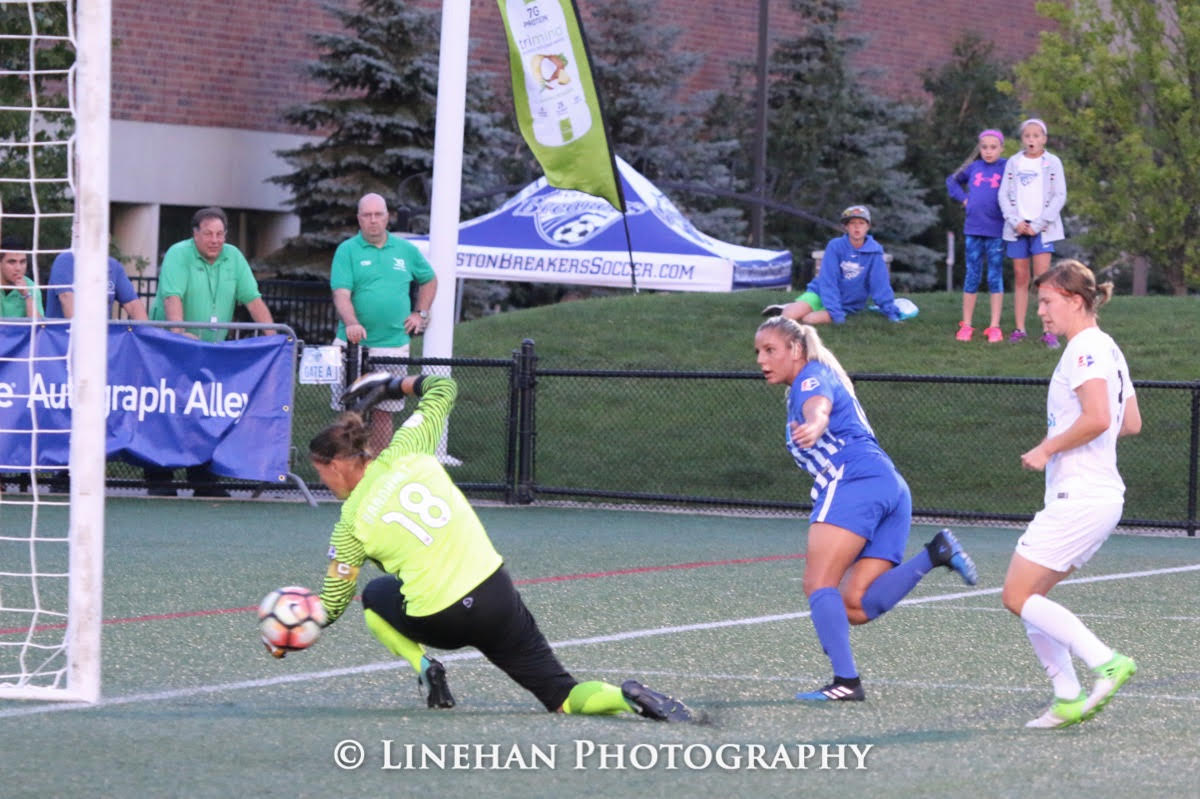 When a player nets a brace in four minutes, it’s an easy assumption to think one team is dominating and will walk away with a win. Not so in Boston, where Kansas City took the lead initially only for the Breakers to take it back, but they couldn’t hold on.

The game started off slowly with each team taking their time to settle in and get a feel for each other. Each team had an early chance, but Shea Groom’s toe poke was wide, and Katie Stengel wasn’t ready for a ball in from Tiffany Weimer. In fact, the game was so flat, the ball had to be substituted due to low air.

Perhaps that was what finally kicked things off, as soon after, Desiree Scott made a 60-yard dribble down the center of the pitch in the 21st minute, sending in a lovely through ball to Christina Gibbons. The rookie sent in a low cross that placed it perfectly at the feet of Maegan Kelly, and it was an easy tap in to start off the scoring.

In the 26th minute, Rosie White responded with a goal that came out of nowhere. Adriana Leon passed it in to Stengel on top of the box, who neatly laid it off for an oncoming White. White took one touch to launch it into the upper 90 of the near post, with nothing Nicole Barnhart could do.

Just four minutes later, it was White again. Morgan Andrews took a corner short to Leon, who passed it into the path of White, making an unmarked run toward the box. Becca Moros couldn’t get there in time to prevent White from getting off another one-touch shot, this time curling into far post above both Barnhart and Scott.

After another four-minute span, the Breakers came close to doubling their lead. White launched a cross across the box to find Leon on the far side. A bounce took it past Moros, and hesitation from Barnhart gave Leon the time to slip it underneath the keeper, but the post stood firm.

The game became bogged down again for much of the second half. FCKC slowly worked their way back in, and while Boston enjoyed control for much of the first half, winning most second balls, Kansas City came out of the locker room with more vigor than they’d shown previously, stringing together passes and enjoying better possession. Each team took several shots, but nothing troubled either goalkeeper until the 76th minute, when Barnhart had to make a diving one-handed save to push Leon’s shot wide.

In the 81st minute, substitute Erika Tymrak took a rather audacious shot from the far corner of the box. It was a difficult angle, but she put a great bend on it and managed to send it through lots of traffic without deflection and evade Prudhomme, who couldn’t track it before it hit the net.

In a reflection of the rest of the game, the last ten minutes were neither fast nor furious, although each team continued to push for the go-ahead goal. The game ended in a draw, and although FC Kansas City likely feels relief at taking a point home, Boston will be disappointed.

The game stops FCKC’s losing streak at four, although they still haven’t won since May. Washington’s victory over Sky Blue means Kansas City drops to last place, and they host second-place North Carolina next Thursday. Boston sits in eighth place, on a four-game winless streak, and travel to Washington next weekend.

Friday Roundup: Morgan and Lyon to come to terms on option within next few weeks
Rookies power Spirit to 4-1 win over Sky Blue