The Lowdown: Dash rolling with new staff, stable back four 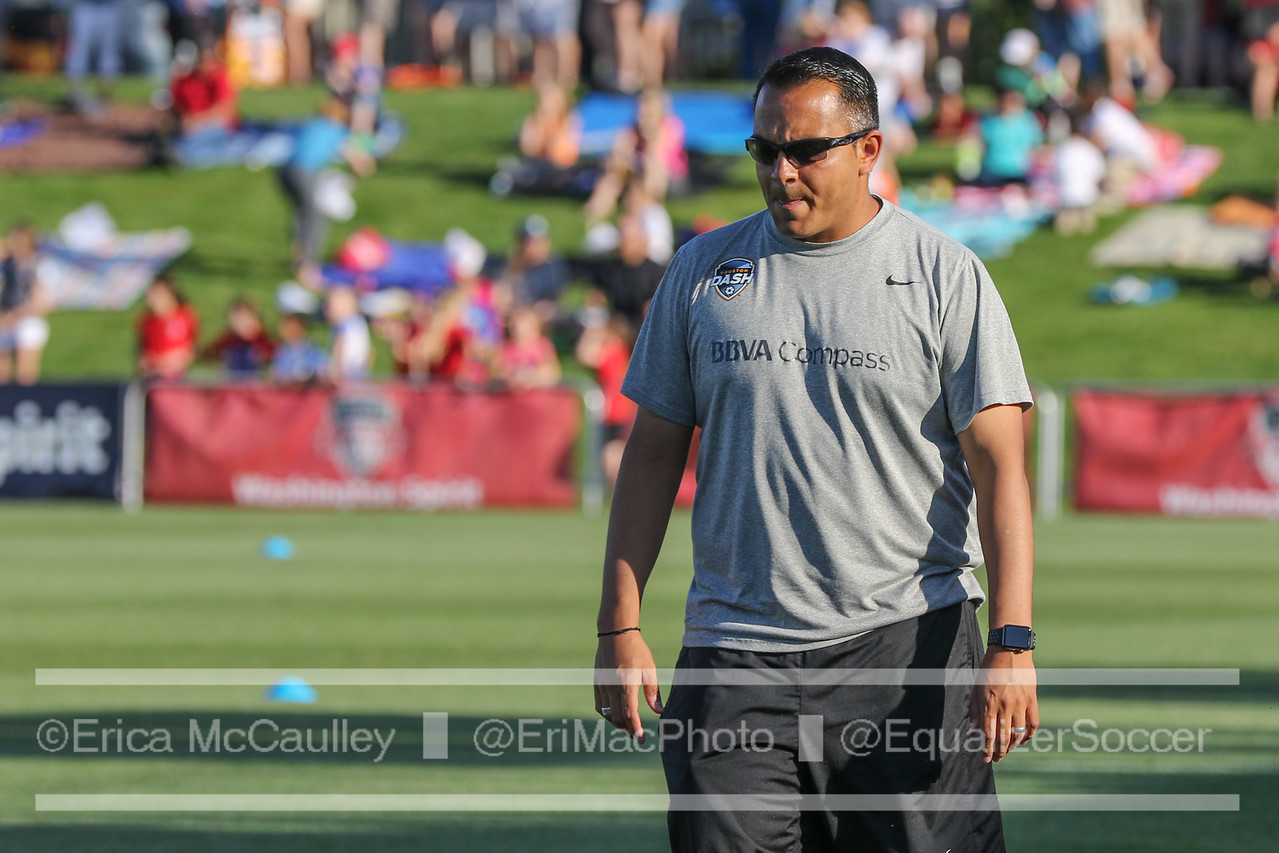 Dash interim head coach Omar Morales has the club on a 6-match unbeaten streak and sniffing a playoff position. (photo copyright EriMc Photo for The Equalizer)

Amber Brooks spent last week’s FIFA break back home in North Carolina. She did the same during the last FIFA window in early June. This one was different though. In June, the Houston Dash were a mess, losers of five in a row. This time, as July turned to August, there are brighter times in Houston. When the team visits Portland on Saturday it will be riding a club-record, six-match unbeaten streak and a season that appeared lost on Memorial Day could end with a playoff berth.

“I went back to my mom’s house and I was just telling my family how much better a place myself and the team is than the last time I was home,” Brooks told The Equalizer this week.

So how did the Dash turn a 2-7-0 start into a 6-7-2 record? Several factors come to mind, but it all began on May 29—Memorial Day—when the club dismissed founding head coach Randy Waldrum and replaced him with assistant Omar Morales.

“I got a phone call from Chris (Canetti, Dash president) and said that they were going to part ways with Randy and they were asking me to take over.”

Morales made it clear he was interested in the position, which was initially for a week but has since turned into a gig for the rest of the season. But Morales still considers Waldrum a mentor and wanted to make sure there would be no hard feelings from the man who brought him to Houston earlier this year. Once Waldrum have his blessing, Morales went ahead and began to reshape the culture.

“The first message to the team was just to get back to work,” Morales said. “We’re going to short-term it and get better every day.”

“He’s simplified things,” Brooks said. “Win the first tackle, score the first goal, win the first half. Realistic goals that we can check off. That builds our confidence.”

Morales and assistant Kenny Bundy have now set about making every training session more competitive. “The biggest change for us is we made every part of the session more intense and more competitive than it was,” Morales said. “Making sure we get the most out of every player the entire time. And making sure that we’re getting better every day, every session, every time we touch the ball. Players want to get better and players want to be coached. I think that’s the biggest difference the last couple of weeks.”

Still things did not start great for Morales. Five days after the coaching change, Morales took the Dash to Washington where they lost 2-0. Many players left straight from that game for some time off, and when they returned two weeks later for Morales’s first home game, Marta tore them to shreds in a game the Pride raced out to a 4-0 lead. The Dash pulled two goals back late, but their sixth loss in a row had them still searching.

“It couldn’t get any worse to be honest,” Brooks said. “But that’s when our formation changed. I went to the back line and we went to a diamond midfield.”

One of the hallmarks of the Waldrum era was inconsistency at the back. The club was allocated Whitney Engen for its expansion season but she was a late arrival from Europe and the moved in the deal that brought Carli Lloyd to Houston. The Dash have struggled to find cohesion in the back ever since.

“It’s kind of a two-fold thing,” Morales explained. “We wanted to stop the goals we were conceding. We wanted to make sure that was stabilized. At the time Bruna (Benites) wasn’t healthy so we felt like Amber would be a good fit for us to the way we wanted to play in the back. So we made that change.”

Brooks now starts central next to Janine Van Wyk with Poliana and Cami Levin on the flanks. Poliana may get a breather on Saturday following the Tournament of Nations, but that aside Dash fans can now start their game day with a pretty good idea about which players will start on defense.

It’s been great that we’ve been able to settle in and have a consistent back line,” Brooks said. “We work well with other. We don’t ever want to get beat but when we do we’re not afraid to make those last ditch tackles and really set the tone back there. I think that really needed to be done. It’s not to say that we don’t have other quality players but finding that combination and finding that consistent where you don’t have players rotating all the time and having that solid back line can really do a lot for you.”

Not to be forgotten is Jane Campbell who was given the starting nod on June 24 for the return match against the Pride in Orlando. The rookie kept a clean sheet that day in a 2-0 win. The team has not lost since. The back four plus Campbell have not conceded more than a single girl in any of the six games. On the road to 2-7-0 the Dash had two clean sheets and seven games surrendering two or more goals.

The new setup also helped Campbell and Brooks to be voted to the NWSL Team of the Month for July.

There were changes up top as well. Carli Lloyd returned from Manchester City after the FIFA break and after questioning the team’s fitness after the 4-2 loss to the Pride, scored the opener a week later and has generally been playing well. The Dash also lost Kealia Ohai for a torn ACL which has opened the door for rookie Nichelle Prince to earn regular time up top.

Nichelle has come in and given us some of that spark that Kealia had given us,” Morales said.

Morales said he does not look at the standings—“My wife is actually in charge of all that”—which is true to his constant preaching about short-terming it. The road remains a difficult one. There is a four-point gap to the Reign where the playoff line sits and Sky Blue also sit between the Dash and the top four. A late-season stretch will see four straight games against the Courage, Reign, and Thorns. The six-game unbeaten run includes a draw with the Thorns and five results against the bottom four clubs on the table.

“I have a basic understanding of where we are but I do’t read too much into it,” Morales said. “At this point this team needs to be short term and not looking ahead”

Neither Morales nor Brooks made any direct comments about Waldrum but both seem to agree that a change at the top was needed.

“I think the change came well to the team as far as having a different voice,” Morales said.

“The biggest thing is we just needed a change,” she said. “Losing is honestly contagious, and then it becomes negative, and it was like we just couldn’t even see the light anymore. I think he was part of that change. When you’re constantly losing, you lose the will to compete. I think most people who were aware of the situation recognized it probably last year to be honest. “

The change did not suit everyone. Morales’s other message when he addressed the team for the first time as head coach was that he would not be able to keep 20 players happy. One player who fell on the wrong side of the happiness line was Denise O’Sullivan. Morales called her in and they agreed the best thing for O’Sullivan was to cut does. She has since been claimed off waivers by the Courage.

Morales wasn’t about to dwell on it though. “I’m happy for her,” he said. To do anything else would be to break ranks with his outlook of staying in the here and now—short-terming it. Morales did not even want to say much about his job status beyond this season.

“We have nine games left but the most important game is Saturday in Portland. If we take care of business we’re one step closer to what everybody is talking about, the playoffs, but for us it’s just about getting better.”

-Lydia Williams suffered a quad strain training with Australia and should miss about a month. The Dash have signed Bianca Henninger as a goalkeeper replacement. Henning was the Dash backup keeper from the club’s inception until she was released this preseason.

-The Breakers are also into the goalkeeper replacement pool inking Jaime Gillis. The 29-year old figures to be around only for Friday night’s game while Abby Smith returns from the Tournament of Nations. Meanwhile, Sammy Jo Prudhomme will see about building on her club records of three shutouts in a rown and 316 straight shutout minutes.

-Abby Dahlkemper’s consecutive minute streak is up to 4,680 but that would appear to be in jeopardy after she played 90 minutes for the United States on Thursday. If it does end it’s hard to think of a better reason why.

-The next longest current streak belongs to Nicole Barnhart (3,510) while the next longest streak for a field player is Brittany Taylor (2,970). Should there be separate listings for keepers and outfield players? Probably.

-Four players from the 2016 USWNT Olympic roster have played every minute in NWSL since – Sam Mewis, Christen Press, Becky Sauerbrunn, and Emily Sonnett. I expect all of those streaks to end this weekend with the exception of Sonnett who has not been in with the US this year.