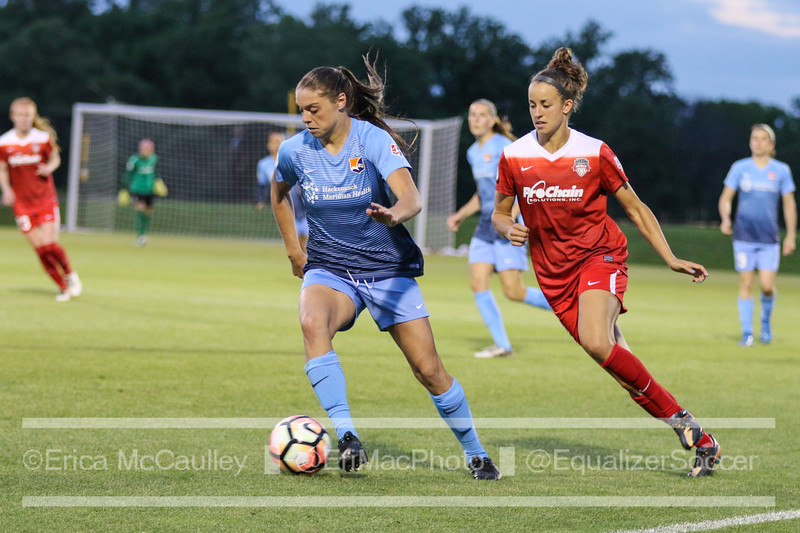 It was a night of firsts for the Washington Spirit. Both Arielle Ship and Meggie Dougherty-Howard scored the first goals of their professional careers, helping the Washington Spirit (4-8-3, 15 points) to their first road win of 2017, defeating Sky Blue FC (7-8-2, 23 points), 4-1. Four second-half goals powered the Spirit past a one-goal deficit to earn the win.

Both rookies had memorable nights, playing parts in multiple goals. Ship scored the Spirit’s opening goal, a rocket from just inside the box to level the score. She then assisted on both Cheyna Williams’ and Dougherty-Howard’s goal to finish her night. In addition to also scoring her own goal, Dougherty-Howard drew a foul in the area to earn the Spirit a penalty kick, which Havana Solaun converted to round out the Spirit’s four goals.

“If we had anything besides bad luck, we’d have no luck, so we’ve been looking and waiting for some kind of a break, kind of the tide to turn, and certainly it didn’t look like it was going to happen in the first half,” Spirit head coach Jim Gabarra said after the game. “We were flat, sluggish, and we were just looking for a way at halftime to find something to kind of get them to snap out of it, and we changed our shape a little bit and we wanted to get them on the front foot and press them and get a little more out of the press and get some confidence, and I think the players really took that in their teeth and ran with it.”

The Spirit went down a goal in the first half when, for the third time this season, Sky Blue scored a goal in the opening five minutes. That goal came in just the second minute on a play originating on a throw in that ended with McKenzie Meehan sending in a cross in front of the box. Daphne Corboz stretched out just enough to get her foot on the cross, redirecting it so that Maya Hayes could split a pair of defenders with a shot tucked just inside the far post.

Even with a shaky defense—Kelley O’Hara has yet to return from national team and Mandy Freeman is still recovering from an ankle sprain, and Erin Simon is on the 45-day disabled list—Sky Blue was able to maintain that one-goal lead into the half. Unfortunately for the home side, it was very much a tale of two halves, and the Spirit scored four unanswered goals to easily walk away with three points.

“There was no difference [between the first and second halves],” Sky Blue head coach Christy Holly said. “We didn’t perform tonight, from the first whistle to the last whistle. There’s a lot of things getting masked over in the first half, but the reality is we should have been up 4-0 at halftime. There’s no if’s or but’s about it, we should’ve been up 4-0 at halftime, so we’ve got to take this one on ourselves. It’s unacceptable to leave that many goals and that many opportunities and to be so inefficient in front of goal, so that must improve. You don’t concede goals like we did in pro soccer.”

Sky Blue were sorely missing Sam Kerr, who had yet to return from competing in the Tournament of Nations with Australia. Kerr has scored in each of the past five games, including several last minute, results-changing goals to earn points for the New Jersey-based club. Without Kerr or O’Hara—whose presence was missed on both sides of the ball—Sky Blue struggled offensively.

The Spirit didn’t have the same problem, at least not in the second half, scoring four goals for just the second time this season. The first time was also against Sky Blue, a May 6 match that the Spirit also won, that time 4-3. Francisca Ordega lead the attack in that match, but tonight it was largely Arielle Ship.

Ship leveled the score in the 52nd minute when she beat Christie Pearce to a lobbed pass from Tori Huster and made a break on goal, sending a rocket into the near upper 90 from just inside the 18. She nearly had a second one not 10 minutes later when a goal kick from Labbe bounced into space in front of her. Domi Richardson, making her first professional start for Sky Blue, took a touch to pass it back to Sheridan, who came off her line to clear just as Ship got to the ball. Ship took a touch to put the ball past Sheridan, but the angle put it just wide of goal. However, Cheyna Williams was there to redirect the ball into the back of the net, scoring the game winner off Ship’s assist.

Ship then connected with Dougherty-Howard in the 75th minute, sending a ball through the Sky Blue defense and right to Dougherty-Howard’s feet. With three defenders surrounding her, Dougherty-Howard fired off a low shot that blasted past Sheridan’s diving attempt at the save. She then drew a foul to give the Spirit a penalty kick in the final minute of regulation time, which Havana Solaun easily put past Sheridan, who had been shaken up on a play and looked worse for the wear by the end of the night.

“It’s just seemed like she’s gotten into the final third or the penalty area and not really been natural and instinctive,” Gabarra said about Ship following the match. “She’s been kind of thinking and hesitating and not really confident, and she just took the ball and shot it and it was a great shot, so then it was like, ‘Alright, all the weight’s off your shoulders. Now you can relax and just go play and not think.’ I think it’s a big, huge game for her, and she had some people here watching, and it was certainly well deserved.

“I think the same’s true for Meggie. Meggie’s done so much for us, and it’s gone largely unnoticed and for her to do the work that she’s done game in and game out and be a dominant midfielder in this league as a rookie against the best players in the world. For her to get the opportunity to get a goal and draw a penalty, I couldn’t be happier for any of them.”

With the win, the Spirit now move into 9th place, while Sky Blue remains in 5th place. The Spirit return home to the Maryland Soccerplex to face the Boston Breakers on Saturday, August 12 at 3:30 p.m. ET for the Lifetime Game of the Week. Sky Blue next hits the road to face the Pride for the final time this season, playing in Orlando on Saturday, August 12 at 7:30 p.m. ET.